Because I never can get enough of animals. 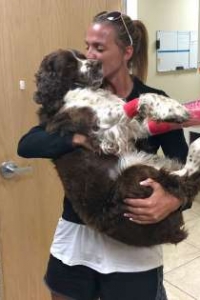 Hiker Fights Snow, Rain and Rough Terrain to Carry Injured Lost Dog Down Mountain to Safety – This is amazing. While hiking in the Grand Tetons, Tia Vargas saw a limping dog on the trail. Then she lifted the 55 pound dog onto her shoulders and started down the mountain. For six miles.

And then, it started to rain.

“It got to the point where my neck and legs were in so much pain and I was so scratched up and tired, I didn’t think I could go on carrying Boomer,” Vargas tells PEOPLE. “I was in tears, thinking that I’d have to leave that dog behind. And I didn’t want him to die.”

After saying a silent prayer, “I suddenly felt like somebody had walked up behind me and lifted Boomer off my shoulders,” she says, “and I realized that I had to buck up and do this. If I didn’t get him off the mountain, I knew that he would die.”

So Vargas bucked up and Boomer ended up getting a new home. 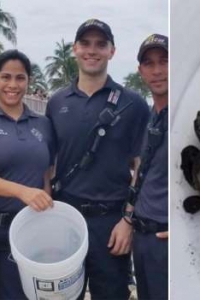 Save the Turtles! – Firefighters in Florida did their bit to help endangered sea turtles who need a bit of directional assistance.

Some hatchling sea turtles that got turned around on their way to the ocean got a second chance this weekend thanks to a group of Florida firefighters.

The Broward County Sheriff’s Office tweeted on Saturday about “3 wayward baby sea turtles which fell into a storm drain.”

“The turtles were swiftly returned to their natural habitat-the ocean. We wish them well…” the office wrote.

Just about every species of sea turtle is either vulnerable or threatened, but conservationists are doing what they can to help the animals make a comeback. 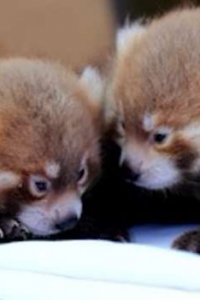 Rare Twin Red Panda Cubs Born at NY Zoo – OMG, I want one! Seriously I would sneak one of these into my pocket. Or my purse. One would definitely fit into my purse.

Officials at an upstate New York zoo have announced the birth of twin red pandas, an endangered species found in Asia. The male cubs were born at the Rosamond Gifford Zoo on June 21. 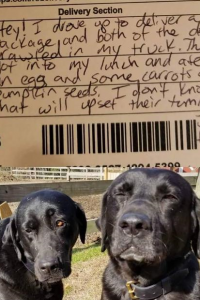 In June, Carol Jordan, who owns a five-acre farm in Isle of Wight, Virginia, stopped at her mailbox and discovered a handwritten note there from the woman who delivers her family’s mail.

“Our immediate thought was, ‘What did the boys do now?'” she told CBS News.

“The boys” in question are Bear and Bull, Jordan’s 6-year-old black Labrador/mastiffs, which she and her husband rescued from a high kill shelter in North Carolina as puppies. Bear and Bull are brothers from the same litter, though Jordan notes that Bull — the smaller one with the white spot on his chest — is the ringleader when it comes to getting into trouble.

Thankfully Bear and Bull didn’t seem to suffer any ill effects from their healthy lunch.