Let’s face it. 2020 has sucked. Or as I saw on a sign one of my neighbors had put up in their front yard, “OMG, will 2020 never end?” But here is something that made me smile after I finished reading it.

“A Canadian man drives stranded American family 1000 miles.” – Military wife Lynn Marchessault was trying to get her family of two children, two dogs, and a cat from their home in GA to where her husband had been stationed in Alaska. After waiting for the paperwork needed for them to traverse Canada, buying a truck that can take winters in the area, and hiring a U-Haul, off they set. Things went well for 3000 miles (a miracle anyway given two children, two dogs, and a cat). The border was crossed, the drive continued and then, with the clock on a five day deadline to exit to Alaska ticking, things started going to hell in a snowy handcart.

Blizzard conditions, the wrong tires, and no wiper fluid to clear the windshield lead to Marchessault white-knuckling it until she just couldn’t anymore.

Frozen windshields and a shredded tire

That good Samaritan drove Marchessault to a tire store, where they were able to change them on the spot.

But Marchessault was done with driving.

“I told my husband: Border patrol can just come and get us where we are. That’s the only way we’re leaving Canada at this point.”

That’s when the nice people of Wonowon, British Columbia got involved, putting out a Facebook plea for someone to help drive the truck, the U-Haul, Marchessault, the two children, two dogs, and a cat the last 1,000 miles. Remember the clock is ticking.

Miraculously, Gary Bath, whose job it is to train people to survive the Arctic stepped in. After a meeting over the internet, all felt comfortable with the plan and Bath took the wheel delivering Lynn, the children, the dogs, the cat, the truck and the U-Haul to the border.

As the story says, “There’s nice, and then there’s Canadian-nice.” Thanks Canada! 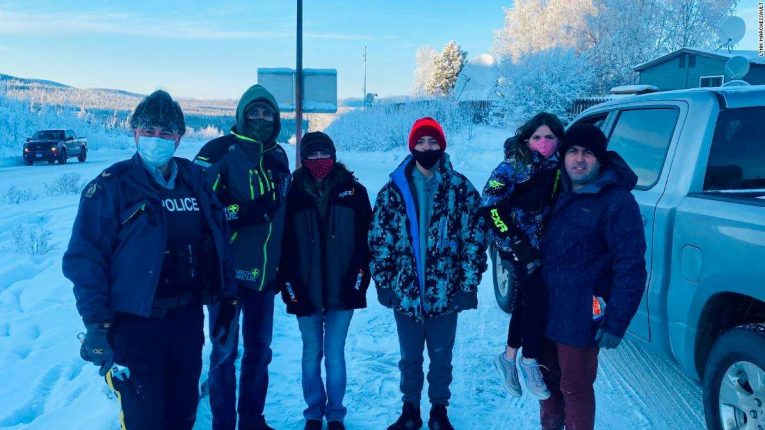 → Jayne
Previous article: REVIEW: The Beast and the Bethany by Jack Meggitt-Phillips
Next Post: Review: Spooky Business (The Spectral Files, #3) by S.E. Harmon