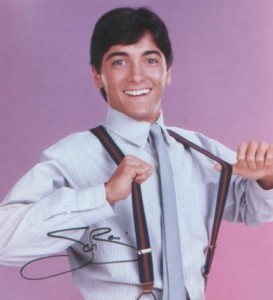 For those in their 30s and 40s, Scott Baio is best remembered for playing Chachie, a wannabe punk, nephew of The Fonz.   He was also Charles in Charge, a manny.   Today’s generation might best remember him for a three year stint on VH-1 as a reality star and now for his Twitter addiction run amok.

He started tweeting about how his wife calls President Obama a “shitfuck” and other pretty rude things.   Gwen Hayes, an aspiring romance author, decided to unfollow him.   Charles got upset and compared Obama to Michael Vick (not seeing the connection here) and then when Gwen tried to respond, Chachie engaged in what we shall now call the “chach block” which is the Twitter equivalent of sticking your fingers in your ears and saying “I can’t hear you”.

Things have escalated to the point where Charles in Charge has taken   his show about “being the grain” (yeah, I have no idea what that means) to the Glenn Beck radio show.

BAIO: I don’t know which is worse. But and somebody said on the Twitter, why am I going against the grain in terms of my beliefs. And I said, I thought I was the grain. I thought the things that I believed in were the things that this country stood for. And there’s very few things that I truly believe in and

GLENN: Hang on just a wait a minute. I’ve got to go back to that. Why would you go against the grain on what you believe in?

BAIO: No, no. They felt that what I believed was against the grain.

GLENN: Yeah, but what difference does the grain make if you believe in something?

BAIO: Well, I don’t know. And my argument was I thought I was the grain.

I don’t suggest reading the transcript unless you are drunk or high because sober, it makes no sense.

Let me sum up this wtf-ery for you. Charles in Charge is upset that some random person on Twitter unfollowed him and then a few other random people on Twitter told him his actions were stupid.   Chachie/Charles claims that his life is great and that he is very very rich and that others are pathetic for wanting to engage with him and then threatens that he will sue people like Hayes for … unfollowing him?

I think Charles needs to wind down. Play some golf. Read a romance.   Here’s your teachable moment: If you are ever compared to acting like Charles in Charge, it’s time to take a break from the keyboard. Don’t be a chachbag.