Firefighters are awesome – A teenager gets support from her late father’s firefighters when they give her a prom surprise. No cats are saved here though I’m sure they totally would if a cat were in danger.

John Pouletsos served the Terryville Fire Department for 50 years. The man, known for his infectious smile, was a chief, commissioner and, perhaps his most important role, father to 18-year-old Cara.

He died of a heart attack in March at 67 years old, a few months shy of his daughter’s senior prom.

“We felt we should be there for John, to be there for her. And that was the first thing we said. He wasn’t there to take the picture with her going to her senior prom, so we would,” said Terryville Fire Department Chief Thomas Young. 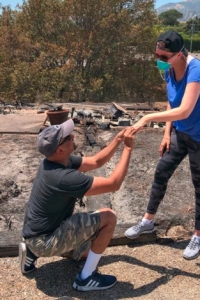 Wedding ring survives a fire – No I swear I’m not fixated on firefighters lately. Those of you in California dealing with the recent fires need a “pick me up” and here it is. A couple goes back to their destroyed home to look for her wedding rings and finds them! Which prompts a second proposal. And yes, they, their daughters, the dogs and cat all got out safely.

According to a tweet, the Santa Barbara County Fire Department let the couple return to their home to search for Laura’s wedding ring.

After the couple was able to locate the Tiffany ring, Ishu dropped to a knee and asked her to marry him again.

An “aaawwww” double proposal – What’s better than one proposal? Why two of course.

The Memphis Zoo is a special place for Becky McCabe and Jessa Gillaspie, because they’d gone their on their first date. When they went there with friends on Friday, McCabe had arranged for one of their pals to videotape the proposal.

“I had no idea she planned to propose, and she had no idea I planned to propose to her! We were both so surprised!!!! We were surrounded by our friends and had the most amazing night. I am the luckiest girl in the world to be able to call her my fiancée,” the caption to the video, which as been viewed nearly 200,000 times, reads.