I recently discovered an astonishing online resource: Open Library, which is part of The Internet Archive. Open Library is “an open, editable library catalog, building towards a web page for every book ever published,” which is cool enough in itself — as a sad GoodReads librarian on strike, I’ve enjoyed working on their database — but it also offers access to scanned ebooks, in partnership with thousands of libraries around the world. Some are “talking books” for readers with limited vision, some are only available to read online, and some can be downloaded in either scanned PDF or epub format — via Adobe Digital Editions — for a two week loan period. The book pages are also connected to WorldCat, and show you the closest libraries that own physical copies.

I couldn’t have found this at a better time. I’ve been burnt out on reviewing, and unable to focus on any book written after about 1995.  A bountiful library of older romances, including many on my wish list of classic “fabulous wallbangers,” was just what I needed. I literally read 61 books in 30 days, not counting several rereads I skimmed for the good parts; the scans have some errors, but they do the job. These are a few of the books I was especially happy to find. 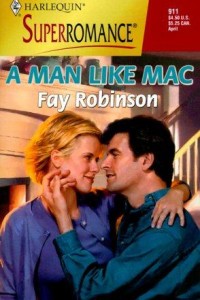 A Man Like Mac by Fay Robinson. I’ve wanted to read this Rita winner since Ridley wrote about it, but it hasn’t been digitized. I don’t have much to add to her comments, other than that I really appreciated such an honest look at disability and romance, including its far-from-glamorous aspects. There are no magic fixes here (though the end does get a bit into wish fulfillment.) Although it has its fair share of angst — thankfully, not all revolving around disability — it also made me laugh out loud several times. 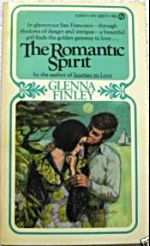 The Romantic Spirit by Glenna Finley. My very first genre romance from my adolescence! I hadn’t wanted to actually give it house room, which is why I never got it from Paperback Swap, but I couldn’t resist the no-strings chance to reread it. Its dated qualities are positively charming, with its depiction of phony New Agers in the 70s, and its prim heroine who is utterly aghast that the hero thinks she’s “that kind of girl.” I was intrigued by what stuck in my memory and what didn’t; my taste for angst clearly goes way back.

My first historical romance was Bewitched by Barbara Cartland and I’m working up to rereading that. I suspect it won’t go over as well as this one did. 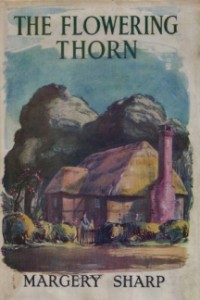 The Flowering Thorn by Margery Sharp. This isn’t a romance, but it’s one of the few Sharp books I was never able to find at a library. Best known now for her “Miss Bianca” series of children’s books (the basis for the movie “The Rescuers,”) Sharp also wrote clever and funny adult novels. This story from the 1930s is about a bored socialite who adopts an orphaned child, basically on a whim. (He’s the son of a deceased servant, and it’s an unofficial adoption.) She’s shocked to discover that her entire life then has to change.

The most fascinating aspect of this story is that the adoption isn’t based on love or sentiment, though Lesley does grow to be very fond of Patrick. She takes care of his needs and basically lets him be, while she discovers the joys of a settled life and genuinely intimate relationships with other adults. Children needing freedom from adults is something of a theme in Sharp’s books, and people who follow the “free-range kids” philosophy might also be interested in The Eye of Love, which is about a dedicated child artist. (As well as a very offbeat love story.) The theme is taken to a powerful extreme in The Innocents, in which a severely developmentally delayed child is threatened by her biological mother’s refusal to acknowledge her needs and let her be.

If you would like to try some romantic Sharp, Open Library carries The Nutmeg Tree, Cluny Brown, and Something Light, all very funny books with happy endings (although the routes to them are unusual.) 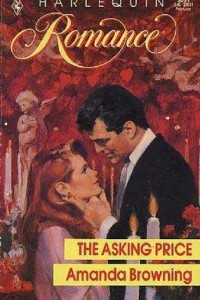 The Asking Price by Amanda Browning. A very, very old skool Harlequin requiring a strong stomach: the best I can say for it is that there’s no actual rape and no miscarriages. Also, it’s awesome. Well, partially. The cruelty and controlling nature of the vengeful hero came a little too close to reality for me, especially when he pressures the heroine to reconcile with her very cruel and controlling father; the disturbing parallels are hard to miss. And the ending is not only one of those that punishes the heroine more than the hero, but lacks sufficient redemption or payoff. Still, there is a big, juicy betrayal, and there is almost nothing I love more in my romance than a big, juicy betrayal.

I haven’t been able to find any limitations on Open Library membership; as far as I can tell — please comment if I’m wrong — it’s available to anyone with internet, and you can be pseudonymous. And of course there are books available in every conceivable subject, not just romance or general fiction. Check it out!