Recently, I reviewed Patricia Briggs’s latest entry in the Alpha and Omega series, Burn Bright. When it came up in the comments that although I’m an avid follower of Charles and Anna, I had only read the first of the Mercy books, readers persuaded me to read further on in that series. I decided to try and read all the Mercyverse books and stories in publication order with my husband.

That meant starting in the beginning, with Moon Called. I had already read and reviewed this book, back in February 2007, but in the eleven intervening years, I had largely forgotten what the story was about. 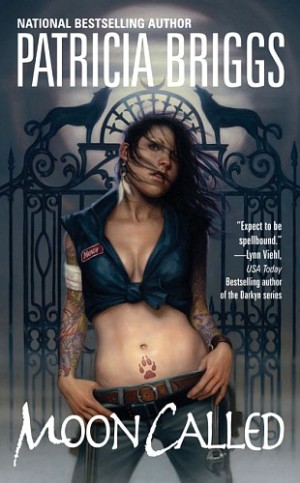 Here we encounter Mercy, coyote shape shifter / mechanic from the Washington State Tri-Cities area, her garage, and her friends. The latter include her neighbor and local werewolf alpha, Adam, her customer and vampire, Stefan, and the fae ex-boss, Zee.

Early in the novel, Mercy is approached by a teen werewolf, Mac, who is pursued by some shady characters. Mercy introduces Mac to Adam, who can help him control his wolf, but something goes very wrong at Adam’s house that night, and the next morning Mercy finds Mac dead, Adam injured, and Adam’s teen daughter, Jesse, missing, having been abducted.

Mercy takes the injured Adam to the small Montana town where she was brought up and where Bran, alpha of all of North America’s werewolves, lives. Also there is Bran’s older son, Samuel, with whom a young Mercy once had a romance which ended when Mercy discovered that Samuel mostly wanted her for her childbearing capacities.

Now Bran reveals that Samuel’s wolf considers Mercy his mate. But not only is Mercy ambivalent about Samuel, there is an additional wrinkle: Adam told his pack Mercy is his mate. Did he only say that to protect Mercy, or does his motive go deeper?

Adam heals and heads back to the tri-cities with Mercy and Samuel both tagging along. The three must join forces to identify who in Adam’s pack can be trusted, what the kidnappers’ motives are, and how Jesse can be rescued from them.

In 2007, I gave Moon Called a B+, but this time I appreciated it less. I’m sure it must have seemed really fresh and different eleven years ago, and Briggs’s worldbuilding is quite good. This time, though, the story seemed a little simple, the danger a little easy to overcome, and the solution to the mystery a bit too convenient. My favorite part of the story involved a conflict in side character Warren’s relationship with his boyfriend, Kyle. While I liked the book okay this time around, it’s probably not one I will reread again, and thus it gets a C+.

The second book in the series was a big improvement over the first. In this one Mercy gets dragged into a confrontation with a demon-possessed vampire who proves very dangerous. So dangerous that her friends decide to take care of the vampire themselves, leaving Mercy safer, but frustrated by her inability to contribute to the battle. That doesn’t last too long, though, and eventually it is she who must rescue her friends. 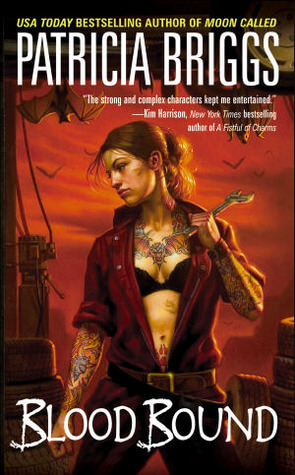 In addition to battling the demon-possessed vampire, Mercy must also fend off or at least try to choose between her admirers—Adam, Samuel, and it becomes evident that Stefan has a thing for her as well. Not only that, but while vampire queen Marsilia is willing to use Mercy to defeat the demon, she doesn’t like Mercy or what she is, and may pose a threat to her in the future.

The first half was a bit slow but I liked the later developments in this novel a lot, especially Mercy’s discovery that she could make use of some abilities she hadn’t thought much of in the past. Her relationship with Adam proceeded in an interesting way, but I was less keen on Samuel. The addition of Stefan to the list of Mercy’s beaus at first seemed like overkill, but later went in a direction that made me view it differently and appreciate its future plot potential.

A conversation between Samuel and Mercy about a past relationship in which Samuel’s human girlfriend had an abortion was seriously annoying. Although Samuel’s ex didn’t know it at the time, it’s clear from other human-werewolf pregnancies in the series that chances were high that she would have miscarried anyway, and a pregnancy might have risked her own well-being, too. So it bothered me that this abortion was treated like a tragedy.

Other than that, though, I really liked Blood Bound, which felt much more fraught with danger than Moon Called. A great scene that took place in Mercy’s trailer late in the book was very exciting, as was the way the demon was dispatched. The denouement also held some additional thrills and an effectively creepy reveal, too. B.

Alpha and Omega by Patricia Briggs

We then moved on to the novella Alpha and Omega, which is the first of the Charles and Anna installments. This novella can be found in the anthologies On the Prowl and Shifting Shadows, as well as on its own digitally (with a terrible cover). I own it in two formats — it has been on my keeper shelf for years and I had read it about ten or eleven times, including, most recently, in early February of this year. Reading it again a month and half later would not have been my choice if it weren’t for my husband’s not having read it before. But I still enjoyed it a lot even so, which is impressive. 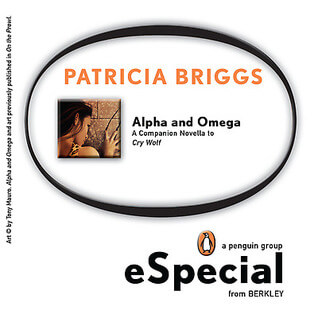 The story begins when Anna, an abused werewolf / rape survivor who mistakenly believes herself to be submissive when she is in fact something far more rare, gathers the courage to call Bran and report criminal activities in her pack. Anna has known nothing but abuse from dominant wolves, so when Bran dispatches Charles, his son and the second most dominant wolf on the continent, to come to Anna’s aid, she has a hard time overcoming her fear. This in turns angers Charles because his wolf has instantly decided that she is his mate, and he doesn’t like that she has been abused.

If you haven’t read this novella you might be groaning over what sounds like instalove. But it isn’t that—while their wolves have a connection and feel safe with each other, Charles and Anna’s human halves really struggle with this, and with their need to control their impulses around each other, both to work together in order to figure out how and why things went so wrong in Anna’s pack, and to forge a relationship.

There is something deceptively simple about this story—in a way, it’s like a marriage of convenience historical, except that it has an urban fantasy setting—and yet it is so satisfying to see Charles and Anna wrestle with their feelings and come to each other’s aid. That I still appreciated this even on my eleventh or twelfth reading means it is, to me, an A.

Mercy’s friend Zee asks her to assist the fae in an investigation by sniffing some murder scenes on the fae reservation. Trouble is, the fae have not reported the killings to the human authorities, and when Mercy identifies the killer, he himself is murdered and Zee is arrested in connection with his murder. Now Mercy must not only arrange a defense for Zee, but catch the real killer, all while dodging a water-dwelling fae she has managed to offend. 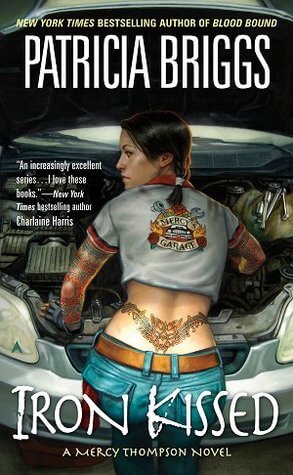 In the course of her investigation, Mercy infiltrates a local anti-fae group to which the first killer belonged. Not only is the aforementioned water fae a member of the group (spying on their activities) but so is Tim, a deeply insecure man who Mercy met earlier, at a music festival she accompanied Samuel to. One might be forgiven for initially considering Tim less dangerous than the fae—but that would be a mistake. This is where things go really, really wrong for Mercy.

Tim uses fae artifacts he stole to drug Mercy and rape her. The rape is horrific and it’s impossible not to empathize with Mercy or later, to refrain from rooting for her when she shuffles Tim off this mortal coil. The aftermath, when Adam tries to reach out to Mercy and she can’t accept it because she blames herself, is heartbreaking. Ben, a werewolf Mercy has never liked, redeems himself somewhat here. On the one hand, I found this scene very moving, but on the other, it bothered me that the focus shifted a bit to include Ben’s trauma, at a moment when Mercy was the one suffering the most.

The love triangle is also resolved in the novel, although in an anti-climactic way. Still, I liked its outcome, as well as the resolution to a subplot about an attack on Jesse. B/B+.