Last month was a busy month for me and therefore I didn’t read as much as I usually do. Here’s what was on my plate in August, reading-wise: 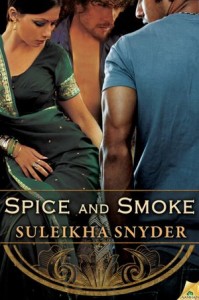 Spice and Smoke by Suleikha Snyder

Set in the world of Bollywood cinema, Spice and Smoke is comprised of two connected novellas. “Bombay Dreams” is the story of a quadrangle/foursome, in which one of the relationships, Avi and Michael’s, is m/m, the other, Harsh and Trishna’s, m/f, and yet Avi is married to Trishna. Got that? If it sounds complicated that’s because it is, but it’s an interesting set up. The foursome are filming a historical epic together when this tangle comes about.

The second novella, “Monsoon Bedding,” takes place on the same movie set and deals with another couple (m/m). Sam and Vikram were lovers long ago but then split up due to Sam’s addiction. Now out of rehab, Sam is trying to stay sober, he and Vikram both fear a second chance to hurt each other.

Snyder has a strong writing style and the stories were full of potential. Both novellas felt too short and quickly paced to me. I would have loved to see this developed into a novel with more quiet relationship-building moments. Also, Avi, Trishna and Sam fascinated me more than their counterparts .

This was the first contemporary I’ve read that is set in India, and I enjoyed the setting and the filmmaking milieu. Sunita and I reviewed Spice and Smoke together. Sunita’s grade was a C+/B- while mine was a C/C+. 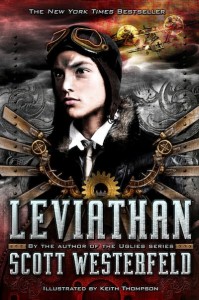 It’s World War I and Europe is divided by faction into two sections, Clankers (those who use machine technologies) and Darwinists (those who rely on genetic engineering). That’s the premise of Scott Westerfeld’s YA steampunk novel, Leviathan.

The story begins with Alek, in this novel the son of Austria-Hungary’s assassinated archduke, Franz Ferdinand. One night, Alek is spirited away by his fencing master and his father’s master of mechanics. As they travel in the huge machine known as the Stormwalker toward neutral Switzerland in order to protect Alek’s life, they encounter dangers and Alek changes from a sheltered boy to a kind of young soldier.

Meanwhile, a second story thread follows Deryn Sharp, who joins Britain’s air force in order to fly in one of its living zeppelin-like “beasties.” Deryn is a girl who must pass for a boy in order to achieve her aim. When Deryn’s ship is diverted to pick up a mysterious female passenger and an even more mysterious box, Deryn worries that her identity will be uncovered.

Leviathan is plot driven and takes a while to get to the character development. For that reason I wasn’t immediately engaged, especially in Alek’s storyline which isn’t as compelling as Deryn’s. Once the two meet up, though, the book becomes an exciting feel-good adventure story. C+. Review to come.

Where We Belong by Emily Giffin

Frankly, I don’t even know what to say about this book. I read it in early August, a couple of weeks before what I think of as the Giffin debacle of 2012.

My review speaks for itself, and conveys how much I enjoyed the book. But while I think there is something to be said for evaluating the art separately from the artist, sometimes, as in this case, that is easier said than done.

Giffin’s behavior was hugely disappointing and disturbing to me as a past fan of her books, and I honestly don’t know if I’ll ever be able to pick up one of her novels again. Which is a loss, because before this happened, a couple of them were books I had kept.

When I heard that the Israel Chamber Orchestra had made the controversial decision to perform the music of Wagner, an anti-Semite and a favorite composer of Hitler’s, in Germany, I had decidedly mixed feelings. On the one hand, I was awed because they were bigger people/artists than I, in their ability to honor an artwork whose purpose and creator they reviled. On the other hand, I also felt the orchestra players had, in some fashion, both disregarded and taken something away from my righteous anger at Wagner’s anti-Semitism.

Giffin isn’t Wagner, nor are her works equivalent to his, but there’s a parallel here because, since her behavior led to death threats against a reader (news of which she responded to in a callous manner), readers and reviewers everywhere are entitled to righteous anger over her actions.

So when it came time to do a “What Janine is Reading in August” column, I was torn about how to deal with Where We Belong. Should I act as though I hadn’t read it, and not give Giffin more publicity than I already had? Or should I, like the orchestra players, honor the art over the artist? Personally, I feel I cannot take either position. Instead I have decided to link to my review in this post, and leave it at that.

I would, however, love to hear from readers on this topic and/or about the other books mentioned in this post.

→ Janine
Previous article: REVIEW: Champagne Kisses by Zuri Day
Next Post: Daily Deals: A YA that is deemed the devil’s work; a sexy PI; and drunk knitters