Playing by the Greek’s Rules by Sarah Morgan 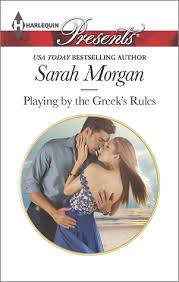 Yay, Sarah Morgan has a new Presents out! I picked this up when it appeared at Kobo at the beginning of the month and read it in one sitting. This book is billed as a prequel to Morgan’s new single-title Puffin Island series, but it stands completely on its own.

I had forgotten how much sheer fun Morgan’s HPs are. This one features one of her patented Ordinary Heroine characters, and I mean that in the best possible way. Lily Rose is an orphan, but she’s got a post-graduate degree, pursues her art interest in her spare time, and makes ends meet by assisting on an archaeological dig (she has an MA in archaeology) and moonlighting as a cleaner to pay off her college loans. Oh, and she’s an intern on top of that.

She meets our hero, Nik Zervakis, when she’s cleaning his palatial beach pad while working on a dig on Crete. Of course sparks fly, of course he’s intrigued by her refreshing and cheerful personality. Nik has sworn off romantic love and Lily is trying to after her latest Mr. Oh-So-Wrong.

It sounds textbook, doesn’t it? But Morgan plays around with the formula in such enjoyable ways. Lily really is a very good ceramicist and knows a lot about Minoan pottery. Her best friend, Brittany (who is the heroine of the second Puffin Island novel), has her own secrets but in this book is mostly present as a skilled archaeologist and friend, and they have a third friend (not seen on-page and also featured in the Puffin Island series) who is a talented jewelry designer. No one here needs to be rescued.

And while Nik is a billionaire whose childhood trauma has made him swear off romantic love forever (of course it has, this is an HP, people), he’s not broken or horribly embittered, just kind of cynical. The rich people have giant houses and helicopters and own islands, but we aren’t hit over the head with it, and that’s just the backdrop to their everyday issues, which are the kind we all have. Nik’s father turns out to be more than the one-dimensional person Nik presents him as at the beginning, and the way his story unfolds takes a couple of surprising turns. Except for one villainous ex-wife/stepmother (who remains mercifully off-page), everyone is nuanced and interesting.

This is a terrific read that can serve as a great introduction to Presents for people who don’t always like the over the top, angsty nature of Presents. And it should work for the usual Presents readers too. Recommended. Grade: B+/A-

Servant of the Underworld by Aliette de Bodard 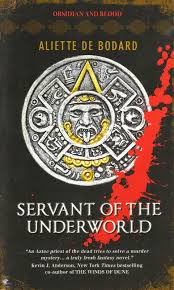 I picked this up because I loved de Bodard’s On A Red Station, Drifting, so much. I understood that it was historical urban fantasy and set in Aztec Mexico, which are two things I don’t usually read, but I figured that since the story was structured around a mystery I would have something to hang on to. And I did. The world-building is very well done. The reader is dropped into the world immediately, but not in a wholly disorienting way, and you learn about the mythology and the setting at about the same time as you get to know the various characters and see the mystery unfold. It is paced well, with each section of the book developing some aspect of the characters’ development or the plot.

I know next to nothing about Aztec history and culture, so most of the person and place names were unfamiliar to me, and it took a while for me to get comfortable. I looked up some of the pronunciations on a Wiki cheat sheet for Nahuatl and I’m still not sure I got them right, but I repeated them to myself as I read and by halfway through the book they were flowing into the rest of the text. De Bodard helps the reader by giving many of the main characters fairly short names.

The narrator, Acatl, is an interesting and appealing character, and the reader learns along with him. He’s not a superman or a perfect person, and I related perhaps a little too much to his reluctance to accept the privilege and power that was thrust upon him (he thinks he would have preferred to remain an obscure country priest but he’s been appointed to a major clerical position). The mystery itself involves Acatl’s family, from whom he is estranged, and it requires him to reconnect with them and also interact with powerful people (which he always tried to avoid because he hates politics). Along the way he picks up an intriguing sidekick who is not altogether what he seems, and he spends a lot of time negotiating the divide between the human world and the worlds of the various gods.

This book is not for readers who can’t stand any violence toward animals or on-page spilling of blood, because blood and animal sacrifices are commonplace in this magic system and in priestly rituals. They’re not sensationalized at all, they’re very matter-of-fact, but they are explicit, however briefly they occur.

The writing is good. De Bodard’s style has a deliberateness and straightforwardness that gives weight to the characters and events, which feels appropriate considering what the storyline is. There’s little flash in her writing but it kept me turning the pages. I did take a little while to get into the rhythm because of the unfamiliarity, but it paid off for me and after the first third I found it hard to put down.

Given how little urban fantasy I read (I’m not even sure that’s what this is) and my ignorance of the setting and mythos from which the book is drawn, I can’t evaluate its authenticity. It felt authentic and respectful to me; there’s not a whiff of the “exotic” about it (which makes sense because de Bodard is very sensitive to those traps) and it lines up with the little I do know about the period and people. As a reading experience for me, it was terrific.

This is the first book in a trilogy and I’m definitely going on to the second. Recommended. Grade: A- 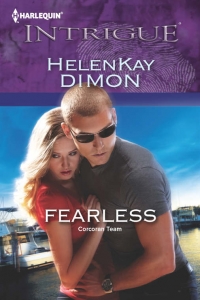 This is the first book in Dimon’s Corcoran Team series for Harlequin Intrigue and I read it last year some time. I enjoyed it, but when I started the second book I wound up putting it aside after a couple of chapters (I think this was during my romance reading slump). The TBR challenge category for next month is “series catch-up” and I decided to reread Fearless before I went on to the next installment as my March selection (I’m not counting rereads for either challenge).

I liked Fearless all over again. It suffers a bit from series set-up issues, but Dimon is good at giving you backstory without infodumping and at working with a large-ish cast of characters, all of whom will get their own books. It helps that the main couple in this book are estranged lovers, brought back together after Lara Bart, our heroine, is a bystander in a murder-for-hire scenario (in a crackerjack opening sequence) and is thrust into danger as a result. She goes straight to Davis Weeks, her ex-fiancé who is now a member of the private, undercover Corcoran Team. As they fight to keep Laura from being killed, we meet the rest of the team, and as the story unfolds we spend a little time in the POV of the hired gun who is hunting her, as well as a couple of the other bad guys, and Davis of course. Until I was writing this up I didn’t think about how many characters’ POVs we read, because Dimon juggles them well in a tight word count. There’s a little more mental lusting and lingering over perfect physical attributes than I like, but that comes with the territory in Romantic Suspense, and by the standards of the subgenre (and Intrigues) it’s pretty understated.

I liked the supporting characters and Dimon sets them up well for their own books. We learn just enough to make them interesting but not so much that they take over this book. Fearless reinforces why Dimon is an autobuy author for me, and I’m glad I’m over my slump and can enjoy category romances again. In the hands of a skilled writer they’re one of my favorite romance reads. Recommended. Grade: B+

The Power of Habit by Charles Duhigg 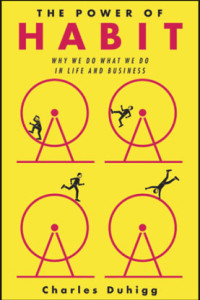 I was intrigued by this book when Jane reviewed it a while ago, even though I’m generally very leery of social-science-based popular nonfiction. But it kept nagging at me, so I bought the audiobook and started listening to it as part of my 2015 efforts to improve my productivity habits.

I really liked the first third of the book, where Duhigg talks about the psychology and neurology of habits. He collapse a few different behaviors into “cravings,” but the habit loop idea is interesting and the case studies are great. I found the connections he draws between cue, routine, and reward and the ways we can think about altering those to be really helpful. Thinking about my habits through this lens has helped me identify certain patterns of behavior that I want to modify and I have a sense of how I might go about it. The book has also made me appreciate the value of routines more. It’s easier to see routines as something we all have rather than something only some people subscribe to, and I realize now that it’s not a matter of falling into a routine per se, but adopting a healthy or productive routine.

That’s the good news. Now for what really didn’t work for me in the book. When Duhigg moves from individual behavior and psychological studies to societal-level phenomena, the book falls apart and comes close to undermining the strengths of the earlier sections. The Alcoa/Paul O’Neill sections commit the fallacy of attributing complex outcomes to single causes, and the explanation of the success of the Montgomery Bus Boycott as the product of changed “social habits” is just flat-out wrong. Whereas before Duhigg was conflating things like associations with cravings, now he collapses subgroup monitoring, peer pressure, organizational strength, and even strategic elite choices into “habits.” Duhigg seems to understand that he’s stretching the concept beyond recognition or usefulness but he goes ahead and does it anyway. The endnotes are interesting because several of the researchers on whose work he draws are careful to apply their conclusions much more narrowly than he does. I understand that it’s a common problem in this type of book, but I think I was especially disappointed because the book was so compelling in the early parts.

The strengths of the first sections have stayed with me and I’m glad I read it. But I can’t give this an unambiguous recommendation because the interpretations and conclusions in the later parts run so contrary to what we know about the cases he’s using. My suggestion is, read the first half and learn from it, then read the second half as entertainment. Grade: B-/C+