Well, as usual it’s been a dog’s age since I’ve done one of these, and a lot of what I’ve read I’ve already reviewed: The Typewriter Girl by Alison Atlee, Unforgivable by Joanna Chambers, Daniel Deronda by George Eliot, When Maidens Mourn by C.S. Harris, Children of Liberty by Paullina Simons, That Scandalous Summer by Meredith Duran and The Gilded Lily by Deborah Swift. Here are a few things that I haven’t: 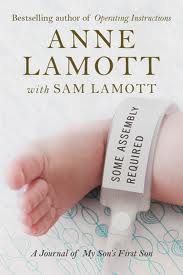 Some Assembly Required by Anne Lamott

Years ago Anne Lamott wrote Operating Instructions: A Journal of My Son’s First Year. Well, time flies, and Lamott’s son Sam becomes, unexpectedly, a 19-year-old dad. Reading Anne Lamott is an interesting experience for me; I think she’s painfully honest, meaning there are times when I can totally relate to her and times when she comes off as obnoxiously self-absorbed and judgmental (to be fair, she seems to be aware of this). The book suffers a bit for Sam Lamott’s “co-authoring”, which consists of Anne transcribing phone interviews with him, except I think she cleans them up so much that his voice comes off as stilted and unconvincing (particularly given his age). This is worth reading if you like Lamott (and I mostly do), but probably should be skipped if you’ve found yourself bugged by her in the past (I think Janine has), because she really does come off like an ass sometimes. 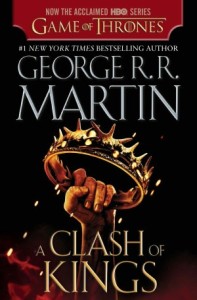 A Clash of Kings by George RR Martin

I liked this second book in the Game of Thrones series more than the first, which I didn’t really expect. The first book was a bit of a slog; I attributed that in part to knowing what was going to happen, since I’d already seen season one of the HBO series. But somehow, even though A Clash of Kings covers the same material (with a few minor changes) as season two of the series, the book was a lot more compelling to me than the first one was. Maybe I was just more invested in the characters at that point (when I read book one I was invested in the show characters, but it didn’t necessarily translate to the book characters, even when they were the same character, if that makes any sense). I finished this very enthusiastic about reading the rest of the series. 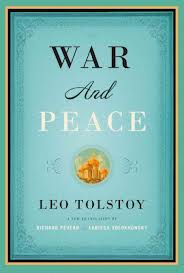 War and Peace by Leo Tolstoy

My new year’s resolution, such as it was, was to tackle this book. I’m just about three-fourths of the way through it now, and it’s kind of a mixed bag for me. I have been joking that I like the peace parts but not the war parts, but it’s not as simple as that. There are stretches, yes, that deal with war that by and large bore me. There are also stretches of philosophical musing  (which sometimes but d0 not always intersect with the war parts), and those definitely bore me. Then there are the romantic and personal interaction parts; those are the only parts that actually interest me. Pierre is more or less bamboozled into marrying Helene (being nobility everyone speaks French and a lot of them go by the French forms of their names in the book), and is predictably unhappy. Prince Andrew loses his wife in childbirth but eventually finds love with Natasha Rostova, a love that goes south due to her youth and his neglect. Princess Mary is plain and dutiful and for her trouble gets horribly verbally abused at every turn by her vindictive father. These were the stories I cared about, but I’m not sure what that says about me. I feel kind of like the important, big novel themes and ideas go over my head and instead I’m captured by the soap opera parts. Which I’m okay with, mostly, but I wish I got more from the really brilliant parts of the book, as I know other readers have. 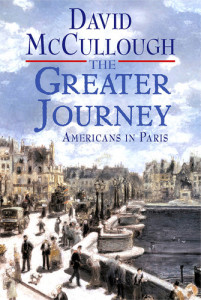 The Greater Journey by David McCullough

I love David McCullough, both as a writer (John Adams is the shit) and for his soothing voice-over narration on such iconic documentary projects as Ken Burns’ The Civil War and PBS’s American Experience series. Seriously, he could read the phone book to me and I’d listen. His latest book details the experiences of Americans in Paris throughout the 19th century, focusing on writers, artists, doctors and diplomats. It’s not a juicy read, but it’s quietly entertaining and informative about some well-known (and some not-so-well-known) 19th century Americans, while addressing the timeless pull of Paris on the American psyche. 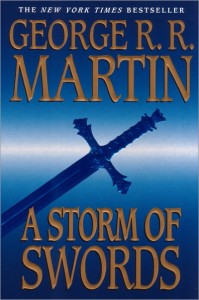 A Storm of Swords by George RR Martin

This was the best book in the series for me so far; I get the feeling that it’s a favorite with those who’ve read the whole series, as well. It helped, certainly, that it’s the first book in the series where “new to me” stuff happens, since book one and book two have already played out on television. But it’s also just the most thrilling in terms of action and big (and unexpected) moves being made. Which is to say, several people that I wasn’t expecting to see killed were killed. While this makes me nervous for some of the characters I love, I have to say that it raises the stakes in an interesting way. 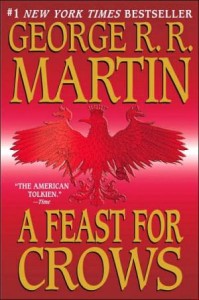 A Feast for Crows by George RR Martin

Reading this now. I was unaware (since I try to avoid spoilers) that this book takes place concurrently with the fifth GoT book and doesn’t feature all of the usual characters. The first couple of chapters were from the perspectives of new or minor characters and that was disappointing, as I had high expectations after the excitement of A Storm of Swords. I’ll persevere and hope it gets more compelling. 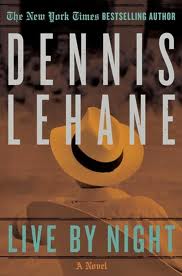 Live by Night by Dennis Lehane

I read, and loved, Lehane’s earlier book The Given Day, set in Boston around 1918. Live by Night starts in 1926 and features the younger brother of the protagonist from the earlier book.

Joe Coughlin is 20 years old and a minor criminal; he’s always been drawn to the dark life, in spite of (or because of) the fact that his father is a Boston police sergeant. The book opens with Joe and two accomplices robbing a poker game that unexpectedly includes some fairly well-connected mobsters. There he meets Emma Gould, who becomes an obsession for him and leads him on a dangerous path.

Live by Night is an intense and riveting book featuring  gangsters, KKK members and Cuban nationalists, as well as other colorful characters. At times the intensity and violence were a bit much for me, but I was never less than totally involved in the story. Joe is a compelling protagonist; in spite of his irresistible attraction to the dark side, he has a  core of decency and fundamental lack of ruthlessness that many of the other characters note and remark on; even among Joe’s friends and partners there’s always the concern that he’s somehow too “soft” for the life he’s chosen. The ending was a bit more downbeat that I would’ve liked, but I knew going in that this was not a romance with a guaranteed HEA, so I can’t complain too much. 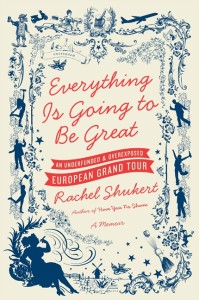 Everything is Going to be Great by Rachel Shukert

This was an impulse buy that I happened to see listed in DA’s Daily Deals; I’m glad I took a chance on it. The memoir is subtitled “An Underfunded and Overexposed European Grand Tour”, but that’s a little misleading; it mostly takes place in Amsterdam, where Shukert, an actress by training, lands after taking part in a play touring Europe (unfortunately for her, in a non-paying and non-speaking role). Shukert stays with friends, a Dutch couple who believe they can get a government grant to put on a play that Shukert will have a part in. While waiting for the seemingly endless paperwork to wend its way through Dutch government channels, Shukert takes a crappy job promoting an American-style comedy club and gets involved with a fellow American who has a live-in girlfriend and turns out to be a raging asshole (the two facts, not surprisingly, are related).

I have to steal a bit from a reviewer at Goodreads, who rather accurately compares Everything is Going to be Great to Eat, Pray, Love if it had been written by David Sedaris. Or maybe the Sedaris comparison only feels apt to me because Shukert details the Christmas traditions of the Dutch featured in my favorite Sedaris story, Six to Eight Black Men.

Readers who prefer their heroines to be more sympathetic (i.e. less inclined to excessive drinking, drug taking and sleeping with other women’s boyfriends) probably won’t find Shukert as amusing or as lovable as I did. But if you like memoirs featuring funny, flawed women, this is the book for you. I’ll be seeking out Shukert’s other books.

→ Jennie
Previous article: Is there an answer to Scott Turow’s lament
Next Post: Monday News: More self publishing news, some real numbers, and some thoughts for the future