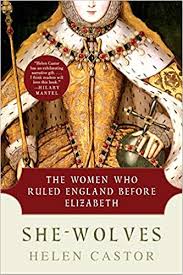 She-Wolves: The Women Who Ruled England Before Elizabeth by Helen Castor

This book was a bit dense for flighty me, but it was also a very absorbing and informative history of the four women who attempted to sort-of-kind-of rule England before Elizabeth I. Those women were the Empress Matilda, who fought her cousin Stephen for the crown; Eleanor of Aquitaine, who fought her own husband, Henry II; Isabella of France, who plotted against *her* husband, the feckless Edward II; and Margaret of Anjou, who was the power behind the timid and mentally unstable Henry VI. I qualify “rule” because of the very real limits on the authority of these women due to their gender. They faced a quandry that female politicians still face today: appear too strong, and offend by not being womanly enough, or appear womanly, and get dinged for not being strong enough to lead. I sometimes had trouble keeping everyone straight throughout the book (Wikipedia got quite a workout), and it didn’t help that most of these women were at least tangentially related, for all that they lived decades or centuries apart. I did feel I learned a lot, and enjoyed it, so I’m giving this book an A-.

When I Was You by Minka Kent

This one started slow but got pretty suspenseful after the first third or so. Brienne Dougray is recovering from a stranger’s attack. She has become somewhat agoraphobic and obsessive (rather understandably given her trauama, she checks and rechecks her locks). Brienne rarely leaves her Midwestern home. She relies on her tenant, Dr. Niall Emberlin, for companionship, since most of her friends drifted away after the attack. Brienne also suffers from debilitating headaches and memory lost as a result of her injuries. One day she gets a package in the mail indicating that she has rented an upscale apartment in another part of town. Investigating, she finds that someone with her unusual name seems to have settled in to living a life remarkably like her own (for instance, her doppleganger looks like her, dresses like her and drives the same car). There are two twists, and I sort of saw one coming but not the other. I give the story credit for absorbing me and keeping me guessing. The writing was smooth but the characterization was pretty nonexistent, and Brienne’s choices are often not credible. I gave When I Was You a B-.

I bought this on the strength of Janine’s positive review and I’m SO glad I did, because I simply loved this book. I loved Leon, loved Tiffy, loved her friends and his brother and the various secondary storylines. It was so clever, funny and sweet. I am eagerly awaiting the author’s next book. I gave this a straight A.

Other Powers: The Age of Suffrage, Spiritualism and the Scandalous Victoria Woodhull by Barbara Goldsmith

I came across this book recently and snapped it up. The subject matter is fascinating to me – the post-Civil War boom in spiritualism, suffragettes and free love – all centered around Victoria Woodhull. Woodhull had a long and storied career in the public eye. Among other accomplishments, she’s generally considered to be the first woman to run for president in the United States. This book features a huge cast of characters and devotes almost as much time to one of them – Henry Ward Beecher – as to Victoria. Specifically, it dealt with the events that lead to the “trial of the century” – the charges against Beecher for “criminal conversation” with his former protege’s wife. Beecher is one of many people in the book who come off as fairly awful on a personal level, even as they professed progressive attitudes and values as they related to emancipation and women’s rights. At times I felt that the book might’ve benefited from a narrower focus. Though almost all the strands the author followed were interesting to me, overall it felt unfocused. My grade was a B. 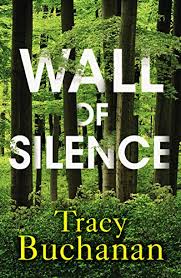 Wall of Silence by Tracy Buchanan

This was a fairly recent Amazon First Reads book. The blurb sets up the story, “One evening, Melissa arrives home to the unimaginable: her husband lies stabbed on the kitchen floor, their children standing calmly around him…With horror, she realises that one of them is to blame. But which one? And why would they attack their own father?” It’s sort of a domestic drama/mystery/thriller hybrid, told alternately from Melissa’s POV and that of the attacker (who is one of the children, but isn’t identified until the end). The story did keep me guessing – the actual stabber was the one I least suspected – and the story was smoothly told and compelling. The overwhelming villainy of certain characters and the main protagonist’s blindness to said villainy was difficult to credit at times. Melissa did have a hard upbringing, though, which went some way to explaining her desperation to hold onto her illusions about her perfect life. I gave this a low B and unlike many Amazon First Reads, I’m not sorry I read it. Mine Till Midnight by Lisa Kleypas

This is the first book in the Hathaways series, which I undertook after my recent modest success with Kleypas’ more recent Ravenels series. Janine did mini-reviews of all of the Hathaway books. Amelia Hathaway is the managing sort of heroine – to be fair, she has her hands full managing her four siblings: dissipated Leo, fragile Win, and the younger girls Poppy and Beatrix. She meets her match in Cam Rohan, half-Rom manager of an infamous London gaming club. I honestly don’t remember too much of the conflict even though I just read this a few weeks ago. There’s an ex-suitor of the heroine’s who comes sniffing back around, and I think Cam thinks he can’t promise Amelia anything for some reason or another. It was readable but not hugely memorable for me. I gave a B-.

Seduce Me at Sunrise by Lisa Kleypas

This is the second book in the Hathaways series and features the second oldest daughter, Winifred and the big brooding Rom, Merripen who grew up with Win’s family. It’s obviously Kleypas’ take on Wuthering Heights, a book I am on record as considering utterly insane. Win has been ill in a sort of Beth-Marchish-way (sorry, I’m currently reading Little Women) ever since a bout of scarlet fever, and she finally goes away to France to a clinic with a reputation for strengthening patients with otherwise terminal 19th century swooning disease. I kid, but I was never clear on whether there was any science behind Win’s recovery. The story seemed thin in that regard, anyway. Merripen has a Tragic History that makes him feel unworthy of Win, a plot point that is belabored unto death, until he just gets over it. I didn’t like Merripen that much, and I also didn’t like how often he was referred to in animalistic way – his size and allegedly savage nature are frequently alluded to. Though the heroes of the first two books in this series are Rom, and of course the Hathways aren’t racist, because they’re the Good Guys, the terms used to describe the two men aren’t exactly woke. Particularly considering the books were written in the 21st century, that put me off a bit. My grade for Seduce me at Sunrise is a C+. 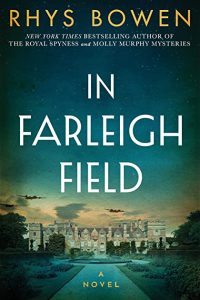 In Farleigh Field by Rhys Bowen

This was an Amazon First Read that had been on my Kindle for about a year. I don’t have the best luck with Amazon First Reads, so I sort of put off starting it. I actually ended up liking this World War II-set book quite a bit. It’s a bit of a mystery/historical fiction/suspense hybrid (the author is apparently a mystery writer). Farleigh Place is the ancestral home of Lord Westerham, and when the youngest of Westerham’s daughters finds the body of a soldier whose parachute failed to deploy, it sets off a chain of events that ends up involving several members of the Westerham family and those around them. Pamela Westerham is the middle of the family’s five daughters; she is working as a code-breaker in London. Her childhood friend Ben, the vicar’s son, is also involved in important war-related work, though like Pamela, he has to keep it secret. Their friend Jeremy, a dashing RAF pilot, has escaped from a POW camp in Germany and made his way home. The news is welcome to Pamela, who has long been in love with Jeremy, but Ben’s feelings are more mixed. For one, he’s in love with Pamela, and there’s also the fact that he was injured in a plane crash Jeremy’s recklessness caused. The injury has kept Ben out of the war, a circumstance that is viewed as shameful by many and one for which Ben feels very self-conscious. Finally, there’s Pamela’s sister Margot, stuck in Paris since the war started and in increasing danger from the Gestapo. There are a lot of moving pieces in this story but it’s tightly plotted and well-written. I gave it a B+ and might check out some of Bowen’s other books.

→ Jennie
Previous article: REVIEW: Flavor of the Month by Georgia Beers
Next Post: REVIEW: Simon the Fiddler by Paulette Jiles