What Janine is Reading: Late Summer to Fall of 2013 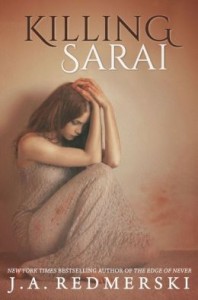 I’m not sure whether this self-published 400-page romantic suspense novel qualifies for the New Adult category. On the one hand, the heroine and main narrator of the story (at least in the first 38% which I read) is only twenty-three years old, and Redmerski is also the author of the popular New Adult novel The Edge of Never. On the other hand, though, the heroine’s love interest in this story, anti-hero Victor, is around forty.

Killing Sarai has a fresh and compelling premise. Sarai has been held captive against her will by a Mexican drug lord since she was only fourteen, and Victor is the first American she has seen during her nine years in captivity. Victor is a hit man hired by Javier, the aforementioned drug lord, to take out a rival. In order to escape the compound where she’s held, Sarai manages to sneak into Victor’s car with a gun.

Sarai takes Victor hostage at gunpoint and tries to threaten him into helping her escape, but even in this part of the book, Victor is more in control of the situation than she is, and once she tires, he quickly takes charge.

Sarai convinces Victor to use her as leverage against Javier, but what she really needs is to find freedom and bring aid to Lydia, a friend and fellow captive who has remained behind. Victor, meanwhile, remains an enigma. When he’s offered even more moolah to kill Sarai, will Victor, who has begun to admire her, be able to do it?

This novel sounded good on its Amazon page – I was hoping for something like Anne Stuart’s Black Ice, which I adored – but the reality was not as engaging as I had hoped.

Sarai’s narration had some emotional appeal at times, but at other times grammatical missteps and the over-explaining of simple gestures (such as “Niklas nodded in respsonse, understanding my intent”) disconnected me from the author’s voice.

A bigger problem was that the pacing felt slow and the book seemed in need of editing and tightening.  Additionally, Victor’s POV was inserted in a way that felt intrusive. Most of the hundred and fifty pages I read were narrated by Sarai in first person. Up until p. 89 we don’t hear from Victor at all, but on p.89 we get a six page scene in Victor’s first person POV, and then we don’t hear from him again for a another long stretch of over fifty pages.

And when his POV does finally resurface, not only is it jarring, but it doesn’t feel true to the character. Up until this part of the story, Victor was largely silent and shut down. Now he’s suddenly empathic and in touch with his and Sarai’s feelings. This was the point at which I lost what patience I had left and quit reading.

I must add also that in the 150 page section I read, all the Mexican characters were stereotyped as criminals in the drug trade and there was considerable violence against women as well.  Killing Sarai rates a DNF. 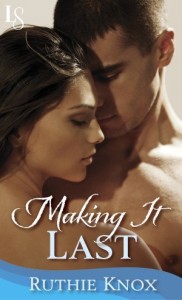 Making It Last by Ruthie Knox

Chalk this up as another read I wanted to love but didn’t, though I did like it. I greatly enjoyed a few of Knox’s earlier works, including How to Misbehave, the first part of Amber and Tony’s story, to which I gave a B+ grade. Making it Last, the sequel, catches up with these characters fourteen years later so we readers can see what marriage has done to their relationship.

I was originally apprehensive that this marriage-in-trouble novella wouldn’t work for me because it was a sequel to a happy ending story. My fear turned out to be groundless in the sense that I absolutely adored the first third of the novella, which set up the problems. As Courtney Milan commented on Willaful’s review, the problems Amber and Tony experienced in their marriage were “problems of too much love.”

With an expensive mortgage and three active boys, Tony, a builder, and Amber, a stay at home mom, were overworked and left with little time for each other at the end of the day. I loved the way the problems, as well as the love, in the marriage came through in the first third. But this section felt so real that once the couple were alone in Jamaica and the novel switched gears to the sexytimes, it happened too fast for me and didn’t feel entirely organic to the story.

And while I like the final third better, the interlude with the amazing sex made it feel wobbly. I needed more time spent on the resolution of the problems, because a years-long pattern of behavior in a relationship is harder to change than can be done in a couple of days alone and a couple of honest conversations.

Making it Last was a too-light treatment of heavy subject matter for me – I feel that his story really needed to be a novel-length work. But as always, I enjoyed Knox’s voice and the way she grounds her stories in specific details.

I’m probably the only reviewer you’ll see grading Making it Last lower than How to Misbehave, but I feel that while Knox has mastered the more traditional romance plots like those of About Last Night and How to Misbehave, her projects that take on more serious subjects like those in this novella and in Big Boy show their seams to a greater degree. I give Making it Last a B-. 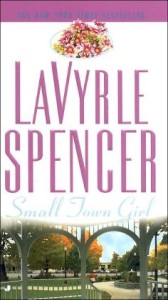 I’ve been waiting for LaVyrle Spencer’s digitized books to come down to reasonable prices with little luck, and so I finally reached a point to which I rarely resort nowadays, and took this book off my paperback TBR shelf.

I have read a number of Spencer’s romances, both historical and contemporaries, in the past, but this 1997 contemporary romance was one I hadn’t tried before. It begins with country music star Tess McPhail returning to her small hometown in Missouri after eighteen years away. Tess has come home because her sisters insisted it was her turn to care for their elderly mother while she recovers from a hip replacement surgery. Tess has reluctantly agreed, although her mom’s unchanging ways drive her crazy.

Another thing that drives Tess crazy is her mother’s affection for Kenny Kroneck, a helpful neighbor who as a boy had a crush on Tess and whom Tess and her friends mocked for it in high school. Kenny is now the divorced, good looking dad of a teenager who is not only Tess’s biggest fan, but a musical prodigy herself.

It is Kenny’s daughter Casey who brings Kenny and Tess together despite their initial animosity. But standing in their way is Tess’s boyfriend-of-four-dates, Hank, now on tour with his own band, and Kenny’s girlfriend of eight years, Faith.

The descriptions of small town life, Tess’s relationship with her mother, and her connection to Kenny’s daughter Casey were conveyed with warmth and attention to detail. Tess’s budding attraction to Kenny was also appealing, but only up to a point.

My stumbling block was the handling of Kenny’s breakup with Faith. Hank and Tess did not have much of relationship, but Kenny and Faith had dated for eight years, and Kenny had even asked Faith to marry him more than once. Faith turned him down because she did not want to leave her church for him (she was Catholic and he was not) but they continued to see each other.

It is true that Kenny had never fully gotten over his high school crush on Tess and that Faith seemed like someone who didn’t know how to enjoy sex, but after eight years with him, I thought Faith deserved better than she got from Kenny, who didn’t break up with her until he was sure of Tess.

Also, Kenny’s daughter Casey encouraged Tess and Kenny’s affair despite the fact that Faith had been something of mother figure to her for eight years. That struck me as contrived and difficult to credit.

An additional problem for me with the story was the fat-shaming portrayal of Tess’s older sister Judy. Judy was rude and sullen around Tess, resentful of Tess’s success, but the story pinned this on Judy’s weight issues. Judy’s walk was described as a waddle, and Tess and her other sister shared the opinion that if only Judy joined Weight Watchers and lost some weight, her rudeness to Tess would cease.

Between the treatment Judy’s character received in the narrative and the treatment Faith got, I found I couldn’t really enjoy Small Town Girl as much as I wanted to, despite the high quality of Spencer’s prose. C/C+.