A Selection of December Harlequin Presents

I haven’t had much luck with Harlequin Presents subscriptions of late. In December, I enjoyed three of my eight books. The problem is that I’m never sure what books I’m going to enjoy and thus the subscription seems worth it. I guess I’ll reevaluate mid year 2012. 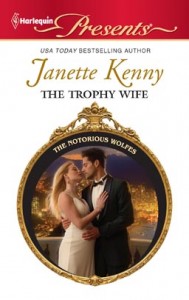 The Trophy Wife by Janette Kenny is the next to last addition in the Notorious Wolfe series (or Bad Blood series as it was originally labeled by Mills & Boon). It featured a model with an eating disorder and computer billionaire. While I appreciated that the story attempted to tackle the issue of anorexia and societal concepts of beauty which prizes thinness over everything, I felt that the story was overloaded with sex and dealt very little with the conflict between the characters. I wasn’t even convinced that they knew each other by the end of the book. They had been married for nearly two years but spent so little time together, wrapped up in their own jobs, that they hadn’t even seen their partner’s homes which may have been okay if the first time that they actually went to the other’s homes wasn’t by the 70% mark of the book. C- 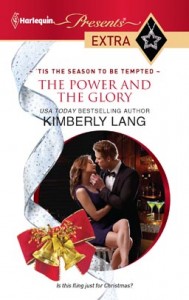 The Power and The Glory by Kimberly Lang. I bailed on this one after the second chapter. The hero is the campaign manager for his father, a Senator, who sounds like a dickwad and the heroine is a protestor for some environmental lobbying group. I am so sick of politics and politicians that I could not stomach reading more than about 20 pages of this book. Maybe in another era I would find this more palatable but, alas, could not. DNF 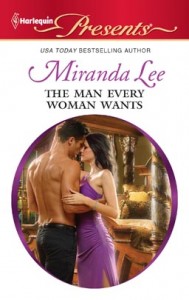 The Man Every Woman Wants by Miranda Lee. The heroine is a lawyer who does contract work for a sports agent. She confesses that she has been weaving a tale about their faux engagement to her dying grandmother and now her dyying grandmother wants to meet him. The hero agrees to do this favor for her and has a bit of fun with it. The heroine’s family is sports mad and the heroine showing up with a former star athlete and current sports agent increases her cachet. B- 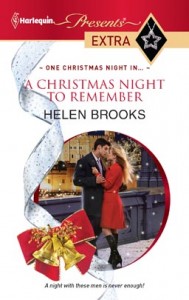 A Christmas Night to Remember by Helen Brooks. My main complaint about this story is that it takes place over two days and the couple has serious issues. The heroine is involved in a terrible car wreck. She’s maimed and scarred and has never felt secure in her husband’s love. He’s so beautiful and so rich and there are always dozens of women casting lures for him, all of which he has steadfastly ignored. The heroine was beautiful prior to the car wreck and she prided herself in being able to fit in with the fast and fashionable but now that her legs are less than perfect, she doesn’t know what will become of her and she’s sure that her husband will leave her. In order to prevent him from leaving her, she’ll leave him. He refuses to leave and in the space of two days (right before Christmas) convinces her anew of his steadfast devotion. I should love this story. It is the kind of Brooks’ story I usually enjoy but I wasn’t convinced that the heroine’s deepseated emotional fear could be assauged in just a couple of days. C 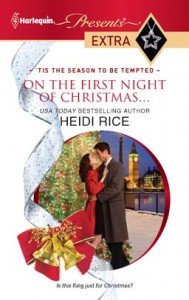 On the First Night of Christmas by Heidi Rice. Cassie gets splashed by a car careening around the corner while she is looking at holiday windows at Selfridges in London. Rather than be a doormat, she marches over to the vehicle, stopped at a signal and bangs on the window. She tells him off and when he fails to provide an appropriate response to her, she jumps in the car only to realize that the driver is a former high school classmate of hers, one she’s always had a crush on. Just off a broken engagement, Cassie’s confidence is at an all time low and when Jace Ryan comes on to her, it’s like a balm to her wounded ego. They embark on an affair, destined to only last until the New Year when Jace returns to New York. In that time period, Cassie falls hard for Jace but Jace is confused by his feelings. He doesn’t really believe in love and just wants to enjoy the moments as they come. I really enjoyed the ending because I felt like it didn’t force the issue. It does have a traditional HEA (provided by the epilogue). B 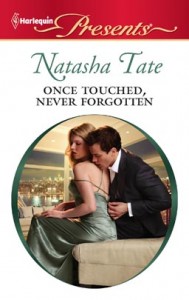 On the First Night of Christmas actually had a similar conflict to Once Touched, Never Forgotten by Natasha Tate, a book that I didn’t like much. Once Touched, Never Forgotten is a secret baby story. The heroine decides that the hero won’t be a good father and more importantly, doesn’t want to be a father so when she finds out she is pregnant she leaves him. Five years later he rediscovers her and her secret baby. She had a terrible childhood and was abandoned by her own father. She projects her fears onto the hero that he too will abandon their child. Of course, she never gives him the opportunity to choose. The hero isn’t sure he knows how to love but he promises that he will be a good father. The heroine is relentless in her accusations that he will be a terrible father based on nothing more than her own fears. She was a bitch but then he later uses sexual blackmail to get her to marry him so I figure that they belonged together. And unlike the Rice book, the hero in this one belabored his inability to love over and over again. I got it. She was abandoned. He had crappy relatives. The melodrama was over the top. D