My love affair with the iPod Nano Watch

A little history behind the Nano Watch 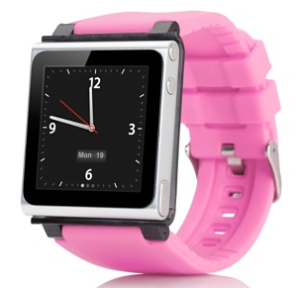 When the Nano was first introduced in 2005, I thought it was cute but totally a waste of money. There was no way to add new apps to it. It played music, had a tiny screen for some kind of video playback and that was about it.

In 2010, Apple introduced the 6th Generation iPod Nano and it was a square screen with a clip. Someone (not at Apple) started talking online about the Nano as a watch. Homemade watch bands were introduced and a cottage industry of makeshift watch bands for Nanos hit the tech scene despite tech fans like Engadget not being interested.

By 2011, even Apple recognizes the appeal of the Nano as a wristwatch and its updated operating system included 16 different watch faces. The TikTok watchbands, among others, are carried in the Apple store, both online and in their brick and mortar locations.

Limitations of the Nano Watch

The iPod Nano, however, has serious limitations as a watch. For one, there is no external audio which means to hear an alarm set on the watch, one has to be wearing headphones. The Nano goes to sleep regularly to save on battery power which forces one to press the power button to see the time. There is no bluetooth or wifi which requires one to use corded headphone and that is a pain while running or working out.  Further, and this is the most egregious problem in my opinion, there is no way to add apps to the Nano. You are stuck with what Apple deems is appropriate. There is no Calendar. No way to add a fitness app. You are stuck with the Nike+ app which I find to be generally worthless particularly in comparison to the great fitness apps out there. 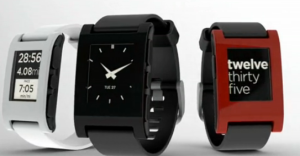 The computer watch is seeing a resurgence and new Android based watches are being introduced. One of the most talked about devices is the Pebble. Pebble has an eink face and interfaces with both your iPhone/iPod Touch and any Android device running OS 2.3. It can receive text messages and provide alerts. It is bluetooth compatible. It has caught the interest of the public to the tune of $10 million. I haven’t pre ordered one because I use my iPod Nano watch for one thing, primarily, and second some of the features like calculating distance while running requires the use of running with the phone.  I don’t like running with the phone but the if the Pebble takes off, then other devices and better ones will come to the market.

About the same time the 6th generation iPod Nano was released, Sarah Wendell started talking about the Georgette Heyer books narrated by Richard Armitage. I had to check it out. I tried one and was hooked. I had to get them all. (Thankfully I had a number of unused credits in my Audible subscription plan). I started to listen to audio books while I did unlikeable tasks around my house like washing the dishes or cleaning the toilets. Audiobooks actually made these tasks almost enjoyable. I started listening to audiobooks on my way to and from work; when I walked the dog; as I shopped for groceries.

I had to up my audiobook membership from gold to platinum. Listening to audiobooks has become a regular part of my daily activities. Most of the time I am listening to the books instead of the radio (I can’t stand sports radio right now. 95% of the time it is offensive toward women and minorities. I can’t handle the news and I can only listen to Call Me Maybe a few times a week).

Around the time I glommed onto the Armitage books, I realized that I now had a legitimate reason to purchase the iPod Nano. It would be a watch and an audiobook player. I bought the silver Nano and a silver metal watchband. I love its oversize look on my wrist. I think I hand sold about twenty of them when I was at BEA.

I do wear the Nano every day and plug it in every night. When I first started wearing it, I was irritated that I couldn’t just flip my wrist around and look at the time, but I’ve gotten used to pressing a button to see the time. I love the 16 different watch faces but admit to using a very standard and boring watch face. It’s too hard to tell the time when Kermit is staring at me. 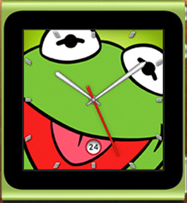 Some recommendations and warnings.

As for audiobooks, man, a good narrator can make a huge difference. For instance, I loved Dragon Bound by Thea Harrison but the narrator makes Pia sound whiny and petulant. Where I would provide a more flat intonation, the narrator uses a charged, accusing tone. I actually had to stop listening to the book lest I ruin the long form narrative version entirely for me. I am afraid that when I pick up the ebook/print version of Dragon Bound, I will be haunted by the narrator’s interpretation. It’s not that her voice is grating but just that her emotional interpretation of the words transformed Pia into a different character for me. The same narrator voices all of Thea Harrison’s books so I have had to avoid them.

Another narrator that I just cannot stand is Anne Flosnik. Her voice is thin and monotone. I purchased The Prize by Julie Garwood (and why I picked that title, I know not. It might have been on sale) and could only manage to make it through the first two chapters. That was a waste of credits but a good lesson. I now listen to a sample before purchasing every audio book.

Audiobooks I have thoroughly enjoyed is the Kate Daniels series. The voice of Kate Daniels is pitch perfect. She has just the right tone between world weary, snarky, and a little lonely. Her male voices were acceptable. (This is something you just have to endure – the male voicing the female parts and the females voicing the male parts).

I also have enjoyed the hell out of Robert Petkoff’s narration of the Kresley Cole books. There are some parts that he voices that are so hot, I had to fan myself. I prefer his English and Scottish accents over his Russian or Estonian accents. At times, I felt he made Lothaire sound like a dumb lug, even though Lothaire was as clever as they come. The worst part about Petkoff’s narration is when he is voicing the female’s orgasming. “I’m coming” from even a well modulated male voice trying to hit a falsetto is just cringe inducing.  One thing I noticed when listening to the Kresley Cole books was gruesome things were hard to stomach.  The initial scene in  A Hunger Like No Other includes Lachlain cutting off his leg and in No Rest for the Wicked when Kaderin was being attacked and drowned by sharks, I shivered with apprehension and a little distress.  Audiobooks seem to amplify everything.  In Warlord Wants Forever,  I almost had to stop listening because Nikolai Wroth comes off so rapetastic in the book. He is constantly forcing Myst to do things because he holds a magical chain that controls Myst.  In the novella, perhaps those scenes wing by quickly but in the audiobook, it seemed interminable.

The Warlord Wants Forever is voiced by a man and a woman: Hagan Verret, Simone Fomhar.  I thought this was interesting but unnecessary because it’s alternatiing chapters and so you still have Verret voicing the female thoughts during some chapters and Fomhar voicing the male’s.

Meljean Brooks’ The Iron Seas series is amazing in audio.  Audiobooks are great for adventure series. Faye Adele is the narrator and she does a great job. However, some of Rhys’ sexy lines sound really awful and there were times I wished I had an abridged version, a version without the sex scenes.  Overall, I’ve realized that I can do without the sex scenes in these books on audio unless they are from the male point of view and voiced by Petkoff.

My next audiobook is Generation Kill by Evan Wright and narrated by Patrick Lawlor.  It was made into a 7 part miniseries which aired on HBO and starred a young Alexander Skarsgard.  From what I read, it is a very even handed account of the horrors of battle, but of the bond that such an environment creates.

Audiobooks are expensive purchased alone.  Most of them run in excess of $25.00.  I think the only way that audio books make sense is to have a subscription.  Audible is where I buy my ebooks. I understand that there are a couple of competitiors: Tantor and Macmillan.  Macmillan features audio for its own titles and Tantor is a bit more like Audible, with a wide range of publisher offerings.

My recommendation is take advantage of one of the try it free deals.  Audible has one that allows you to sign up and (download one audio book.

for free. Remember to cancel your subscription before the end of 30 days, though, or you will be deemed a subscriber. Another Audible deal offers you three months at $7.49/month.

Tantor doesn’t have a subscriber option that I can see, but it does offer deals and discounts on a regular basis.

I’m always on the look out for good audiobooks, so let me know what you’ve been listening to (and whether the computerized watch interests you or not).