Let’s start the weekend off right.

Donations for Pets and Education – This might help make paying off those parking fines a little easier.

There were too many kittens in the animal shelter, just as there had been last year and the year before that. Like other shelters that swell to capacity during cats’ annual breeding season, Muncie Animal Shelter in Indiana was struggling this summer to meet the need.

“One day I was standing by the counter and somebody brought in six kittens,” said Officer Chase Winkle, a spokesman for the Muncie Police Department. “And before they could get those checked in, somebody came in with another four.”

To ease the pressure, police created a trade-off: For five days in July, people could pay for their parking tickets by donating to the shelter the equivalent value of cat food or litter. Residents who brought their donations to the police chief’s office with a receipt proving the value got their tickets wiped away. A police officer’s daughter works at the shelter and had made the department aware of the organization’s need.

The idea has swept the nation and other municipalities are running similar programs. Muncie ended up raising about $600 for their shelter. But wait – there’s more. Las Vegas started accepting donations of school supplies in lieu of parking fines in June/July. That idea, too, spread and now other cities are doing the same.

Greensboro, N.C., typically writes about $85,000 worth of citations in August and expects to lose an unknown portion of that revenue when some people use school supplies to resolve their tickets this month, said Stephen Carter, the business and parking manager for the city’s transportation department. That loss of funds is worth it, Carter said, to pay some of the classroom costs that typically come out of teachers’ pockets.

Inspired by Las Vegas’s program, Olathe, Kan., is running an initiative in which school supplies worth half the cost of a parking ticket will wipe away the citation. The colored pencils, glue sticks and other supplies collected through Aug. 16 in exchange for tickets worth up to $100 per person will go to the city’s public schools foundation, city spokeswoman Erin Vader said.

Some people who don’t even owe cities anything are kicking in, too.

Customer Service Reps aren’t all bad. – I will admit to shriveling up inside when I know I have to call a customer service rep. I mean we’ve all been put on hold “because all our representatives are currently assisting other customers” and then sat there listening to recordings telling us “how important our call is.” This is one time when the call really was important.

Thanks to the customer services representative’s quick thinking, Dan Magennis, 65, was able to walk out of the hospital with minimal symptoms just two days after suffering from the stroke.

Magennis, of Walker, was home alone Tuesday, Aug. 13 and called Comcast customer services to address a problem with his cable. He put his phone on speaker and placed it on a table, so he could take notes while he spoke.

But when the customer services representative answered on the other end, Magennis was unable to get a word out.

But Magennis was unable to reply. The only sound he could muster was “um.” He tried to move, but he realized his right leg wouldn’t.

It was then that he realized something was terribly wrong.

Kimberly Williams knew something was wrong. Then she Googled help in that location and stayed on the line until the fire department arrived.

Due to the quick thinking of Williams and the action of dozens of doctors, police and paramedics, Magennis is recovering from his stroke with minimal symptoms.

“I had a stroke and two days later, I’m walking out of the hospital. It’s incredible,” he said. “Most stroke victims don’t get to walk out of here like this.”

Woman Walks into NC Humane Society, Asks for 2 Dogs Who’ve Been There Longest with Special Needs – From unwanted to a forever home.

The Asheville Humane Society says it’s a moment that every shelter employee dreams about.

Last week, a woman named Leslie walked through their front doors and said, “Which two dogs have been here the longest, with the most special needs? I’m here to take them both home with me.”

Those two unwanted dogs were Sam, who had extensive medical issues and had been at the shelter for six months, and Brutus, who has severe separation anxiety and had been there for five months.

Be sure to watch the video.

Wow, this is awesome – This guy is epic. Words almost fail me.

Jon Potter was filling up his car at a Pittsburgh gas station when a woman approached and asked for a ride to battered-women’s shelter. He said no. She walked away, and he quickly felt a wave of regret. He got out of his car to look for her, but she was gone. Feeling terrible, he vowed to be kinder next time a stranger needed help. A few weeks later, in the spring of 2015, he saw his opportunity when someone on a Pittsburgh Reddit group needed a hand installing a television antenna. Potter, who is handy, did it for no charge and felt great about it. Then someone on the same Reddit group asked for a cat sitter and he jumped at the chance.

“It snowballed from there,” said Potter, 29. “I decided that for the next year, if anyone asks me for help, as long as it’s legal and as long as it won’t harm anyone else, I’d do it. It sounds ridiculous, but I did it.”

Well, now it’s 2019 and he’s still at it and has become a legend in the Pittsburgh area –

helping someone repair vinyl siding, moving furniture, fixing a leaky roof, changing a grandmother’s tire on the side of the road. All for free. He even raised $700 for a teen in his community who was injured while stopping a hate crime.

Now he’s upped his game even further. Potter recently donated a kidney to a total stranger after seeing an appeal on Reddit. He even lost 20 pounds before the surgery and helped the man install a French drain in his backyard. 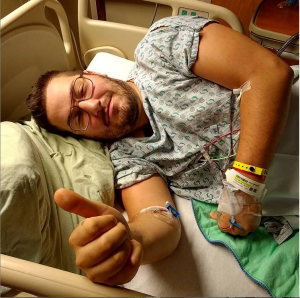