I went back to Bouchercon on Friday and Saturday and caught as many panels as I could, given my other responsibilities this weekend (why does everything always happen at the same time? Argh).  [Check out Sunita’s report from Friday] Unfortunately I had evening commitments both days, so I couldn’t hang out at the bar (which is of course where so much of the fun is). But the panels were well worth attending and I was able to speak to authors during the books signing slots, so I’m not complaining. I promised more pictures, so here’s a shot of the free swag we got in the tote bag: 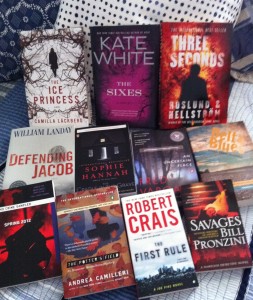 I went to all or part of eight more panels. I got up at the crack of dawn on Saturday to get to the 8:30 panel (hey! I had to commute!) because it was about epublishing and provocatively titled “Everything is Broken.” It was moderated by author Eric Stone and the panelists were two editors from New York houses, another author, and the proprietor of a mystery bookstore in Minneapolis. One of the editors was refreshingly open to the idea of ebooks. He stated that he didn’t think ebooks were entirely cannibalizing print; while print runs were definitely lower, ebook sales were increasing and that offset some of the decline. He also said that he didn’t think piracy was killing sales. His company has a lawyer who sends out C&D notices when they find out about illegal uploads, but the rate of piracy was “not enough to make a dent.” He compared it to playing whack-a-mole, which I think is precisely the correct image.

The most disappointing aspect of the panel, I’m sorry to say, was listening to the comments of the  bookstore owner. He was adamant in his refusal to stock any books published by Amazon, even by writers like Barry Eisler whom he had successfully sold in the past. He will keep Eisler’s backlist but not order anything from Amazon. When the moderator asked whether his bookstore had considered adopting Google Books’ program, which allows independent bookstores to sell Google Editions (ebooks) through their stores, he said no. He was supportive of authors epublishing their backlists, because it helped sell the newer books, but he wanted nothing to do with ebooks. He didn’t seem to realize (or he didn’t believe) that indie bookstores could benefit by selling ebooks. He acknowledged this could be self-defeating (and even used the “cut off our nose to spite our face” metaphor), but he was resolute. Handselling is the key, and handselling is exclusively about print to him.

A couple of librarians were in the audience and they emphasized how much ebooks were helping them. One compared it to the decision to embrace the internet and said that teaching people to download ebooks and the software to read them was much like that earlier experience. Another said that it allowed her library to be a 24/7 resource and ebooks didn’t require extra physical space, which was a big plus.

One of the last comments from the floor was warmly received by the rest of the audience, which interrupted her repeatedly with applause. A woman stood up and said (I’m paraphrasing here):

I’m not a writer, publisher, or seller of books. I’m a reader and buyer. I’m the one you all want. I buy ebooks, I buy print books. I’m a library trustee. When I travel I visit bookstores and buy their books. Your panel subtitle says “Friend or Foe.” I think this should be about collaboration and partnership. We’re in this together. We all want publishing to succeed.

I agree with her, but I don’t think the friend-or-foe mentality is going away any time soon.

When the session ended, Patricia Rice and I discovered that we had been sitting right next to each other, so we chatted for a while and then made plans to have lunch along with Eileen Dreyer, who is also local and attending the conference. We met up at noon and spent two hours in the Dubliner Pub (where the PCA romance group went last year). Sadly, we all had afternoon obligations so we stuck to sodas and iced tea. But it was wonderful to meet romance authors face-to-face. We romance people really are everywhere.

Right after the epub panel I went to a panel on writing mysteries with social justice themes, moderated by Sara Paretzsky and featuring Laura Lippmann, Colin Cotterill, Frankie Bailey, Libby Fischer Hellmann and Gary Phillips. Everyone on that panel was wicked smart and thoughtful in their discussion about how to write characters with opposite political views, how to write convincingly about social justice without preaching, and what issues should be written about more (Lippmann and Phillips mentioned urban black male unemployment and poverty, Hellman child slavery in Africa, Cotterill and Bailey the conditions for migrant workers). A comment that stood out for me was one from Colin Cotterill. When Peretzsky asked how the authors reconcile their political views with the requirements of the novel, Cotterill said (I paraphrase again):

I tend to write from every character’s point of view. I’m writing books that cannot be published and read in the country where they are set.  So I try to stand outside the setting, paint the picture and let you decide. I put myself very much in the middle [ideologically].

Colin Cotterill was my biggest discovery and author-crush of the conference (and he beat out some stiff competition). Keishon has been pimping his books for ages and now I totally see why. I picked up his first Dr. Siri book as well as his new release, and he was charming when he signed my book. He thought he was terrible on the social justice panel. So he’s modest, too. Here he is taking pictures of the audience before the “Cranky Streets: What’s So Funny About Murder?” panel, with Eoin Colfer to his left (sorry for the horrible quality, I was in the back so I could sneak out midway through): 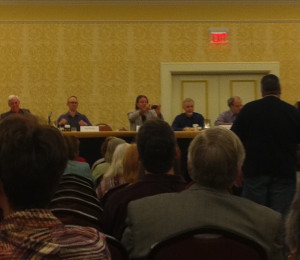 Some of the other highlights: I attended part of a western mysteries panel. Lori Armstrong was there, as well as historical and other contemporary writers. They agreed that the western setting allows them to write interesting and strong women characters. I sat in on part of a historical mysteries panel with Tasha Alexander. She was just as insightful and thoughtful as you’d expect, and I was sorry I didn’t see and hear more of her, but I’m definitely picking up one of the Lady Emily books. I went to the Q & A session with Robert Crais. My notes say “Handsome, witty, charming, thoughtful, intelligent. Too bad he’s a Dodgers fan.”

I discovered a lot of new authors who sounded so smart and funny and thoughtful that I want to read all their books. There were some boring moments on some panels, but for the most part, I felt fortunate to be able to attend. I was reminded over and over that authors are storytellers first and foremost, not just in their fiction but in their daily lives.

I also attended an LGBT authors’ discussion and book-signing session at my local independent bookstore, but this post is already long enough so I’ll write that up at my VacuousMinx blog, along with some more tidbits about the convention and thoughts about the mystery genre.

Every time I went to a panel I wound up buying books by an author. Thank goodness we just picked up some more bookscases. Here’s some of my haul: 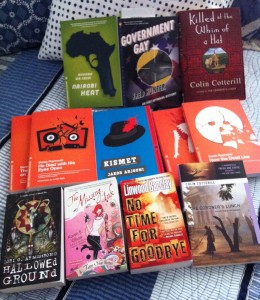 Finally, I attended a panel chaird by Colin Cotterill on Amazon reviews. He had requested the panel, and as he is one of the International Guests of Honor, Bouchercon agreed. I wasn’t sure what it would be about but I hoped it wasn’t just about bashing online reviewers. There was a little bit of that, but mostly directed at the genuinely stupid and thoughtless reviews, and mostly done with humor. Authors shared some of their favorite negative reviews, but they also read from reader emails that had especially touched and moved them. Linwood Barclay read an email from a teenager in a care home in England who hoped he would write more books because “there isn’t much to do.” Lisa Lutz said she loved the idea that her humorous Spellman series mysteries were not just “beach reads” but “hospital reads” that made people feel better in tedious and difficult times.

Cotterill closed the session with his favorite negative review, of an edition of the King James Bible:

I cannot top that. Next year, Bouchercon continues its tour of past-their-prime US cities and takes the convention to Cleveland. No Arch, but the Rock & Roll Hall of Fame!