The second part of the Reader Roundtables was content. (I really could talk about covers forever   but we had to move on).

Readers said that they were tired of paranormals and to expand on that, they may not be so much tired of paranormals but rather they want something fresh. One reader commented she wanted to see more fantasy ala CL Wilson. I saw Erin Kellison in the group and noted that she is purportedly writing/selling fantasy romance. It's on my Kindle, awaiting a reading. 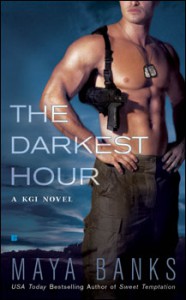 A number of readers said that they wanted more internal conflict, more conflict to do with the romance and less to do with what is going on outside of the relationship. (I think this is why Maya Banks' upcoming romantic suspense, The Darkest Hour,  worked so well for me. While there was suspense the real crux of the conflict is between the hero and heroine).

Someone commented that they wanted the "Wow" feeling that these characters "really love each other". Outside conflict doesn't necessarily deliver that “wow” feeling.

Readers were tired of books that lacked character development. I took this to mean that they wanted to see a character grow and change over the course of the book. (My notes say "rejicu-female in a dress" I think that must have been related to covers. My handwriting really sucks.)

Kristie J said she wanted more Westerns. She liked westerns because the heroes were more relatable. She likes the working man hero. The hero seems more down to earth, grounded. 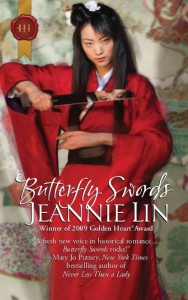 More than one reader said that they were excited to read Jeannie Lin’s Butterfly Swords.   I swear this came unprompted from the audience!   A few readers mentioned that they wanted to read alternative locations.   Carrie Lofty sold a book to Pocket set in South Africa.

I’m doing this with Karen Marie Moning’s “Fever” series. I heard that there were huge cliffhangers and I am content to wait until the series is complete before committing.   I’ve also heard that authors don’t like this because if we readers wait, there might not be a series end, but for many books, I’ve just been reluctant to start a series without having all of them available, if possible.

When asked about storylines that readers felt were missing we received the following responses:

-. Would like more edgy characters
-..Strong heroines who are not cold and are looking for love
-.never the storyline that matters, it's always about the characters

Again, I’m interested in hearing what you have to say about the contents in books.   Are there storylines that you aren’t seeing being published?   Do you think you are getting enough internal conflict or character development in your stories or do you feel authors are relying too much on external factors?   What about series books?   Do you feel differently about series books v. connected books (and why won’t publishers put the series numbers on the sides and front of the books)?