My Sunday at the 2012 Los Angeles Times Festival of Books, Part 2 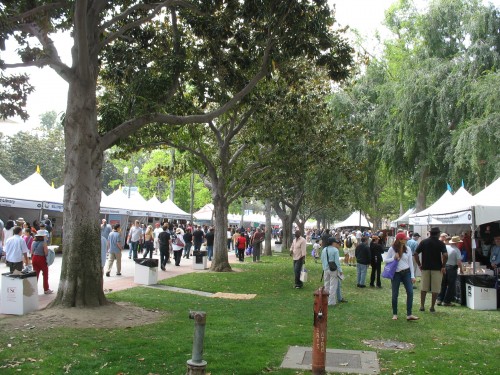 I attended the Los Angeles Times Festival of Books on Sunday, April 22. The first part of my report on the festival can be found at this link.

And now onto Part 2. 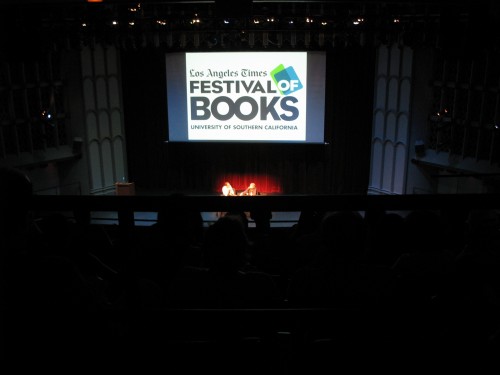 After the mornings panels described in part 1 of my report, we stopped at the food trucks for lunch, which took longer than we expected due to long lines. We ended up hoofing it to the darkened Bovard Auditorium where Anne Rice and Scott Timberg sat on stage discussing various aspects of her writing and her career.

Rice needs no introduction but I will include her festival guide bio anyway:

Anne Rice is the author of 31 books, including “Interview with the Vampire” “The Witching Hour” and “The Wolf Gift,” her latest. She lives in Palm Desert.

As for Scott Timberg:

As we walked in, Rice was finishing up talking about her latest novel, The Wolf Gift. We missed much of that topic but came in time to hear Timberg ask her about why she was drawn to writing about the supernatural.

Rice replied that she was not interested in characters unless they have a conscience and moral concerns. She said she tried to write realism and it was only when she started writing about vampires that she was able to connect with that mattered to her. Themes like the Catholic Church and fear of death were subjects she could approach with vampire characters. A lot of genre and speculative writers say they had a similar experience, Rice said.

Timberg asked Rice if she had a difficult time with selling or marketing Interview with a Vampire due to its supernatural aspect. Rice said that Knopf put a lot of stock in originality and a fresh voice so Interview sold for publication easily but the bigger problem was going against the bias of reviewers. The book got bad reviews in the major media outlets and good reviews in other places.

Interview with a Vampire was originally a flop as a hardcover and what saved it was the commitment on the part of its paperback publisher to print many copies. The number of copies printed kept it alive and it became an underground hit. The good reviews in smaller outlets helped save it as well, and so did the gay community, who saw the book as a gay allegory.

Rice said she was stunned when Interview with a Vampire didn’t get taken seriously. Now it’s easier to get original fiction with fantasy elements taken seriously than it was back then.

Timberg asked about Rice’s childhood in New Orleans and Rice said her mother would make up stories when she was a child (she described an eerie, imaginative story her mother told her as a child). Her mother was also familiar with the life stories of real people which she told to Rice, and she would tell her the plots of movies like The Count of Monte Cristo blow by blow. She told her the stories of the Bronte sisters, and they had books by Dickens at their house.

She also grew up listening to the radio and in those days, the radio was full of stories and soap operas, as well as radio shows like The Lone Ranger, Superman, and storytelling shows. There was so much on the radio.

Rice said that in New Orleans you couldn’t grow up without meeting people who were Catholic and/or had gone to Catholic school. Catholicism and its rituals, music, and art such as stained glass windows had a profound effect on her.

Her love of history also came from church, from stories about saints from earlier centuries, and there were priests and nuns at her church who came from Europe, so she learned about other times and places and became fascinated with them in this way.

Timberg asked why Rice’s erotica had to be written under a different name, and Rice replied that “Putting a fake name on it just freed me to write total pornography.” This got some laughs from the audience.

“I saw myself as writing authentic pornography,” Rice said. She was tired of flipping through books to find the sexy parts and wanted a book where these were on every page. “I thought people wanted to read stories of dominance and submission and if I could just write the Disneyland of S&M they’d be happy.”

Rice’s editor at Knopf was not interested in the project and her agent also thought it would not sell well and tried to encourage her to write something else. But her editor recommended the editor at another publishing house who was interested and did publish it.

Rice eventually claimed the Sleeping Beauty books but first, she told her father she had written them so that he wouldn’t hear about it from someone else, and asked him not to read her erotica.

As the signings for her books got bigger and bigger, she got to meet a lot of her readers in person and she enjoyed it. For a while she had a phone line readers could call to leave messages for her. She would reply to those messages on her website. She had a website early on thanks to her tech savvy cousins.

Her current Facebook page has 600,000 people on it and she asks her fans for recommendations of movies, books, television and music. When something is troubling her, she asks them about it and gets a thousand comments within a few days which she prints out and reads, or sometimes reads on the screen. 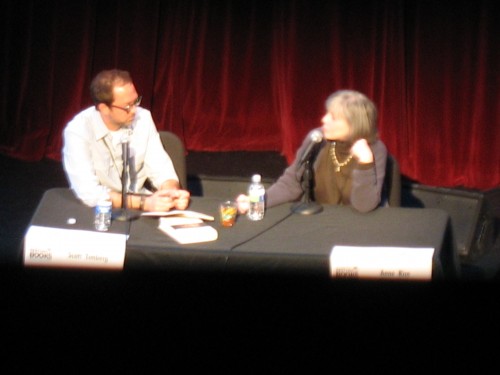 Timberg asked Rice about her political views which she frequently discusses on her Facebook page. “What is going on in the world of politics that interests you or troubles you?” Rice said that she posts links to Nick Kristof’s columns at The New York Times — he is a hero of hers because he goes into famine stricken countries to report. She also likes Maureen Dowd and Fareed Zakaria.

Rice said she wants to see health care reform happen in this country. Early on she worked as a health insurance examiner and she never forgot the way insurance works – how they try to get out of paying people for claims. It troubles her.

She said sometimes people try to shut down her Facebook page because they don’t agree with her political views.

Timberg then said, “You’re interested in women’s issues like reproductive rights and human trafficking, I don’t know what you call that–” and Rice said, “Social justice.” The audience applauded.

Rice then said that she understands the passion on both sides of the abortion issue but she is very disturbed by the attacks on those she sees as the most vulnerable people in the debate – pregnant women. There has recently been a lot of low level legislation that makes it hard for women to get information about contraception, and she feels the attacks on Planned Parenthood are “unconscionable.”

She added that she hasn’t been able to write about this in her novels so she posts about it a lot on her Facebook page. Another issue that worries her is the kids who are abused in religious camps.

Timberg asked Rice about the sense of place in her novels and she said that she thrives on change, moving and trying new places – things like flowers, yards, and trees mean a lot to her. She finds Palm Desert, where she now lives, very beautiful.

Where she is always creeps into her fiction. Interview with a Vampire started in San Francisco where she was living at the time. The opening scene is set on Divisadero Street and she still remembers how she got the idea for the book. She had just been to a radio interview – her husband had been interviewed – and she saw an old Victorian house on Divisadero Street and started thinking “What if a radio interviewer was interviewing a vampire here?”

She added that she loves writing lush books where place is almost a character.

Timberg said that unlike the era of writing realism in which Rice was first published, today’s era is the era of Harry Potter, Twilight, Young Adult fantasy and dystopian novels, and Deborah Harkness. He asked Rice if she feels she played a role in bringing about this change.

“I don’t know if I played a role,” Rice said. “I think a time came when people were just hungry for it.” She related her first experience of seeing Star Wars at a convention in the seventies before the movie came out, and how wonderful the movie was. She said that Star Wars had been turned down by every studio but the people who worked on it made the movie they wanted to see and people loved it.

Superman with Christopher Reeve was made soon afterward and it got into Superman’s backstory. People wanted that, and they wanted the vampire’s backstory.

Rice: “I don’t know how much of a role I played. I think I was responding like everyone else.”

Timberg: “You had the same hunger readers had?”

She added that she wants to develop The Wolf Gift into a series. She loved writing the vampires but the problem is that she’s writing in a world she developed twenty years ago. She wants a new playground now.

Next up in Part 3 of my report on the festival, “Fiction: Love, Actually” (a romance panel!) and “Young Adult: Future Tense” (dystopian and futuristic YA).