Day two began with a panel conducted by Bowker on data regarding domestic and international ebook readers.  Bowker does quarterly surveys and annual surveys.  The data they covered was from the end of 2011.  Their panel began with 1500 members and was culled to about 800 individuals.  The consumers were those who have acquired one ebook in the last 18 months.

Most technology adoption follows a hockey stick curve.  Up and then over.  There are some technological adoptions that fail to catch on, but for the most part, you see upward movement, often rapid, until there is a leveling off.  Right now that is what is happening in ebook adoption.  There was rapid growth, particularly from January 2010 to January 2011 but since that time, ebook growth has slowed and is only incremental.

All sectors of paper books declined.  Hardcover spiked in 2009 and then dropped off after.  Trade paperbacks have seen a slow decline and mass marketing sales are plummeting.  eBooks represent the only growth market at this time.  However, the growth of ebooks has not offset the decline of paper book sales.

The best eBook sales category is fiction and ebook adoption has been largely driven by fiction.  Adult fiction ebook sales represented 26% at the end of 2011.  Science fiction was 29% and Christian fiction was 40%! while Juvenile fiction was 11%.   The buyer of digital books is primarily women (70%) with good income and educated.  These “power buyers” buy at least four books a month.  The power buyer represents about 35% of the ebook buyer market but 60% of the sales.  Those are comparable to the numbers in print as well.  The ebook buyer still buys both print and digital but primarily digital, according to Bowker. 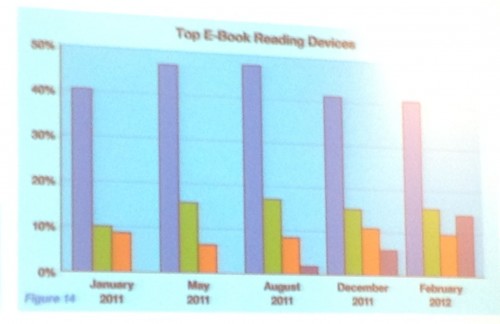 The current slate of dedicated reading devices are made for fiction. Amazon still dominates in the dedicated device arena with only small fluctuations downward.  The biggest increase in ebook device buying in in the Android market which Bowker attributes to the nook and the Kindle Fire.  Interestingly, 3/4 of readers have never bought an ebook and 14% of those who own a device have never purchased a book.  There were two reasons for this.  First, readers prefer print, but second, and most importantly (and by important I mean by bigger numbers), readers cite the inability to share as a reason not to buy an ebook.

An audience member asked whether ebook sharing could just be easily solved by technology.  The Bowker individual acknowledged that this is an issue of DRM. I restrained myself from shouting that publishers won’t allow us to share the darn book even though there are lending technologies available.   I additionally thought to myself that publishers are happy that the lack of sharing is deterring ebook adoption. The slower the rate of ebook adoption, the better.

I asked what was the size of the book market that they were measuring and whether it included self published titles from Kindle Direct, Smashwords or Pubit! and I was told that they have a white paper (for purchase) regarding the self published market coming out soon.

Bowker ended stating that ebooks may be plateauing but are not confident about the direction of ebooks in the future. This might be the calm before the storm or it might be a settling of the market. 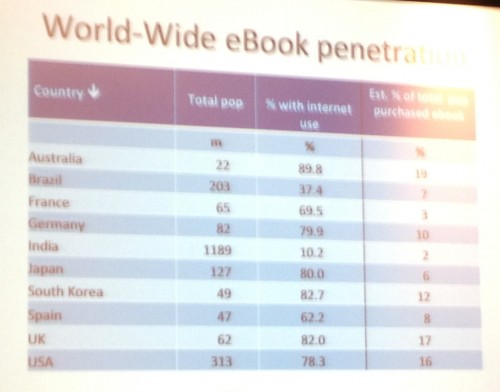 Internationally, there is a correlation between a country’s connectivity to wifi and their percentage of books purchased digitally.  It may come as no surprise to many of the Dear Author readers, but one reason why denizens of various countries, like Australia, buy digitally it is because digital brings content that wasn’t being supplied by the traditional print vendors. In other words, there is increased access to books for Australians with digital books.

I was told that India and Africa have large mobile access penetration but poor wifi access.  However, India and Brazil have the highest number of ebooks sold in the last six months.  Bowker attributed part of this to the size of the Indian population. A small percentage of a large base is still a large number.  With Australia, it was intimated that there isn’t much opportunity for growth because of the small population base.

Nearly 50 % of all content downloaded by readers in the US is free.  In other countries, the numbers are nearly as large for free downloaded content.

Next I interviewed Mark Lefebvre, Director, Self Publishing and Author Relations.  Kobo is betaing The Writer’s Life and will be launching it for use by the public by the end of July.  The terms are as follows:

Forever invited a few bloggers to lunch.  Authors Rochelle Alers, Hope Ramsay, Jill Shalvis, and Elizabeth Hoyt were present.  I sat next to Rochelle Alers, a very nice lady, and her editor.  We agreed that Ms. Alers should host a giveaway (or rather Forever would on Ms. Alers behalf) and that will happen at the end of June.  I sat across from movie buff and critic and Fresh Fiction affiliate, Gwen Reyes, and publicist Nick Small.  I also sat next to Grand Central editor Selina McLemore.  We spoke about art, Boxing Helena, a play about selling your children, and butter cows and huge bulls.  (In the interest of transparency, I share this.)  It was low key and quite nice.

Actually, I would be remiss if I didn’t mention that Selina McLemore edits authors such as Jennifer Haymore and one of my favorite romantic suspense authors, Kate Brady.  Kate has a new book out in November and it sounded really great.

The BEA Exhibitor Hall is enormous. I felt like I was a mouse in a maze as I walked up and down the aisles.  Essentially, publishers and other vendors set up booths and then advertise their wares to the other BEA attendees who are primarily booksellers and other industry individuals.  The trade people are everyone from those who sell the cardboard containers that hold the racks of books at the bookstore to printers. 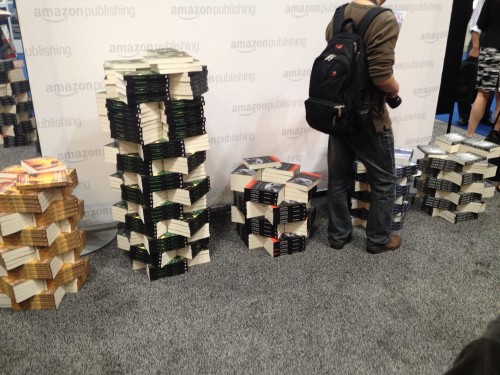 Many of the publishers had free arcs in stacks that people could just take.  I felt strange doing this, like I was coopting something inappropriately so I always asked.

Other books were available only if you stood in line and waited for an autograph.  This is Deborah Harkness signing copies of Shadow of Night, the sequel to A Discovery of Witches. 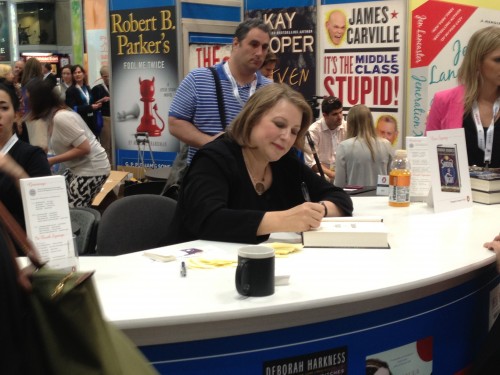 There was quite a bit of interest in this book but I thought the longest line was at the Harlequin Teen/YA panel.  There is a huge emphasis on Teen/YA fiction. There was a BEA Buzz panel akin to the editor panel I sat through yesterday.  Many of the houses promoted their YA offerings such as Penguin and Hachette (Little Brown for Young Readers, for example).  Genre fiction is largely ignored by the larger houses.  BEA appears to be about selling the “big books” to as many booksellers and retailers as possible which makes good business sense.

Sourcebooks had a nice booth and Susanna Kearsley was signing: 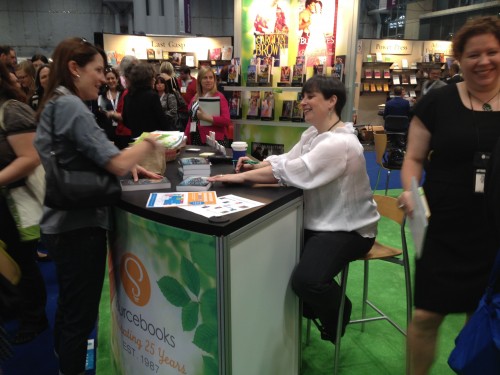 Here is a picture of the large Harlequin booth. The line for the YA Harlequin panel which included authors like Julie Kagawa was surpassed only by the line for Starbucks in the Javits main floor.  I couldn’t take a good picture because the line was interrupted by booths and was quite spread out. 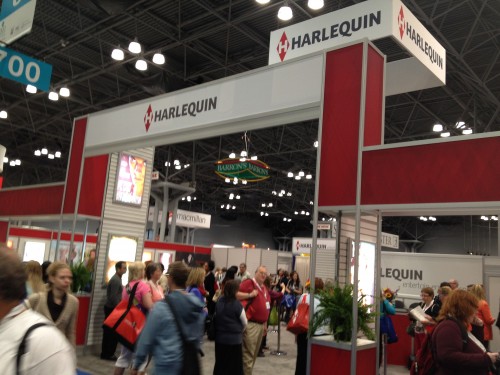 The other romance publisher I saw was Entangled. They had some lovely print books.

BEA is clearly a business oriented conference.  Each booth had at least one meeting area where people conducted interviews, meetings, business deals.  The focus of BEA is on hardcover books, children’s books, middle grade books, YA books (in terms of fiction).  Genre fiction isn’t very prevalent.  There are authors who sign at the RWA booth or Mystery Writers of America booth. Avon has a number of its authors signing but overall, the focus seems to be on books other than genre fiction.  My take is that the books that they are focusing on are the ones that they believe have the biggest margin for profit.

If one is a romance reader or even a mystery/thriller reader, then the books that are being given away or the focus of the convention isn’t likely to meet your interests.  Still, it’s a remarkable spectacle.  I have to go to sleep now. I’ve a breakfast for “power readers” at Random House at 7 am.  And no, I have no idea what a power reader is.