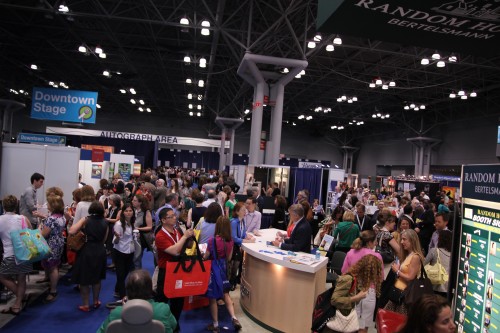 Last year, I scheduled interviews and meetings and was exhausted by the end of the first day.  This year, I decided to take a more leisurely approach. I met with a few editors, attended a couple of parties, and stood in line to get a couple of books signed for the tot (Lemony Snicket and the Lunch Lady).

BEA has seen a huge increase in YA interest.  This may be due to the BEA Bloggercon attendees or it might just be representative of how much YA has grown as a area of publishing.  There was a large digital presence including Kobo and Amazon but Barnes & Noble (and Nook Press) was conspicuously absent.  I heard from many that there were fewer free galley copies but more readers and no one on the trade side really knew what to make of that.  Was it because belts were tightening that there were fewer galleys? Maybe they were saved for Power Reader Day on Saturday?  Maybe it was because galleys are having less of an effect? or that the general tradeshow audience of booksellers, librarians, and others aren’t as important as they are in the past?  Verdict = unsure.

There was a strong indie author presence from the raft of self pubbed authors who had been picked up by publishing houses to the booth manned by CJ Lyons, Hugh Howey, Stephanie Bond, and the like.  In terms of publishing gossip, there was more murmurs about S&S and HarperCollins pairing up to give them more power at the bargaining table, much like Random House and Penguin.

From everyone I heard that now is the time of experimentation, at least for genre publishing.  I don’t speak to a lot of literary imprint individuals (actually none) and I’ve been told that the publishing business is markedly different for the hardcover and literary fiction titles so everything you read here is about genre publishing only.

Most of the publishing people I spoke to equated the mass market with digital books, meaning that digital books were replacing the mass market.  Mass market orders are down significantly from every account whether it is traditional retailers or grocery stores or big box stores. I got a sense that no one is terribly upset about this but mostly because they feel like they are starting to get a handle on what the direction is for the future of their business (strongly digital for genre publishing).

I also heard from editors that they are going to want to see authors submit different stories because they want to explore niches and experiment with different content. I asked how they were going to get the word out about that and proposed that more publishers take direct submissions.  I was told the problem with non agented submissions is the need for more editorial staff to sift through these.

Apparently some digital houses like Entangled is getting help from unpaid internships.  I’m not sure if that is something that traditional publishers can employ or not but I do think that the reduction of “different” being seen by editors at the major houses has to do with authors wanting to skip the agenting process and go directly to the editors. It is easier to do this with digital imprints like Entangled, Carina, Samhain and, with increasing frequency, Omnific.

But I was heartened by what I heard from the editors.  One editor wanted to see more gothics.  Berkley Heat is putting out an m/m in print through its Heat line (SU Pacat’s Captive Prince reviewed here) and My Cowboy Heart by ZA Maxfield through Intermixx.  Depending on the sales of those, I suspect traditional publishers beyond Harlequin’s Carina Press will be searching for more m/m fiction.  Harlequin’s Kimani is going to be doing more Interracial romance and I was told to check out Kimberly Kaye Terri.  We should expect to see more interracial romances throughout all the Harlequin lines as well.

Harlequin throws the best parties at nearly every conference and this year’s BEA was no different.  Harlequin’s big news in 2013 was the launch of the Cosmo Hot Reads, a cross branded imprint designed to publish 2 novellas of thirty thousand words.  The idea is that the stories will be modern (city based) and young.  The launch author was Sylvia Day and her pictures were everywhere.  Everywhere, you guys. 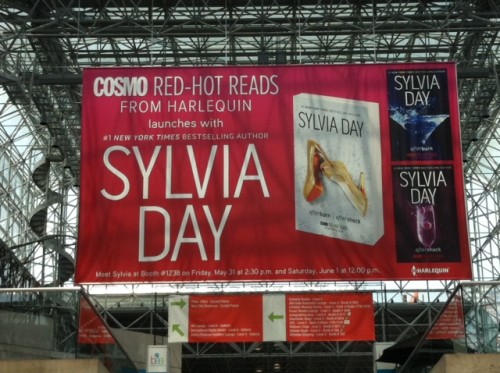 A full sized sampler of Lauren Dane’s Cake was included in a giveaway bag. I’m not a huge Dane fan and I’m not a great lover of novellas, but this one worked for me. I thought that there was a good mix of heat and romance in the short novella.  Upcoming novellas include titles from HelenKay Dimon, Tawny Webber, and Sarah Morgan. I read the chapter excerpts from Dimon and Webber.  Dimon’s sounds interesting and Webber sounds like an early Blaze (complete with four girls and a list of crazy things with a silly name).

My last meeting of BEA was an Amazon Roundtable.  More on that tomorrow.