This year’s Romantic Times convention was my fourth in a row. Since my first visit, RT has underwent a dramatic change and much of it has to do with moving the focus away from cover models and toward the readers. In 2012, RT did not have a Cover Model pageant and while there were cover models roaming the halls, the overt sexuality of past conferences was not present.

This is not to say that all readers are happy with this change. Some vocal readers expressed unhappiness at the lack of eye candy and the disappearance of the Mangeant, as it is fondly referred to by some of us. (I think Heather Osborn may have named it) I overheard one reader exclaim to a friend after having her picture taken with a cover model that “it made her conference.”

You can’t really have an increased YA celebration and mantitty all over the place and thus I believe that in choosing to foster young readers, RT is making the absolute right decision as to the direction of their conference. 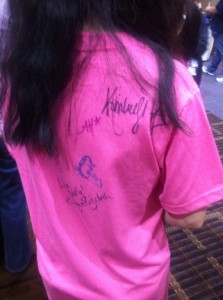 During the immense signing, RT set up Teen Alley. It was mobbed during the signing. There were groups of girls, some who came with their mothers and others who came with library groups. One library group had printed “Author Prom” t shirts for their readers. The readers wore the shirts and had the authors sign the t shirts. What a marvelous idea.

Even though the conference price is high, the hotels they choose are reasonably priced, some meals are provided, and a ton of swag (books and other items like bookmarks, chapstick, pens). However, I believe the most valuable thing that the readers get from this is the opportunity to meet with authors. The authors will sit in the bar and the lobby and are very receptive to readers coming up to them and engaging in them. Authors, I’ve learned, get a thrill from being recognized and acknowledged by readers. Some authors, like Beth Kery aka Bethany Kane, were anxious to meet other authors like Anne Rice. (I’m not sure if Beth ever got her Anne Rice meeting but I did hear that Anne Rice was in the elevator at some point!)

The Hyatt was really a great conference hotel. The staff was super nice and they put out signs that celebrated romance readers and had no snark! (At least none that I saw). Whether it was Hyatt or RT, there was a big dry erase board where a new question was posted every day and people were invited to write in their answers. I attended a couple of sessions. One was the reader roundtable that Sarah and I facilitated. It ended up being a lot of authors wanting to hear from readers (dear readers, we want to hear from you!!) but listening to authors talk about their favorite books was really fun. MaryJanice Davidson confessed that she just started reading George RR Martin’s series and that she was totally hooked.

There were some RT scandals. What would RT be without scandals? J.R. Ward instigated #peegate. Apparently she twice used the restroom on Friday and both times had her bodyguards prevent any one from entering. Dear everyone there, no one but the hotel staff has the right to bar you from the restroom, particulary if you were a paying customer. Of other interest to Ward readers, she intimated in her panel that Butch and Vishous are regularly having sex. I guess that is okay for Jane, after all, she is just a ghost but what about poor Marissa? (Edited to add a link to someone who took more copious notes)

Q: We haven’t seen much of Butch and V lately–
JR: interrupts They’ve been seeing plenty of each other!
Q: — will we ever see any of that on the page?
JR: No.. [paraphrased]... I will give hints about it and talk about it verbally, but it won’t be on the page… because too many people would hate it.  sotto voce Butch is getting it regularly. 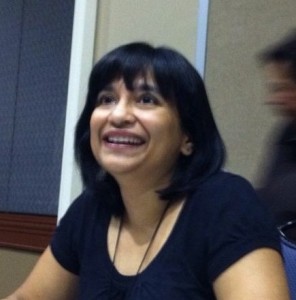 I tried to pump Nalini Singh for details about the ghost but she refused to give it up. Actually, she seemed close to being broken on Friday night (I had worked her over good for three days) and admitted that she wanted to tell but was afraid that if she spilled the beans to even one person that the floodgates would be breached and she couldn’t keep it a secret anymore. I told her that I knew it was Kaleb and in the event that she choose someone else to be the ghost, I would need a legal brief justifying her alternative choice. Someone is going to have to write a lot of fan fiction for me if the ghost ends up being someone else. Nalini is a very good sport. She had dinner with Angela James and Sarah Wendell and I. I think Angie and I spent about a good hour complaining about certain aspects of Nalini’s books. (Angie and I are not fans of reincarnation stories) Nalini took everything with really good humor. Perhaps it helps that Angie and I are real fans of both series but as I look back at that dinner, I am pretty amazed at how gracious Nalini was with Angie and I. 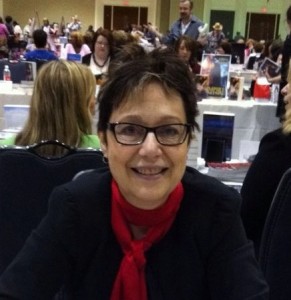 One of my highlights and more embarassing moments came right before the booksigning. I had slipped in to take photos which I have uploaded to the new Dear Author flickr account. Loretta Chase was there. I told her that when I was in Korea, I went to a bookstore and there was Lord of Scoundrels in Korean. I wished I had brought it with me. I shared with her repeatedly, in a rush of garbled words, how much I appreciated her books and loved her writing. I also told her that no matter what grade we gave her on the blog, we still appreciated her contribution to the genre. I think I may have said that three or four times. It was embarassing. I’m glad few people were there to see me.

RT has made Saturday into a reader event. There are four or five sessions going on at one time so that there is always something that will fit a readers’ particular interest. I’m not certain what readers want out of conferences but if it is to meet with other readers and authors in an informal but engaging setting, then RT is likely to satisfy.

→ Jane
Previous article: Antitrust Primer for the Publishing Price Fixing Lawsuit
Next Post: REVIEW: Once Upon a Dream by Jennifer Archer