Thanks again to Dear Author for giving me this opportunity to let you know about some of our terrific upcoming titles. As always, there are too many great books for me to mention all of them, so you can look at our site (http://us.penguingroup.com/static/pages/specialinterests/scifi/index.html) to see everything we publish. 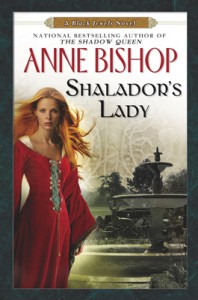 I've said it before and I'll say it again-‘Anne Bishop is really special. Her Black Jewels novels are intense and sensual and both her anti-heroes and the way she turns fantasy tropes on their heads made her books groundbreaking when they first came out. SHALADOR'S LADY continues the story of Lady Cassidy, the Rose-Jeweled Queen who is striving to restore her land (and struggling to believe in herself). If you've read Anne Bishop before, then you know it's unusual for her to feature a character with a lighter-colored (and less powerful) jewel. In both this book and the previous story about Lady Cassidy, THE SHADOW QUEEN, I love how Anne is exploring what it really means to be a Queen (a witch who rules the Blood, and is considered to be the land's heart and the Blood's moral center). It's not just about how much fire power you've got. 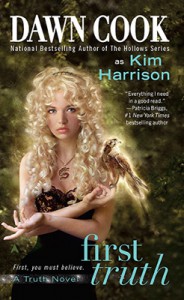 Dawn is most known for the terrific urban fantasy she writes under the name Kim Harrison (I'm looking forward to digging into BLACK MAGIC SANCTION myself). So not as many people are aware of the wonderful traditional fantasy novels she wrote as Dawn Cook. We are reissuing them with beautiful new covers, and FIRST TRUTH is kicking it off. It's a romantic fantasy, about Alissa, a young woman who never believed in magic. But her mother insists she's inherited her father's magical ability and must go to the Hold-‘the only place her talents can be trained. As she learns to use her powers, she also finds love with a wandering musician. The style of these books is necessarily different from the Kim Harrison novels, but readers who also enjoy traditional fantasy should have a great time. There are three more books in the Truth series, and they will be released in May, July, and September. 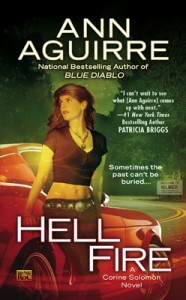 This is the latest in Ann's Corine Solomon books, a terrific urban fantasy series about a woman who can touch an object and know its history. Corine's voice is tremendous and whether the book takes place in the southwest (BLUE DIABLO) or the steamy south, the setting comes alive. In HELL FIRE, Corine leaves Texas to go back home to Kilmer, Georgia, in order to discover the truth behind her mother's death and the origins of her "gift". Her ex-boyfriend Chance (who doesn't want to be her "ex") is there as well, having promised to lend his particularly supernatural brand of luck to Corine's search. (Fun fact: all the book titles in this series are tequila cocktails. I'm not a drinker, but the internet is an amazing research tool!) 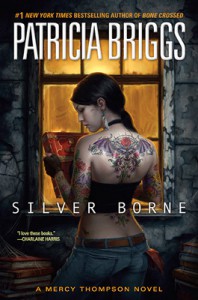 I am so excited for you to read the next Mercy Thompson novel! If you're new to the series, Mercy is a car mechanic (and shapeshifter). She lives in a world of vampires, werewolves, fae and witches, and while humans are aware preternatural beings exist ever since some of the more "harmless" fae came out, what humans know is only the tip of the iceberg. It's so hard to know how much to tell you about the book itself since I don't want to spoil anyone. I'll just say that SILVER BORNE starts off with Mercy getting the message that she needs to return a book of fae lore to the person she borrowed it from, but things quickly become more complicated when Mercy finds out her werewolf friend, Samuel, is in trouble and she needs to go to the hospital where he works to help him. There are some scenes in this one between Mercy and Adam, her mate, that made my heart skip a beat, they were so emotionally intense. This is a wonderful series, with characters who grow and change, and a world that keeps getting richer with each book. 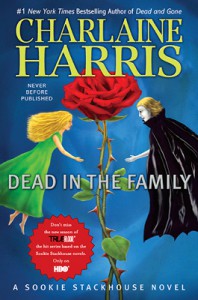 DEAD IN THE FAMILY by Charlaine Harris

DEAD IN THE FAMILY is the much anticipated new novel in Charlaine's Sookie Stackhouse series, the basis for the HBO series TRUE BLOOD. The Sookie books have a lot of heart and thanks to you, wonderful readers, they've come a long way since the first in the series, DEAD UNTIL DARK, was published in 2001 as an Ace original paperback. Being an Eric fan, here's the tidbit from the cover copy of DEAD IN THE FAMILY that caught my attention:

Sookie is hurt and she's mad. Just about the only bright spot in her life-‘besides the fact that she is, after all, still alive-‘is the love she thinks she feels for vampire Eric Northman, who is under scrutiny by the new vampire king because of their relationship. 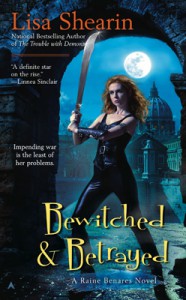 If you think "sexy goblin" is a misnomer, than you've never read Lisa Shearin. Lisa writes traditional fantasy with a modern attitude, and the story is told in the sassy first person voice of Raine Benares, an elf sorceress who got stuck with an artifact of unimaginable power (that unfortunately eats souls). Whoever controls Raine, controls the artifact, and all this constant running and fighting to get away from the people after her is really putting a damper on her life. On top of that she's got an elf paladin and a goblin mage vying for her affections. There are significant relationship developments in this one-‘you won't want to miss it! 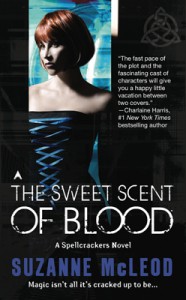 THE SWEET SCENT OF BLOOD by Suzanne McLeod

First in a brand-new urban fantasy series, this is about Genevieve Taylor, a sidhe-‘one of the noble fae-‘and she's unusual even in a London where celebrity vampires, eccentric goblins, and scheming lesser fax mix freely with humanity. She's also a rising star at Spellcrackers.com, where she finds the "M" in magic-‘which can mean anything from mischief to malice to murder. 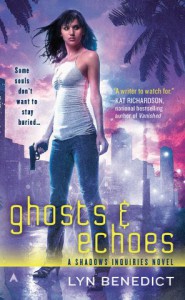 This is the next book about Sylvie Lightner, an unlicensed PI working out of Miami who specializes in cases involving the magicus mundi, i.e. things that go bump in the night. Sylvie wants an easy case this time, something straightforward, so she agrees to investigate a series of thefts in her area-‘but nothing is as simple as it seems. The plot involves Hands of Glory, Sylvie's teenage sister, and coming back from the dead, and it's fantastic. (I personally find hands of glory incredibly creepy, and I was getting chills, in a good way.) This is an excellent series, well worth a try if you like your urban fantasy on the dark side.

Anne Sowards is an executive editor at Penguin Group (USA) Inc., where she primarily acquires and edits fantasy and science fiction for the Ace and Roc imprints. Some of the great authors she works with include Jim Butcher, Patricia Briggs, Anne Bishop, Ilona Andrews, Karen Chance, Jack Campbell, and Rob Thurman. When she’s not reading, she listens to Chinese rap and spends way too much time playing video games. Follow her at http://twitter.com/AnneSowards.

We are giving away:

TO WIN:   Leave a comment listing the top two books you would want AND tell us your favorite Ace/Roc book (in other words, build up our to be read list)