This post is a sticky meaning that it remains at the top of the site. Scroll down for new content.

ISony has a new social media site for booklovers called Words Move Me. As a way to promote this, Sony has approached a number of bloggers to share their reading experiences with others and have provided them a Sony Reader to the readership. We actually get two of them, one to give away and one to keep. Because I already have a Sony Reader, I’m going to give away both Sony Readers. This is the Sony Reader Pocket Edition. 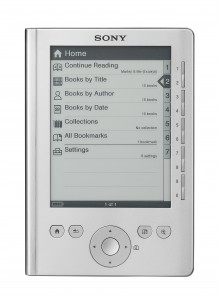 I was given a tester to try out for a couple of weeks and I was pleasantly surprised by the size. It’s smaller but I liked how portable it is. The screen is nice and clear and I thought the bottom layout of the buttons was very intuitive. We have a pink (rose) one and a silver one to giveaway.

I will announce the winner on Monday and the device will be mailed Priority Mail to get to you before Christmas.

Shipping note:   I’ll send these overseas, but with the following provisions: any shipping in excess of $12.00 has to be paid for by the winner, along with any additional fees.

I’ll be adding your favorite quotes to my widget. Thanks guys!