UPDATE:   This contest is now closed.

You all have shown such a strong interest in the Berkley/Ace/Roc giveaways that other publishers are beginning to notice. Pocket wanted to do a fall preview and share with you a few of their books coming out this fall and they are offering up 5 copies of each of the following books. Read the summaries and at the bottom find out how to participate in this giveaway. 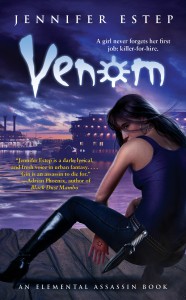 Click  here to read an Excerpt and to learn more about the Author or visit simonandschuster.com

It’s hard to be a badass assassin when a giant is beating the crap out of you. Luckily, I never let pride get in the way of my work. My current mission is personal: annihilate Mab Monroe, the Fire elemental who murdered my family. Which means protecting my identity, even if I have to conceal my powerful Stone and Ice magic when I need it most. To the public, I’m Gin Blanco, owner of Ashland’s best barbecue joint. To my friends, I’m the Spider, retired assassin. I still do favors on the side. Like ridding a vampire friend of her oversized stalker-‘Mab’s right-hand goon who almost got me dead with his massive fists. At least irresistible Owen Grayson is on my side. The man knows too much about me, but I’ll take my chances. Then there’s Detective Bria Coolidge, one of Ashland’s finest. Until recently, I thought my baby sister was dead. She probably thinks the same about me. Little does she know, I’m a cold-blooded killer . . . who is about to save her life. 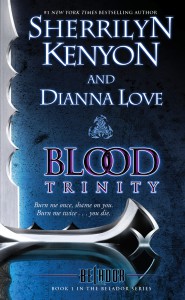 By: Sherrilyn Kenyon and Dianna Love

Click on the link to learn more or visit simonandschuster.com!!

Atlanta has become the battlefield between human and demon. All her life, Evalle Kincaid has walked the line between the two. Her origins unknown, she’s on a quest to learn more about her past . . . and her future.

When a demon claims a young woman in a terrifying attack and there’s no one else to blame, Evalle comes under suspicion. Now she’s on a deadly quest for her own survival. Through the sordid underground of an alternate Atlanta where nothing is as it seems to the front lines of the city, where her former allies have joined forces to hunt her, Evalle must prove her innocence or pay the ultimate price.

But saving herself is the least of her problems if she doesn’t stop the coming apocalypse. The clock is ticking and Atlanta is about to catch fire. . . . 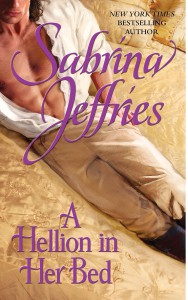 A Hellion in Her Bed

Click here to read  an Excerpt and to learn more about the Author or visit simonandschuster.com

Furious at his grandmother’s ultimatum to marry or lose his inheritance, Lord Jarret Sharpe wagers his luck-‘and his heart-‘at the card table against a most unlikely opponent.

Mired in scandal after his parents’ mysterious deaths, notorious gambler Lord Jarret Sharpe agrees to tamely run the family brewery for a year if his Machiavellian grandmother rescinds her ultimatum that he marry. But the gambler in him can’t resist when beguiling Annabel Lake proposes a wager. If she wins their card game, he must help save her family’s foundering brewery. But if he wins, she must spend a night in his bed. The outcome sets off a chain of events that threatens to destroy all his plans . . . and unveils the secret Annabel has held for so long. When Jarret discovers the darker reason behind her wager, he forces her into another one-‘and this time he intends to win not just her body, but her heart. 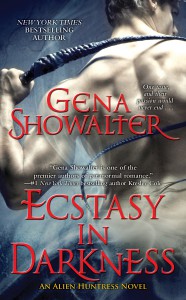 New York Times bestselling sensation Gena Showalter enthralls with a dark, tantalizing world of humans, otherworlders, powers beyond imagining, and a seductive vampire undone by his insatiable hunger for one woman. . . .

Growing up poor on New Chicago’s meanest streets, Ava Sans had two options: be the predator or be the prey. No contest. Now, working for Alien Investigation and Removal, she’s been ordered to capture the biggest, baddest warrior of all-‘a vampire too beautiful to be real, with the abilityto manipulate time. Once the leader of the entire vampire army, McKell has been deemed savage and unstable, spurned even by his own kind.

To McKell, humans should be nothing more than sustenance. Yet the petite, golden-skinned Ava is a fascinating contradiction-‘vicious yet witty, strong yet vulnerable, lethal but fiercely loyal. Against his better judgment, McKell craves that loyalty, and much more. When the chase leads to seduction, McKell and Ava will race to discover the truth about his past. But the answers will come at a price, even for a woman who thought she had nothing left to lose. . . . 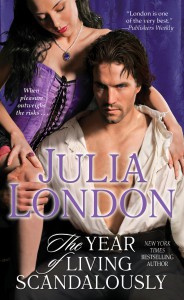 In 1792, the village of Hadley Green executed a man for stealing the Countess of Ashwood’s historic jewels. Fifteen years later, questions still linger. Was it a crime of greed-‘or of passion?

When Declan O’Connor, Earl of Donnelly, arrives at Hadley Green to meet with Lily Boudine, the new countess of Ashwood, he knows instantly that the lovely woman who welcomes him is not who she pretends to be. In an attempt to avoid an unwanted marriage, Keira Hannigan has assumed her cousin’s identity and is staying at the estate while Lily is abroad. When Declan threatens to expose her, Keira convinces him to guard her secret, then enlists him in her investigation of the missing jewels, for she now believes an innocent man was hanged.

Unable to deny the beautiful, exasperating Keira-‘or their simmering passion-‘Declan reluctantly agrees. But neither is prepared for the dangerous stranger who threatens to reveal Keira’s lies . . . and Declan knows he must protect Keira at all costs, for she is the woman who now owns his heart.

We’ve got 25 books to giveaway. If you are interested, leave a comment and tell us one book you plan to read this fall (and we should too).