Welcome to the fifth stop on the Mockingjay 13 District Blog Tour!

We are District 5, home to hungry fox-faced tributes who steal poisoned berries from star-crossed lovers and drunken tributes who get speared by fishnet-wearing hotties from District 4. We’re a very mysterious district. No one likes talking about us and our tributes are, at best, an illustration of Things Not To Do While In The Arena.

But enough about District 5. Let’s talk about another aspect of the books, one that’s become as contentious and exciting as the plot to overthrow the Capitol: the romance.

(Hey, we’re a romance blog. Don’t tell us you didn’t see this coming.)

From the very beginning, Katniss has been torn between two very viable love interests. Well, maybe “torn” isn’t the right word for it. Avoidant might be more accurate. But to be fair, she does have a lot on her plate. As the person responsible for humiliating the Capitol in front of millions of people, she might as well have a bull’s eye painted on her back. You can’t blame a girl for not wanting to think about romance when she has other things to worry about. Like staying alive. 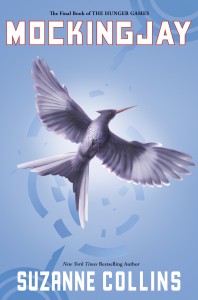 Thankfully, us Hunger Games fan don’t have that same problem. So today at Dear Author, let’s take a look at all the potential romantic relationships for Katniss within the Hunger Games trilogy. From the likely to the impossible, from the believable to the completely out there, we’ve got it all covered.

Peeta Mellark
While their star-crossed lover routine within the arena may have been nothing more than an act for Katniss, we soon discover the same cannot said for her fellow Tribute. In love with Katniss ever since he first heard her sing when they were mere children, Peeta has proven time and time again that he would do anything for Katniss, even die for her. When Haymitch’s name was drawn for the 75th reaping, Peeta didn’t even hesitate to take his place. Now that’s dedication. From a romance novel perspective, Peeta’s the omega male — he’s helpful and pleasant and never quite as exciting as the alpha male. He gets brownie points for being the son of a baker, since Katniss will always have dinner if she hooks up with him.

Gale Hawthorne
The other of Katniss’s two most likely suitors, Gale and Katniss have been friends ever since both their fathers died tragically in the coal mines. One could even say they are best friends, and who doesn’t love a good friends to lovers story? Out of everyone, Gale probably knows Katniss best. They hunt illegally together. They look out for each other’s families. And let’s not forget, it’s a certain kiss between Katniss and Gale that kicks off the events of Catching Fire. Gale is definitely a snarly, mysterious bad boy hero. You know he’s been wounded in the past and is just waiting for the right woman to turn him around.

Haymitch Abernathy
What? The age difference is too great for this May/December romance? But who’s to say it couldn’t happen? The announcement that the tributes for the 75th games would be drawn from the existing pool of victors showed us they react exactly the same: panic and get ridiculously drunk. Even Peeta says they’re much too alike and who’s to say that shared experience couldn’t lead to something more? Plus, old guys have lots of experience… or something.

Madge Undersee
As the Mayor’s daughter, Madge has no doubt enjoyed a steady supply of strawberries sold to her family by Katniss’s illegal foraging. We don’t see much interaction in the books but it’s safe to assume Madge is the closest thing to a female friend Katniss has in District 12. And let’s not forget who gave Katniss that mockingjay pin which would become her emblem and the symbol of the rebellion. Hey, this could be another twist on friends to lovers!

Cinna
When we last saw Cinna, he was getting assaulted by Capitol thugs but until there’s a body, let’s assume the best case scenario and he’s still alive. Of all the residents of the Capitol, Cinna is the least flamboyant but Katniss wouldn’t be the Girl on Fire without his fantastic designs. Suffice it to say, Cinna was the one Capitol citizen who put Katniss most at ease and their relationship is the perfect example of quiet understanding and companionship. Not to mention that Katniss’s wedding dress would be FIERCE.

Finnick Odair
How could we possibly leave out the heartbreaker from District 4? From their first meeting before the parade to their uneasy alliance during the 75th games, their interactions have been anything but boring. (He gets the Dear Author vote due to the loincloth and trident.)

So which team are you on?

And to celebrate the release of Mockingjay, the third and final book of the Hunger Games trilogy, we are giving away a unique, one of a kind messenger bag embroidered with the Mockingjay emblem. Cool, huh? To enter the drawing, leave a comment mentioning your favorite match for Katniss by August 18. Open to U.S. addresses only. (Sorry, international fans! These were the rules given to us.) Good luck and may the odds ever be in your favor.

(For more information about the Hunger Games trilogy, visit the official Facebook page, and don’t forget to visit Hey Lady, the next stop on the blog tour!)