JOINT REVIEW: Kiss of Snow by Nalini Singh (and Giveaway) 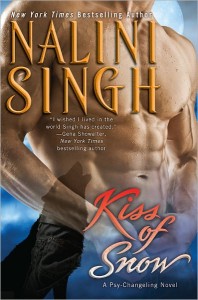 UPDATE: We’ve decouple the review from the giveaway because this is a book so many want to talk about. The review will be reposted on Monday in a new and separate post.

The winners have all been emailed.

NOTE FROM JANE: We have 8 copies of the hardcover debut from a Dear Author favorite, Nalini Singh. These 8 copies we will give away on Sunday to a random commenter to this post. This book engendered such a strong response that Janine and Shuzluva decided to do a joint review. There may be some spoilers in this review and if you don’t want to be spoiled, just skip to the comments section and leave a comment as to why you want to read Kiss of Snow. I’ll tell you my reason. Because Singh delivered everything she promised when Hawke and Sienna were first introduced in the first book in this series, Slave to Sensation. I’ve told anyone who asked that yes, this book is worth the hardcover price.