I am promoting my latest Regency romance: Lord Trowbridge’s Angel. This is my favorite of the Regencies I have written because of its Truly Original Heroine and the hero my readers tell me is To Die For.  Amazon link. 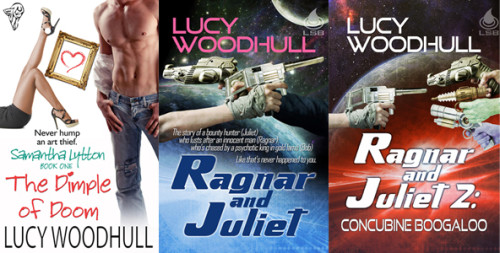 I like my romance with a big, heaping side of funny, and I’m giving away a digital copy of all three of my romantic comedies to the winner!

THE DIMPLE OF DOOM (contemporary):  Failed actress Samantha Lytton is getting along just fine in her lonely little life when a charming criminal called Sam or Nate or maybe even Richmond kisses her, square dances most provocatively, opens his not-so-wicked heart, and gets her in trouble with not one, but two international art theft rings as well as the LAPD. She’s either gonna end up in jail or famous. Maybe both.

RAGNAR AND JULIET & sequel RAGNAR AND JULIET 2: CONCUBINE BOOGALOO (sci-fi):  Juliet is a bounty hunter with a penchant for pie, himbos, and shopping at Sluts ‘R’ Us. Ragnar is a sweet, hunky alien dude who’s wanted by one seriously assy emperor. She’s totally going to turn him over to King Jerkface… if she can stop falling for him. And his surprisingly-sexy tail. Or maybe she’ll just overthrow the government of a planet in order to rescue hundreds of unwilling concubines. Yeah — definitely the latter. 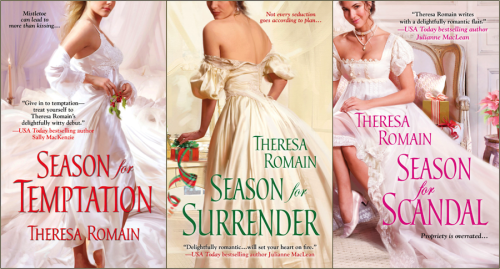 The Regency-set holiday romances of the Season series have been called “hilarious and utterly adorable” by Courtney Milan, “Regency romance at its best” by RT Book Reviews, and “a holiday charmer” by Library Journal. And in this giveaway, three entrants will each win ALL THREE Season books to date, including an advance copy of SEASON FOR SCANDAL, out in October 2013.
***
Each prize will include signed print copies of:

SEASON FOR TEMPTATION (Season book 1): In which an honorable viscount makes a sensible engagement…then falls into a very unsuitable passion.

SEASON FOR SCANDAL (Season book 3–coming October 2013!): Concerning a gambling debt and a marriage of convenience–which, with the addition of a few family secrets, becomes a marriage in trouble.
***
For excerpts, news, and information about all of Theresa Romain’s historical romances, please visit http://theresaromain.com. You can also find Theresa on Facebook (http://www.facebook.com/AuthorTheresaRomain) and Twitter (@TheresaRomain).