Giveaway for The Chocolate Rose by Laura Florand

I have a trait which I think is far from unique among writers, in that I write stories for the same reason readers read them—to escape. Not from anything bad, I just like to sink into them. And often I need to escape from my own stories.

So, for example, I have half a dozen novels set in seventeenth-century France and England that I dabble with from time to time, because I just need and enjoy that creative outlet. One that has no set goal. One that’s just for me, just play. I’ll get stuck somewhere in my “main book”, the one I’ve committed myself to finishing (whether to myself or for a publisher), and I’ll go play with another one for a while. Some of those books will never be finished, but every single one that is finished started off, at some point, as my play time.

THE CHOCOLATE HEART, which comes out in December from Kensington, is a very dark and angsty book compared to my usual ones. I weave a Hades-Persephone theme throughout, where Paris is hell (I know! I know! I’m hoping my Francophile readers forgive me), and the hero is a very tightly self-contained, uber-controlled, intense, driven man. And whenever I started feeling too stuck in this novel and couldn’t figure out my way forward, I would go work on another one. When you look at those two books now, you would almost describe them as the yin/yang of each other. The book I would work on became this one, THE CHOCOLATE ROSE, which is a bright, vivid, summer-in-Provence story, with a hero who just cannot contain himself for anything in the world, who is all out there, all the time.

By the time I finished THE CHOCOLATE HEART, I was dying to give THE CHOCOLATE ROSE my full attention and plunge into its world and particularly the hero, Gabriel Delange. He was a vividly compelling character for me, with his bright, intense energy. He redefines joie de vivre. 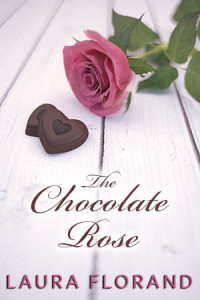 Now the thing is, I didn’t have any contract for THE CHOCOLATE ROSE at that time, and this is where it is so gloriously exciting to be a writer at this point in publishing history, because—who cared? I was going to write it, and see what it became, and then I would do whatever seemed best with it—let my NY publisher put it out, find another publisher, put it out myself. If it was good enough for me to be willing to publish it (and I am a severe self-filterer), then there was no question of it being “wasted”. Only a few years ago, authors would automatically think limiting thoughts when they came up with ideas: “Oh, but this doesn’t ‘fit’ with any publisher so I’m wasting my time.” They had to. Because that was the cage they wrote in.

That world of crushed ideas is over. We are done with it. If a story drives a writer, then it is never a waste of time to finish it. That’s one of the most beautiful things about the indie/self-publishing revolution. You have no idea how many great stories used to get shelved half-written or snuffed out of existence while they were still just flickering in the author’s head.

In THE CHOCOLATE ROSE’s original “finished” form, about four or five drafts in, it was about 60,000 words, only about 20% longer than a Harlequin Presents, and I worried that attempting to lengthen it would bog this bright story down. And honestly, if my heroine resisted Gabriel too much longer I would lose all respect for her. I was quite attached to him! THE CHOCOLATE ROSE did eventually grew another 20% longer in rewrites, as Daniel and Léa from TURNING UP THE HEAT became secondary characters and helped me work with the heroine Jolie’s worries more. But I didn’t know that would happen at the time.

So by the summer of last year, I had already begun to think more and more seriously about publishing it myself. You would have to be living on a deserted island not to be aware of the changes in the publishing world.

Still, Kensington had an option on my next book, so when THE CHOCOLATE ROSE was ready, around Thanksgiving, I sent it to my editor, saying, essentially, “Surprise! I don’t really think this is the best fit for Kensington, with the length, but legally need to respect the option clause, and anyway, it’s a Chocolate book, and I’ve been doing the Chocolate books with you.”

I was surprised by how interested they were in it. I really thought that discussion would be an easy, “Yes, you’re right, this is too short for us, let’s talk about your other next book, that Rose trilogy we said we were interested in.”

But my editor really liked THE CHOCOLATE ROSE, or was kind enough to say so, so we spent some time discussing options, of which the most tempting was that they bring it out in mass market paperback. All my books so far in my career have been in trade, and I would really like to see some mass markets on the shelves. I think trade paperbacks, as much as I love the look of them, make for a very high price barrier when readers are hesitating about trying a new author.

But, despite the mass market temptation, the more I thought about it, the more I just had to do it myself. Partly, it was just curiosity. I feel about publishing these days about the way you might feel on the first page of Oh, the Places You’ll Go! There are so many paths, and I get a huge creative kick out of exploring new paths. I’m a world traveler by nature, the person who spent most of her twenties abandoning stability regularly to go live in other countries. And it’s not like I’m chopping my way through virgin terrain here—quite a few trail-blazers have gone before me and proven what a valuable path self-publishing is to take.

Plus, besides my own enjoyment in new ventures, there were some other advantages: I could release it a 12-18 months earlier than I would be able to with a NY publisher, I love having absolute control of my work, I like choosing covers, I want to know my sales figures in an up-to-the-minute way, and I very much think it’s a good business decision to gather more information about self-publishing. And it’s not as if they were offering me millions of dollars I would be insane to refuse, right? I was pretty sure I could make more than they were offering in a few weeks, and that if I couldn’t, I needed to find that out, too.

So we agreed not to join forces on this one and went on to talk about some other books, a sixth Chocolate book and the Rosier family trilogy to which THE CHOCOLATE ROSE is a prequel. We’re still talking about those now, and I’m still gathering information from THE CHOCOLATE ROSE reception itself, so I can’t say more about what publishing road I might go down for those.

I do know that having the option of self-publishing has been an incredibly empowering one for me. I feel freer, stronger, more inspired, and all of those things lead to better writing, because writing stays an adventure.

And for authors who ask me how it is my publisher “let me” do this, or similar questions, I really, really want to offer every one of us a copy of Oh, the Places You’ll Go! Because I think that would sum up my attitude toward the author in the current world of publishing entirely. But I’m happy to answer any questions I can, too, although the amount of authorial experience lurking on this site far, far exceeds mine.

What about readers? As a reader, are you happier or less happy because of the growth of self-publishing?

And how many books do you think I can get away with about French chocolate before someone realizes how unfair it is to pay me to do that kind of research?

Top chef Gabriel Delange never forgave his old nemesis Pierre Manon for all the other chef had cost him.

And he most certainly couldn’t stand the sight of his own most famous dessert, the legendary Rose, claimed as Pierre’s own on the cover of his new cookbook.

But even Gabriel could hardly go through with a lawsuit when he learned the older chef had just had a stroke. Especially not when Pierre had one very cute daughter willing to be Gabriel’s victim instead.

As a child, Jolie Manon had seen her family torn apart by her top chef father’s obsession with his work. As a food writer, she might be fascinated with a chef’s work, but she knew how to guard her heart. She would never allow another chef into her life.

Unless he blackmailed her into it…

Welcome to the heat and sun of Provence, where jasmine and roses climb up old colored walls, where fountains play in ancient stone villages, and where even a beast can prove he is a prince at heart