Here we are at the conclusion of the Guardian series. Through this series we’ve seen angels fall, vampires created, and demons fall in love. We’ve waited for a long time for the conclusion of how Michael, the leader of the Guardians, will reclaim his soul from hell and finally close the gates that Lucifer and others want open between the otherworlds and earth.

I saw on Goodreads, one reader post a picture in anticipation of the final book with the words “Come to me.”  She took it down but it was a squirrel with outstretched arms. It perfectly captured my feelings as well. 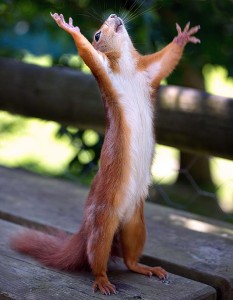 When I sat down to read it, I had some sense of foreboding. So much build up, how could it ever deliver? But it did, in spades. What was strange was although this was a really long book (over 200,000 words, I think) it didn’t feel long and at the last page, I felt like I could have read another 100,000 words. I wasn’t ready to leave this world and all the beings I had come to care about.

The problem with introducing new readers to this series is that it takes an investment of time and money. We can’t give you time, but we can ameliorate the money aspect in two ways. First, Meljean has a “Story So Far” primer which provides a summary of events in each book. (I love this and wish other authors would do this) You can read the summaries and then buy Book 8, Guardian Demon, when it releases next week. Or, you can enter to win the contest for the entire backlist, signed by Meljean Brook. Or you can do both. 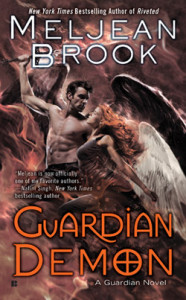 Is this a book I’d recommend you read? Yes, but not without having read the primer first. Or set aside some time to read the entire series. I wouldn’t jump into Guardian Demon without having read something about the events leading up to it because even though Meljean does a fair job of providing backstory, it really is the conclusion to a long standing series.