Giveaway: 15 ARC copies of Rumor Has It by Jill Shalvis 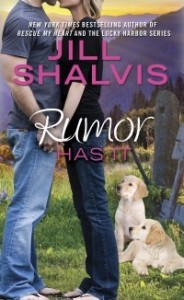 I’ve read this and really liked the heroine. She’s taking care of her entire family – her recovering alcoholic father; her teenage sister who dresses inappropriately is always unhappy; and her younger brother who reminded me a tiny bit of Charles Wallace in A Wrinkle in Time. Her character arc was learning to let go of her family and all her safe harbors and take a risk. The risk wasn’t on Griffin Reid whose storyline was a little less interesting to me, but on herself. I think Shalvis fans will enjoy this book. You do not have to read the previous Animal Magnetism books to understand and enjoy this story.

He’ll help unleash the new woman in her…

Special Ops soldier Griffin Reid doesn’t exactly have happy memories of growing up in Sunshine, Idaho. He’s only come back to recover from a war injury, and while he refuses to admit he’s in a weakened state, he finds comfort in the last person he’d expect.

Kate Evans teaches fourth grade science in Sunshine, the place she’s always called home. Dreaming of graduate school and a happily-ever-after, she’s desperate to break out of the monotony of Sunshine. Luckily, a certain sexy man has just come back into her life.

To Griffin, Kate as always been his little sister’s friend, but now he’s finding her to be so much more. As both attempt to forge their paths, they must decide if their passionate connection can turn into something lasting…