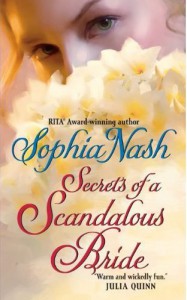 This contest is now closed.

Avon contacted me and wanted to give away Advanced Copies of Sophia Nash’s Secrets of a Scandalous Bride. How could I stand in the way of free book goodness?

Sophia Nash's Widows Club – SECRETS OF A SCANDALOUS BRIDE – is one of Michelle Buonfiglio’s Top 10 New Year reads and Avon is celebrating this pick by offering five Dear Author readers a chance to win an ARC. To win, leave a comment below with the answer to this question: Where does the first scene of Secrets of a Scandalous Bride open? (Get a hint at http://www.sophianash.com/books/scandalous.htm.)

This contest is open to US residents only and will be closed on Tuesday, February 9, at 10:00 pm CST.

TO ENTER: EMAIL ME THE ANSWER: jane @ dearauthor.com (without the spaces)