Wrecked is a friends to lovers story from author Shiloh Walker.  Kati  is recommending this book for April and when the author contacted me about doing an ARC giveaway, it seemed like serendipity. 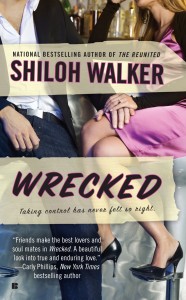 Last March, I was in Tucson, Arizona for the Tucson Festival of Books.  We were at this cool little bookstore on 4th Avenue with a couple of bloggers who’d met up with us (heya, Bookpushers!) and I walked past this book…Wreck This Journal.  I saw it out of the corner of my eye, glanced at it. Kept walking…then I stopped and went back. Stared at it.

There’s this girl, she’s out to wreck her life.  Why?  Because her entire life, she’s tried to control everything.  Why? Because when she was a kid, her life was chaos and she had no control.  Why?

All these little bits and pieces were little coming together, clear as day, in my head.

So, after I paid for the journal—of course I had to buy a copy—I was walking outside, still dealing with this book coming together in my head, I had this picture of him. Zach. The hero.  He’s the heroine’s best friends and they’ve been friends for forever.  She’s out to wreck her life, and he’s out to remake it. Because he’s been in love with her…forever.

The next day, I was talking to Helenkay Dimon and the idea is all but exploding out of me.

There’s this guy, and he’s a tattoo artist, the heroine has this crazy plan to wreck her life after her fiancé dumps her.  She’s going to get a tattoo—and the hero is doing the tattoo, cuz he’s a tattoo artist.  So she’s getting a tattoo and while they’re doing the tattoo and she’s trying to come to grips with how her fiancé dumped her…and she asks Zach, her best friend for forever, if he’s ever been in love.  Zach has been in love…with only one person, ever.  But he can’t tell her that, see?  Because she’s his only.  So he tries to hedge away…but she pushes and he just tells her, ‘It didn’t work out…she never seemed to notice that I was the one staring at her when she walked into the room.’

I could see all of this, clear as day.  And I hadn’t written a single word.  I asked Helenkay what she thought…and she said, “I love Zach already.”

That was pretty much me…I loved Zach, and Abby, from the get-go.

The dark brown of her eyes seemed to burn as she stared at him.

Zach was torn between just closing the distance between them and just calling this whole idea off. More than seventeen years, damn it. That’s how long he’d loved her and she’d never known.

But you’ve never told her.

Yeah, because she’d never seemed to—

Abby slid her off her stool.

Mentally, he sighed. Shoving a hand through his hair, he glanced away from her, tried to find something else to look at, focus on, think about. He’d been teasing her and pushing her as far as he figured he could go without saying outright, “I read the damn journal. If you have to have an affair, why not me?”But she wasn’t exactly following and—

Her hand touched his shoulder.

Zach and looked back her. His heart seemed to jump up into his throat as she closed the distance between them.

Everything in the world faded away as she pushed up onto her toes.

And then, as she leaned in and pressed her lips to his, Zach realized this was what it was like to have a dream actually come true. As her mouth parted under his, he was almost certain he was dying. Maybe he’d already died. Yeah. He’d been eating something and choked, died, and now he was in heaven.

Except he figured there was no way he would end up there.

So maybe Abby really was kissing him. Groaning, he reached for her and hauled her closer, pulling her to stand between his legs. With one arm wrapped around her waist, he slid his free hand up her back and tangled his hand in the crazy, soft curls of her hair. Soft as silk, just like he remembered.

And her mouth was sweet, every bit as sweet as he remembered, but there was no director, no crew, no brilliant stage lights shining down and this kiss wasn’t choreographed or scripted.

Abby was kissing him, damn it.

Real, and he was going to make the most of it.