Signet/NAL emailed me and wanted to offer up a spring preview of its April through June books and they offered to give away titles to our readership.  We’ve had a number of giveaways (and I suspect more in the future) so we are planning to run these Sunday afternoon.  Yay for free books.

Update: Why yes, I did forget about this.  Sorry folks.  Here are the winners (who have all been emailed. Please check  your spam boxes. You have until Friday 8 pm to fill out your form).

WINNERS
1) Leslee – $25 gift card to an online book e-tailer of his/her choice (as long as it’s easily obtainable) from Deidre Knight
2) Patti Silva – a $20 Starbucks gift card from Addison Fox;
3) Heather -from Laura Wright, a Mark of the Vampire Swag Bag (travel mug, tote bag, lip balm etc), a signed copy of Eternal Hunger, and a $10 Starbucks card to keep you up all night reading
4) Artemis – from Jessa Slade a pair of “Possession in Pearl” earrings inspired by the storyworld
5) Melanie Thomas – from Emma Wildes, a $10 Starbucks card, because authors know how important caffeine is to life.

Welcome to Signet Eclipse’s first (and hopefully semi-annual!) Spring into Summer romance novel preview and giveaway. We’re thrilled to have this opportunity to share the books we’re really excited about with such an active community of readers. Thanks so much to Dear Author for hosting us. Read on for quick descriptions of upcoming titles AND the chance to win free copies!

You can also follow us on Twitter @SignetEclipse for more romance novel news, book giveaways, (office gossip) and publishing tidbits. We’ve been excited about the Mark of the Vampire series ever since we first read it on submission. Whether you’ve read heaps of vampire romance already or are just coming to the subgenre, this series will have you falling in love with dangerous vampire heroes and their True Mates. But don’t take our word for it: New York Times bestselling author Nalini Singh calls the books “Dark, delicious and sinfully good.”

Nicholas Roman will do anything to stop the Eternal Order of Vampires from controlling his life and using other males from his bloodline–including the son he just discovered may exist–for their vicious reign. Only a beautiful vampire stranger can help him. But what are her true motives?

VOWED IN SHADOWS by Jessa Slade

The war between good and evil has raged for millennia, with the Marked Souls caught in the middle. Now two lost souls will tip the precarious balance…

Hooked yet? Jessa Slade is a fantastic new talent who writes powerful urban fantasy romance with demon-possessed heroes. The hero of VOWED IN SHADOWS is a former missionary, seriously wounded before he was claimed by immortality. His only hope for redemption is a fallen woman who has earned a reputation as “the Naughty Nymphette.” As you can imagine, sparks fly!

Ancient gods, demons, and Spartan warriors! Fans of mythology and paranormal romance will love Deidre’s band of immortal warrior heroes. King Leonidas has long led his fellow warriors in battle against dark forces, but his biggest fight will be for love. Just as he’s found an enduring passion with Daphne, the Oracle of Delphi, he is stripped of his immortality. Now, unless they can find a way to challenge Ares together, the lovers will be separated for eternity…. 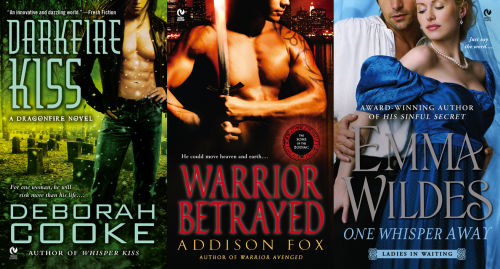 Deborah Cooke’s popular Dragonfire series features sexy shape-shifting dragon warriors. There’s definitely an allure to a strong man who’s also a powerful shapeshifter! This series has garnered critical acclaim and awards, and DARKFIRE KISS has one of our favorite heroines to date. After surviving cancer, investigative reporter Melissa Smith has resolved to live without fear. Nothing is going to stand in the way of her revenge on the man who caused her friend’s death. But it’s only when Rafferty Powell appears in her life, and the heat between them unleashes the darkfire—an awesome force of Pyr legend—that she finds herself really living.

The Sons of the Zodiac series combines ancient mythology with a band of warriors each connected to a zodiac sign.  We’ve already met the loyal Leo and deadly Scorpion warriors, and now it’s time for the Taurus warrior, Quinn Tanner, to take center stage. Security specialist Quinn is the only person who can help Montana Grant when her long-lost mother shows up spouting nonsense about Mount Olympus, immortal warriors, and long-standing curses. An angry goddess not only has put Montana’s life in danger but worldwide peace also hangs in the balance. This is the perfect series for anyone who loves fast-paced romance with alpha heroes and reading her horoscope!

ONE WHISPER AWAY by Emma Wildes

One of our sexier historical romance writers, Emma Wildes came to NAL after a wildly (pun intended) successful eBook career. Her Regencies positively sparkle with wit, charm, and romance! This book kicks off a new series about untraditional heroines who have postponed marriage until their past scandals are laid to rest. The part-Iroquois hero of this book has his hands full when a new inheritance leaves him with three half-sisters to settle. We can’t say enough about this first book in the Ladies in Waiting series. 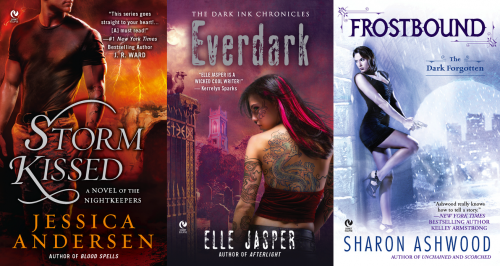 We also can’t praise Jessica Andersen’s sexy Nightkeeper world of modern magic-wielders enough! And neither can anyone else: Jessica’s received endorsements from J.R. Ward, Suzanne Brockmann, and Angela Knight. If you love to feel absorbed into complex worlds and casts of unforgettable secondary characters, this series is a perfect fit. You don’t want to miss Dez and Reese’s story. When Dez goes rogue to track down a powerful artifact, the hunt for him is intensely personal for bounty hunter Reese. He won’t get away with betraying her trust a second time…

When the art department showed us the cover concept for this series, we actually gasped. And Elle Jasper matches the gorgeous package with an engaging, fresh, first-person urban fantasy romance. EVERDARK is the second book in the Dark Ink Chronicles series featuring a tattoo artist heroine involved in a Southern vampire war, but you can jump right into the story without reading the previous book. If you love gothic stories and Marjorie M. Liu, this is the perfect summer read!

The previous book in this series (UNCHAINED) was just nominated for a RITA award, and the great reviews for The Dark Forgotten series keep piling up. This is a world where Creatures of the night (monsters, witches, vampires, demons, etc.) existed in the shadows up until the year 2000. At that time, they “came out of the crypt” on several late-night television talk shows. But the supernaturals didn’t receive a huge welcome, and equal rights have been slow in coming.

In FROSTBOUND, Lore—the hellhound that readers have been clamoring to see more of—finally gets his own story. As a snowstorm locks down the city, someone’s beheaded the wrong girl, and vampire-on-the-lam Talia Rostova thinks it was meant to be her. Now she’s the prime suspect in her own botched murder—and the prisoner of her smoking -hot hellhound neighbor.

So here’s how to enter. Simply leave a comment about your favorite spot to kick back with a book in the summer AND the book that you would most like to receive out of the titles listed in the above giveaway.

In addition, EVERYONE who comments will be entered to win one of the following prizes donated by our wonderful authors: $25 gift card to an online book e-tailer of his/her choice (as long as it’s easily obtainable) from Deidre Knight; a $20 Starbucks gift card from Addison Fox; from Laura Wright, a Mark of the Vampire Swag Bag (travel mug, tote bag, lip balm etc), a signed copy of Eternal Hunger, and a $10 Starbucks card to keep you up all night reading; from Jessa Slade a pair of “Possession in Pearl” earrings inspired by the storyworld; and finally from Emma Wildes, a $10 Starbucks card, because authors know how important caffeine is to life.

Kerry Donovan is a senior editor at Penguin Group (USA) Inc., where she acquires and edits romance, mystery, and commercial women’s fiction. Some of the authors she is thrilled to work with include Christina Dodd, JoAnn Ross, Jillian Hunter, Jessica Andersen, Deborah Cooke, Emma Wildes, Deidre Knight, Jessa Slade, and Addison Fox.