Warning: mysqli_query(): (22032/3141): Invalid JSON text in argument 1 to function json_contains: "Invalid value." at position 0. in /home/customer/www/dearauthor.com/public_html/wp-includes/class-wpdb.php on line 2187
 SOMETHING DIFFERENT: Upcoming Readalong/Discussion of The Master and Margarita
June 29, 2018

SOMETHING DIFFERENT: Upcoming Readalong/Discussion of The Master and Margarita 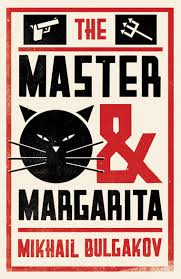 Last week I posted a deal on Mikhail Bulgakov’s 20thC classic, The Master and Margarita, and we had a lively discussion in the comments. I’ve been wanting to read it for ages and it is one of Sirius’s favorite books, so we decided that we would read it together and talk about it here at Dear Author, inviting any readers who are interested to join us. And people who’ve already read the book are of course welcome to comment as well, we’d love to hear from you.

It’s not an overly long book, but there is so much going on in it that it rewards careful and patient reading. Therefore, we thought that we would spread it out over a month, reading about 100 pages each week for four weeks. We’ll begin next Friday, July 6.

I’ve listed all these versions in case readers want to check out their library or UBS options, and also because not all of them are available in e-form at every retailer (let alone in every country). I don’t think it matters that much which ones people read, as long as they are enjoying it, and we’re all different in terms of what works for us. There is no perfect English translation, especially for Russian literature, so go with any of the above. I’ve got the P&V translation from the deals as well as the Burgin & O’Connor (in print), and I liked the sample I read of the Aplin.

I’ll let Sirius have the last word on why she loves this book so much. She convinced me ages ago, and I want her to tell you why a satire on the Soviet Union (among other things) is so worth your time.

Yesterday I was walking by the Russian bookstore near my house and of course I had to go in and check out whether they had some new arrivals. Amongst either new arrivals or the books I have not noticed before was a book by a Russian religious scholar which was titled “Master and Margarita: for the Christ or against?”  I am an impatient reader, so of course I opened to the last page and saw the conclusion that while Bulgakov deserves a monument in his honor, Voland or Master do not.

When we are done with this discussion, I will be immensely curious to hear from the readers who join us whether these characters deserve monuments. I know what my answer is, and of course I cannot convince you that the book is worth your time, but I sure hope it will be.  Till next Friday!

Feel free to comment below if you’re joining us or have questions. Happy reading, and see you in a week!