Last night, on Twitter, Alice Hoffman totally lost her shit over a review written by novelist Roberta Silman at the Boston Globe. As Ron Hogan so beautifully summed it up:

In addition to playing the Famous Writer Card on Twitter, Hoffman also played, among others, the Feminist Card (“Girls are taught to be gracious and keep their mouths shut. We don’t have to”), the Provincial Critic Card (“This is a town where a barking dog is the second top story on the news”), the Lousy Paper Card (“No wonder there is no book section in the Globe anymore – they don’t care about their readers, why should we care about them”), and the Post Your Enemy’s Email & Phone Number Online Card (encouraging fans to further validate her reaction and “tell her what u think of snarky critics”).

Gawker had some things to say about Hoffman’s inability to keep her fingers from her keyboard as well.

Popwatch found out that Hoffman once gave a negative review to author Richard Ford which lead Ford and his wife to shoot a bullet through a Hoffman book (Practical Magic maybe?).

Hoffman decided that she would delete her Twitter Account and issue a lame ass statement through her publishing house because she apparently couldn’t use Twitter to apologize directly for her actions:

Of course, I was dismayed by Roberta Silman’s review which gave away the plot of the novel, and in the heat of the moment I responded strongly and I wish I hadn’t. I’m sorry if I offended anyone. Reviewers are entitled to their opinions and that’s the name of the game in publishing. I hope my readers understand that I didn’t mean to hurt anyone and I’m truly sorry if I did."

The screencapped deleted Tweets of the raving Hoffman: 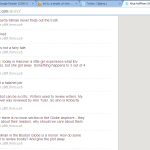 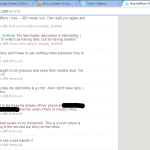 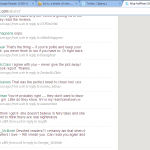 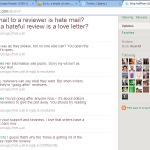 But rivaling Hoffman for douche of the day is author Alain de Botton who, in response to a negative review, wrote the following:

You have now killed my book in the United States, nothing short of that. ….I will hate you till the day I die and wish you nothing but ill will in every career move you make. I will be watching with interest and schadenfreude.