If I had a subscription to the WashPo, I’d probably cancel it today. When I first read your article , I thought it was going to be a joke. I had to read it twice to see if you just weren’t pulling my leg because, seriously, who writes this sort of thing with a straight face:

The theory that women are the dumber sex — or at least the sex that gets into more car accidents — is amply supported by neurological and standardized-testing evidence. Men’s and women’s brains not only look different, but men’s brains are bigger than women’s (even adjusting for men’s generally bigger body size). The important difference is in the parietal cortex, which is associated with space perception.

I don’t even know how many pairs of shoes I own.”

You further say that we women should just give in and recognize that we are dim and stop angsting about the male patriarchy system that seems to suppress the occasional smart woman from getting ahead.

So I don’t understand why more women don’t relax, enjoy the innate abilities most of us possess (as well as the ones fewer of us possess) and revel in the things most important to life at which nearly all of us excel: tenderness toward children and men and the weak and the ability to make a house a home. (Even I, who inherited my interior-decorating skills from my Bronx Irish paternal grandmother, whose idea of upgrading the living-room sofa was to throw a blanket over it, can make a house a home.) Then we could shriek and swoon and gossip and read chick lit to our hearts’ content and not mind the fact that way down deep, we are . . . kind of dim.

Listen, sister, your opinion that women are dimmer, dumber, and depressed mentally is supported by nothing more than vague references to undocumented scientific studies and anectodal stories of women acting stupid such as fainting at an Obama Rally and the popularity of Oprah Winfrey. The fact that those are the examples that you choose to point out shows how fallacious your position is.

I mean, can fainting at a rally or loving Oprah really compare to this: 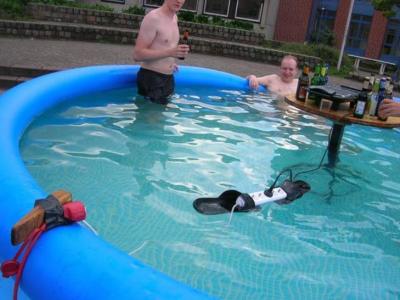 → Jane
Previous article: Dear Authors: Can We Put Some Mystery Back Into Our Relationship?
Next Post: Sunday Evening Open Thread (Author Promo Night)