Readers need to know these things so that when they go on a glom, they can easily pinpoint the books that they are missing in the series.

2. Include a relationship chart in the beginning of every book. Most books published today are series books, all somehow related to one another. It would be very helpful if, at the front of the book, all the books in a series are identified in the way in which they are related to one another and what characters appear in which books.

Why is this important? Because if we start with Meljean Brook’s Demon Bound in November 2008 and we read about Ethan and Charlie, we want to know what book they star in (Demon Night) so we can go out and buy it and every other book in the series.

3. Send publisher based emails to readers for all new releases coming from the particular house in one month. As a reviewer and blog owner, I am the recipient of summary emails from publishers which list several books that are for sale, a short summary of each and a link for “more information.” It would have been great, as a reader, to be the recipient of an email like this from each of the major publishing houses so that I would be aware of all the new releases in one email that I could print out or save to my phone.

Another correlating idea would be to text message the name of all the newly released titles much like Borders is texting coupons to readers. The text would contain just the title and author of each book released that month. I.e., a text from Avon could be:

It’s much easier for readers to manage 6-10 emails from various publishing houses than 20-50 from different authors. Readers want to know what is new and publishers have the power to provide that to them.

4. Provide an internal If You Like section at the back of the book. Readers are always searching for reads that deliver the same emotional impact as their favorite authors. In Borders, there are little shelf talkers that say “If you like author X, you may like author Y”. We’ve actually started that series here at DearAuthor. It would be great if publishers would put an insert at the back of the book that provided an internal “If You Like” so that if the reader did really enjoy Karen Rose’s Scream for Me, then Warner could tell us what other books from its house we might also enjoy such as Sharon Butcher or Susan Crandall.

It’s important, though, to think carefully on this because if you lead readers astray too many times, it will lose its effectiveness.

5. Make the covers more distinctive. I think but don’t know for certain, that Kresley Cole’s back to back releases were hampered in the success due to the similarities in the cover. The two covers were so similar that I think some believed that they had already purchased the second book. This is too bad because Cole’s latest release (which I like to refer to as Lick My Horns because I can never remember the title), was one of her best. 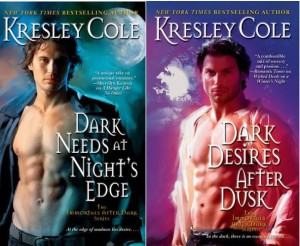 Blogland has often brought up the issue of the cover similarity. The SBs are comedically tracking Legs which appear on everything from book covers to advertisements for Vein treatment. The use of stock photography is one of the reasons of the similarities between covers today. The real danger of the use of stock photography on covers is that readers might look at the cover and think that they’ve already purchased the book or they’ve already passed it over. Neither lead to more book sales.

6. Make the titles relate to the story. I loved the title for Suzanne Enoch’s After the Kiss because it actually served to describe a moment in the book which changed the life of the characters forever. I really disliked Joanna Bourne’s title for her second book, My Lord and Spymaster because Sebastian wasn’t a spymaster. He was barely a spy. Worse yet were the titles for Kresley Cole’s last two books which were so similar that I couldn’t keep them apart. To this day, I don’t really know what the titles are to those two books. I can only remember them by characters and the fact I made up my own titles. It’s an issue that SB Sarah brought up over at her blog and it was apparent that Sarah and I weren’t the only ones having a hard time. It’s difficult to recommend books when you can’t remember their titles.

Another title concern is having series of books with different names. Mary Balogh has two regency series starting with adverbs with the letter "S": Simply and Slightly. See how easy it would be for readers to think, hey, I’ve already read that series of books before?

7. Have a website where readers can easily find out about titles, where to get them, what formats they’ll be in, when they’re being released, and how they relate to other books with a link to an excerpt. Each publisher’s website should contain the information of title, release date and book description as early as possible along with the excerpt. The publishers’ websites are generally difficult to navigate, counter intuitive, and lack substantive information. Instead, readers must go to each and every authors’ website to find out information, slowing down the process it takes to make a "buy" list. For example, at Harlequin, there is a different site for print and ebooks. There is no easy way to identify upcoming releases. At the Avon site, all the books are listed but numerous times (due to the numerous formats) so you have to scroll through a number of listings to obtain the information you want and the links are differentiated between so you don’t, at first glance, know why your screen is stuttering. It’s difficult to decipher. An example of counter-intuitivity is the Avon Romance site, a subsite of HarperCollins, and you don’t realize, until you’ve clicked, that the top bar is not for Avon Romance but for HarperCollins as a whole (i.e., the upcoming releases and new releases don’t relate to Avon Romance books). Further, there is a lack of consistency which creates issues because the top bar has "Upcoming Releases" and the sidebar has it titled "Coming Soon."

Penguin’s website is so unuseable that it is hard to know where to start. Again, it lacks intuitive features. To find the romance section, you have to click on the "Special Interest" tab. And the romance front page features books which are, well, not traditional romances. Worse, when you actually click on the subcategories, it doesn’t contain a comprehensive listing and it suffers from the same multi-listing problem that Avon does. Kensington’s website seems outdated and is difficult to navigate with titles within the sub categories of romance listed alphabetically.

8. Publish all series book in the same format. It’s annoying to have books of different sizes and/or types on the shelf for the same series. And as it is now, if a series shifts to hardcover in the middle, you end up having to buy duplicate copies of the same book or wait six months to a year until you have all books of the same type. I love the Bantam Discovery series where they put out the paperback and trade paper of the book at the same time. I think that’s genius. Ironically, I happen to like the trade paper better. Even though it is more costly, it lays open nicer and seems easier to handle.

9. Price hardcover ebooks at reasonable prices and release them at the same time as paper books. A sale is a sale is a sale, folks. Don’t punish the readers because the NYTimes and USAToday don’t take into account esales when tallying its lists. And please have ebooks available on the same street date as the paper copy. It seems to unfair to have to wait a week or even several for a book I can instantaneously download if it’s available.

10. Ask bookstores to shelve Romance with Romance regardless of the race of the characters and the author. And integrate your own websites instead of relegating AA authored Romance to separate lines and webpages.

Any other suggestions? Differing opinions? We want to hear them.