10. Don’t claim the dog did it. We all know that all but a very few dogs, maybe none other than Underdog, is capable of the task because they have no opposable thumbs. In fact, blaming it on any animal makes us suspect unless it is one of the gorillas studied by Dian Fossey.

9. Don’t plagairize someone famous. The more popular the author, the more likely your plagiarism will be caught out. Try to find someone obscure.

7. Don’t set up a website and post the plagiaristic material. If it is on the web, someone is bound to find it, particularly when google indexes it.

6. Don’t do interviews. Again, the more people that hear about you, the more likely that your stealing will be sussed out. Try to rip as many people off before the gig is up.

5. Don’t steal from rich authors. These people are more likely than the poor obscure authors to be able to hire lawyers to sue you into oblivion.

4. Don’t copy word for word. It’s harder to catch out your theft if you mix it up a bit. Maybe try the word randomizer.

3. Don’t advertise as writing “because I feel each person has something unique to share with the world and writing is my gift to share” when, in fact, your uniqueness is actually some other person’s uniqueness.

2. Don’t send to reviewers who are known as “mean girls” because they might make up a top ten list just to mock your stealing and then your gig will really be up.

1. Don’t publish it, particularly as a POD option since it doesn’t really make sense to pay for your own stealing. It kind of defeats the purpose of stealing in the first place.

Text from the Prologue of “Of Atlantis”
By Lanaia Lee

From Conception to Devastation

The golden-haired child sat alone, as he usually did, and wondered whether his Father would die today. Some distance away, across the royal gardens , his nurse was talking to the two sentries who guarded him during the hours of daylight. The soldiers, grim eyed warriors, did not look at him and shifted nervously as he approached.
Archimedes was used to this reaction. Even at four he understood it.
He remembered with sadness the day three weeks ago when his Father, garbed for war, had walked along this same garden path, his cuirass gleaming in the sunlight. It was so beautiful that Alexander had reached out to touch the gleaming plates of iron, edged with gold, six golden lions on the breast. But as his hand came forward his Father moved swiftly back.
"Don't touch me boy!" he snapped.
"I would not hurt you, Father," whispered the prince, staring up at the black-bearded face, with its blind right eye like a huge opal beneath the savagely scarred brow.
"I came to say goodbye," muttered Lionus, "and to tell you to be good. Learn your lessons well.–Ã‚ 
"Will you win?" the child asked.
"Win or die, boy, " answered the King, kneeling to face his son. He appeared to relax, though his expression remained stern. "There are those that think I cannot win. They remember Onomarchus defeated me when we last met.

Picture of the text from David Gemmell’s Dark Prince. 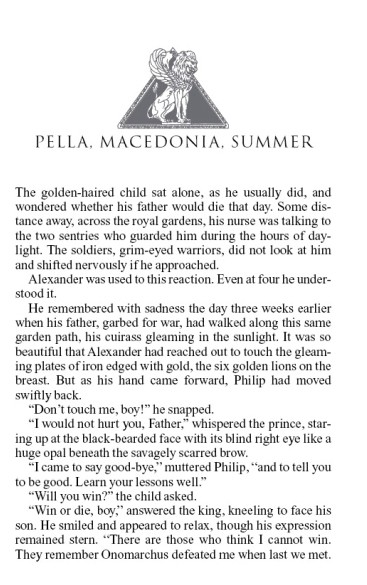