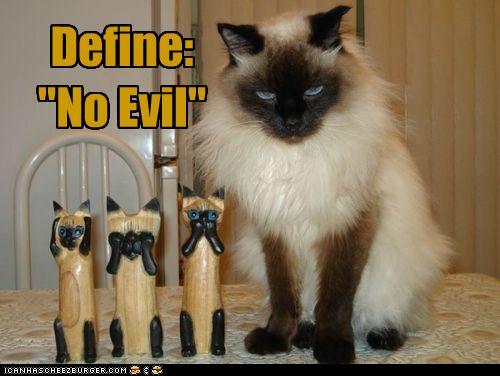 There are four types of romances as it pertains to villains:

The straight contemporary and the straight historical rarely have villains. The story is propelled primarily by the main characters and their romance.

Paranormals, Science Fiction romance, and urban fantasy books almost all have villains and usually another worldly creature who has lost touch with humanity. Humanity being usually being loosely defined as caring for someone other than oneself. In Patricia Briggs’s series, the villains are often power mad fae or vampires that have become too drunk on the acquisition of power.

Romantic suspense books feature either a sociopathic domestic villain or a sociopathic international villain.  In Laura Griffin’s series, the villains range from rogue police officers to politicians to random sickos.

How we define villains are important because a villain has to be rendered sufficiently amoral in order to justify the vigilante fantasy, particularly if the book has a #3 or #4 villain.

Justification here is a) just wrong in the head or b) too greedy for power and without remorse for the lives of humankind.  This latter line of thinking is often used to define villains.

If the villain is too dastardly, then it can’t be number 2. Drug dealers or those who traffic the sex trade are two types that seem to fall into number 3 or 4. (See e.g., Pamela Clare’s Breaking Point).  Many people clamoured for a book featuring Louis Renard, the villain in All The Queen’s Men.  I believe that the only reason that readers were drawn toward Renard was because all of his bad deeds were done in an effort to save his daughter.  In Catherine Mann’s Cover Me, the villain claimed to be doing his evil deeds for the love of his wife.  When the wife found out, she called BS on that arguing that she would never have wanted him to engage in his activities for the betterment of her life.

The international villain is popular for many authors who write about paramilitary organizations.  Authors like Cindy Gerard mix it up between horrible drug lords in South America to dirty American politicians.  (Note: politicians are another favorite villain)  Lisa Marie Rice’s villains are almost uniformly of some other country, often radical Islamic people.  I encountered another book recently that featured North Koreans as the villains.  Very plausible, but concerning.  If the sum total of Middle Eastern or Asian representation in romances are the villains, then the tendency toward homogenized characters becomes even more disturbing.

There was an author that wrote that racial balance can’t be obtained without it looking like a major Mary Sue Maneuver, particularly in historicals.  I find this disturbing because if you can create a villain in historicals that is a particular racial caste then I’m not sure why it is so challenging to create a non villain in the same time period of the same racial caste.

Alas, I don’t want this post to be all about race and villains (although that is an important topic).  What I’m really getting at is what makes an effective villain for readers.  Villains, more so than any character, are often flat and uninspired, relying on stereotypes and shorthand to get the message across that this character really needs killing, as Hardy says in Blue Eyed Devil.

I think the problem with the nuanced villain is that the killing of that villain isn’t as righteous and the readers don’t really get to experience the satisfaction of a wrong corrected.  Take for example, Jeannie Lin’s The Dragon and The Pearl.  I felt deflated at the end when three people who had done wrong to the main protagonists walked away with nothing more than a stern talking to.
Jeannie Lin responded to this (not just my feelings but others) with a really thoughtful commentary on Western v. Eastern philosophies:

I’d like to concentrate my thoughts on two themes and one trope prevalent in the resolution of The Dragon and the Pearl. The themes are the preservation of harmony, or more specifically in this case social order, and the importance of family to promote harmony. Though these themes are not unique to Asian stories, I believe they are prevalent ones. The one trope is the unexpected master/mentor. The murderous villain with a heart.
…
There are different themes and values at play here. There is no good. There is no evil. There is harmony and disorder. I think this is easiest to see in the resolution of HERO. Jet Li, the hero, has spent the entire movie with the singular purpose of killing one man: a tyrannical warlord who has consumed kingdoms and cultures in bloodthirsty and ruthless wars before declaring himself emperor. But at the end, Jet Li realizes this man’s vision was to unite the empire and create an ideal of “Our Land” where there was none before. It would be a greater wrong to throw the empire into chaos and so Jet Li stands down and sacrifices himself.
Warlord Li Tao in The Dragon and the Pearl has similar values. His honor system is built around the preservation of order.

If the villain shows more, ah humane, tendencies such as undertaking the course of action to further the good of a child or someone less advantaged or perhaps upholding a certain way of life for the greater good, then the killing of that character is disturbing to the reader.  However, one of the things that romances often lack is poignancy and nuance. In Kaylea Cross’ Deadly Descent, one of the characters is a Muslim intent on killing the hero.  The motivation for this character’s actions is that he believes the hero killed his brother.  Swept up in the anti-American talk, the character joins a local militia to move against the US soldiers.  Yet, nothing that this character does is villainous. He is fighting for what he believes in against the foreign occupiers.  He is avenging the loss of his brother.  These are the traits and motivations that you often find in heroes in romances.  I wasn’t sure if Cross intended a sympathetic portrayal but I read it as one and I was grateful.

Military heroes are often presented as believing themselves too villainous to love.   The redemption story line is built around the concept that someone who did something bad in the past can be heroic today.  In Tori St. Claire’s January 3d release, Stripped, the heroine is a CIA agent actually engaging in truly villainous activities for a greater cause.  She sends girls into the sex trade, posing as a Russian mobster’s girlfriend.  The goal is to find all the players in this sex trade to close it down.  Engaging in these activities and regularly sleeping with the mobster (none of which is seen but rather alluded to at the beginning of the book), the heroine becomes so numb to feeling and so disgusted with herself she believes herself to be irredeemable.  The author tries to convince the reader that she can and is redeemed, or at least worthy of redemption.  She pulled it off for me but I know that the acts of the heroine in the first part of the book may render the character irredeemable for many others.

Ultimately it comes down to a reader’s point of view, but my argument is that a more nuanced villain can create emotional tension in a story that can leave a reader thoughtful but still satisfied.   But perhaps the more nuanced villain is too close to the redeemed hero?  What’s your thoughts?