The perils of paid-for reviews 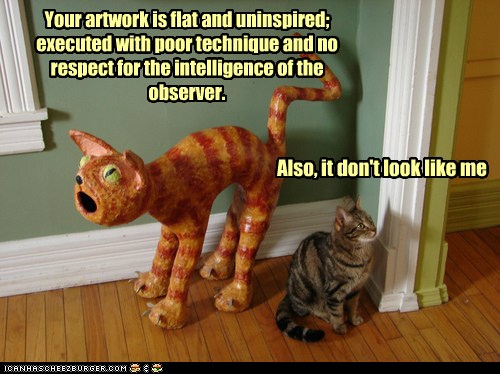 From I Can Haz Cheeseburger

Despite the regularity and ubiquity with which free speech is invoked in online discussions, it is rarely relevant in the way it is used, as either sword or shield. In the broadest possible sense, our online discussions (at least in the United States) are reflective of the “marketplace of ideas” theory of free speech, but for the most part, we’re not specifically implicating First Amendment protections when we’re making asses of ourselves expressing ourselves online.

This post is the first in a series on the First Amendment and online speech, and we’re starting with a topic of much recent controversy: book reviews, specifically purchased and sockpuppeted reviews and the threat they pose, not only to the relevance of honest reviews, but also to artistic and critical expression.

It has been almost three years now since the Federal Trade Commission (FTC) finalized its revised guidelines for online product endorsements. Before the Internet, advertisements and product endorsements were more easily distinguishable from independent, critical reviews of products. However, online commercial venues like Amazon have complicated that distinction, because it can be difficult to tell whether the person writing the review is a disinterested user or a paid promoter. In fact, we have recently seen a number of cases in which authors use sockpuppet accounts to endorse their own books and criticize the books of their competitors. RJ Ellory was forced to admit and apologize for this behavior after Jeremy Duns tracked through some Amazon reviews and noted his findings on Twitter  (it’s fascinating to watch Duns lay it all out tweet by tweet). Then there are those authors, like John Locke, who have paid review services to write reviews of their books in order to increase word of mouth and online influence/sales. And let’s not forget the authors and their spouses who have recently taken to Amazon to defend their (or their spouse’s) books and lash out at readers who have given them negative reviews: Henry Jaglom and Emily Giffin’s husband are two notable examples in the same number of weeks. Several years ago Christopher Pike used a sockpuppet account to rebut a Turkish woman’s objections to his fictional portrayal of Turkey, claiming afterward that it was the Turkish reviewer who was sockpuppeting negative reviews and accusing her of “tak[ing] things much too far and is trying to rob fiction authors of their artistic license.”

Much of why all this is bad has been rehearsed and rehashed online, each new incident increasing the pressure on an already fragile relationship between authors and readers on the subject of critical reading and reviewing. First there is the issue of honest reviewing, and the way in which sockpuppeted and purchased reviews undermine the trust readers can place in book reviews, even in venues that are generally perceived as legitimate. Then there is the negative pressure exerted by angry authors, their family, and their friends and fans, sometimes openly and misguidedly/unwisely (like Jaglom and Mr. Emily Giffin), other times anonymously and speciously (three guesses and the first two don’t count). This pressure has resulted in a number of book bloggers calling it quits – Hippies, Beauty, and Books and Pretty Deadly Reviews in the past week alone – and there has even been talk of death threats issued to reviewers like the woman who Emily Giffin’s husband targeted on Amazon (she details these threats in her blog post).

Things have gotten so bad that I’m starting to recommend books with the caveat that the author is not likely to lash out at a negative review. Because for all the hiding behind sockpuppet accounts and paid reviews, authors who take on readers for less than stellar reviews (this xkcd cartoon says it all) are crashing through the safety barriers between all authors and readers. As a friend of mine put it, ‘a book cannot respond to a review; only an author can,’ and once the author intervenes against the reader, the distance between the author and the book collapses, imperiling precisely that critical distance many of these complaining authors insist on.

Critical distance is good, not only because it encourages honest feedback on books, but also because it protects the freedom and integrity of book reviewing more generally. While authors and publishers might think of honest book reviews as marketing, at best that marketing is indirect, because there is a serendipitous commercial advantage to the word of mouth reviews can generate. In this sense, reviewing and marketing are parallel activities that can both serve a commercial purpose, even though the main purpose of independent reviewing is not to serve the author or the publisher, but to serve readers, both in terms of evaluating books and generating commentary and discussion. However, honest reviews cannot be bought or sold, which means they cannot be controlled by anyone except the reviewer. This unpredictability, the lack of a guarantee about whether or how a book will be reviewed, is part of what makes a “good” review so valuable as indirect marketing.

One of the objections that many of us had to the FTC’s guidelines as applicable to book bloggers is that book reviewing is the kind of critical expression that should remain free from government regulation. Because even with the First Amendment generally protecting speech from government restriction and suppression, there are categories of speech that the government does maintain an interest in, and commercial speech is one of those categories. Commercial advertising, paid endorsements, and other types of speech related to selling products and services have less protection than private or political speech (political speech is considered “core speech,” and as such has the most protection against government interference), because the government assumes an interest in the safety of the consumer and truth in advertising. Consequently, not only can the government regulate commercial speech in certain ways (e.g. to reduce deception), they can also define the scope of that regulation, as they did with the FTC guidelines on product endorsement.

Which is where the danger lies for book reviewing. Traditionally, art and the commentary it produces have been regarded with level of respect and broad protection similar to that afforded core political speech. Indeed, the political implications of artistic freedom create a philosophical link that can be important when considering whether the government has any interest in regulating, limiting, or outright censoring artistic and critical expression. So while book reviews, per se, are not subject to government interference, paid endorsements, aka advertising, are. And what is a paid-for positive review or a sockpuppeted review by an author if not advertising?

In the case of the sockpuppet, the author has a material interest in the product he/she is either promoting via a positive review, or criticizing via a negative review. The review is neither independent nor economically disinterested. In the sense that it is presented as an independent opinion, it is deceptive. In the case of paid-for positive reviews, while the fact of the review writer reading the book or not may make a material difference, the very act of exchanging money for a positive review makes the review itself part of a commercial exchange on behalf of the author, who has a material interest in both the reviews and the book itself. In both cases there is an attempt to mislead the reader into believing that the review is an independent, honest critique of a book, not a paid endorsement or self-interested advertisement.

The sad irony here is that authors have as much or more reason than readers to protect the integrity of their work and their freedom to produce it. Honest critique stands up for both artistic integrity and freedom, and yet it is imperiled by those whose interest is best served by supporting it. Once you pay for positive reviews, you take away the very quality that makes them valuable as indirect marketing. And by extension, every honest opinion becomes suspect. While such behavior may be regarded as somewhat marginal at present, the more mainstream it becomes, the more it threatens to kill the very thing it is trying to replicate.

There is already a wide gamut in reviewing, with professional ‘pay to play’ publications like Kirkus and PW Select, not to mention RT’s policy of ‘buy an ad, get a review.’ And let’s not forget the ChickLit Girls blog that got in trouble recently for charging authors for reviews (which would inevitably be positive, since they openly said they did not publish negative reviews) and then threatening an author who disclosed the scheme. Of course there is a big difference between having reviewers be paid for their work and paying for positive reviews. And the question of whether paid reviews can be honest is affected by many different factors. Professional book reviewers are certainly paid, and their credibility is not suspect. But offering positive reviews for money is a very different thing.

At what point do book reviews become commercial speech and therefore subject to government regulation? At what point does the FTC decide that there is enough concern about the independent nature of reviews to step into the book blogging world and cast a shadow on the many honest, independent bloggers? And what would the effect of that be on the relatively free and open environment in which book reviewers currently function? Readers are already skeptical of online reviews, and at some point, reviews as a whole could become so suspect that they will no longer provide the indirect marketing so many authors and publishers depend on. What then?

I don’t know what responsibility and power readers have in this situation besides standing up for and providing honest, independent opinions on books. Beyond that, I think we have to depend on authors (and perhaps publishers) to have as much respect for honest critique and critical freedom as they want us to have for their work and their artistic freedom.