The Many Faces of Plagiarism

I read more than a few posts, emails, bulletin board messages that no one was hurt by the a plagiarist but the plagiarist herself. In reading about the authors of the works that were copied, I couldn’t help but to be moved by their individual stories and how important their contribution was to society, even beyond their individual works. There are a few of the victims and here are some of their stories, in no particular order.

Arthur Caswell Parker authored 14 books and over 300 articles from 1900 to 1959. He was born in 1881 of a Seneca father and a Scottish-English mother. Parker enrolled in Harvard but would never graduate. Instead, he embarked on a career of archeology, exploring his Seneca legacy by excavating a number of his people’s sites. He tirelessly worked to preserve the Iroquois heritage through archeology, museum preservation, and his literary work.

George Amos Dorsey was an anthropologist who collected “folk tales of the Osage Indians” and served as a naval attache, a writer for the Democratic National Committee, and a lecturer on anthropology for the New School for Social Research in New York City. In 1925, he published the book Why We Behave Like Human Beings, in which he wrote, “As one recalls some of the monstrous situations under which human beings have lived and live their lives, one marvels at man’s meekness and complacency. It can only be explained by the quality of flesh to become calloused to situations that if faced suddenly would provoke blisters and revolt.” 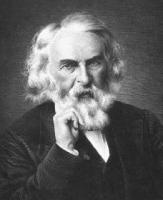 Henry Wadsworth Longfellow was an American poet and translator. He wrote textbooks in French, Italian, and Spanish, and was the first American to translate Dante’s Divine Comedy into English. His epic poem, “The Song of Hiawatha” was published in 1855 and was based on the legends of the Ojibway Indians: “Longfellow credited as his source the work of pioneering ethnographer Henry Rowe Schoolcraft, specifically Schoolcraft’s Algic Researches and History, Condition and Prospects of the Indian Tribes of the United States.” The final stanza of the poem reads: 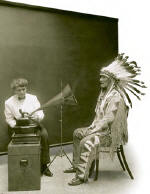 Frances Densmore was “an American ethnographer and ethnomusicist” who “worked as a music teacher with Indians nationwide learning, recording, and transcribing their music, documenting its use in their culture.” Educated at Oberlin Conservatory, Densmore “began recording music when a tune hummed by Geronimo caught her attention,” and spent every summer for ten years visiting reservations and recording the music of a different tribe. Her efforts to preserve the musical culture of an astonishing number of Native American tribes are now in the Library of Congress, though she refused to record the most sacred of the songs belonging to each group.

Oliver La Farge was a white wealthy Anglo French New Englander who took a keen interest in Indian causes. In his last year of his master’s program at Harvard, La Forge penned Laughing Boy. In 1930, Laughing Boy would beat out Ernest Hemingway’s A Farewell to Arms and William Faulkner’s Sound and Fury for the Pulitzer Prize.

While LaFarge wrote several other short stories, he wrote only two novels in his short lifetime (1901 – 1963). Laughing Boy showed the world that Navajos were as civilized as the rest of society “a people equal to us in all but technology, and as civilized as we are in all but their lack of a written language. It should come as no surprise, therefore, that La Farge was instrumental in helping the Navajos to acquire new technology and, ultimately, to write in their own tongue.” 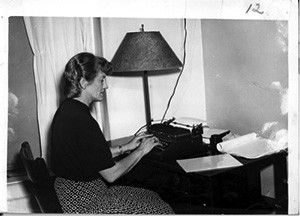 Mari Sandoz published her first short story at the age of 11 which earned her a beating and a stay in the family cellar. Despite being isolated on the farm and ridiculed for her desire to learn, Sandoz grew to be one of the foremost chroniclers of Nebraska history. One article I found on the internet said that Sandoz’s writing was her life and allowed nothing to interfere: “She often spent hours at a time in a dank basement of the State Historical Society, reading old newspapers-‘by flashlight if necessary-‘as research for her future writing.”

Her relationships suffered, she suffered; but it was all for the sake of her art.

It is doubtful that Luther Standing Bear would be angered by Ms. Edwards unattributed use of his writing. “The character of the Indian’s emotion left little room in his heart for antagonism toward his fellow creatures.” Luther Standing Bear was used to his culture being torn from him. He was 11 when his family was forced off the land onto a reservation and Luther himself was sent to the Carlisle School in Pennsylvania. At the school, Luther would be stripped of his heritage-clothes, hair, names and language – in an effort to civilize him.

He became part of the Wild Wild West Show, was wooed by Hollywood, and in the 1930s would begin publishing his books, including Land of the Spotted Eagle, about his Indian heritage.

My father was a scoutmaster for several years. Every summer we would go to Tomahawk Scout Reservation where my sister flirted with boy scouts and I crawled around on the ground searching for agates for my growing rock collection. What my brothers and father did, I was not privy to. It’s called Boy Scouts after all. At the end of the stay, the older scouts would reenact a tribal story. I don’t remember the story, only the scents of the woodsmoke, the sparks from the huge bonfire, and the thunder of my heart when the boys ran by bellowing out their war cries.

Dr. Charles Eastman helped found the BoyScouts of America. One of his seminal literary works was Indian Boyhood, an autobiography of his first 15 years where he, as Ohiyesa, a Dakota Santeee, struggled to survive with his family facing starvation and hostile tribesman. Ohiyesa became Charles Eastman when his father decided that his family’s future was adopting the “white men’s ways.” His formative years, however, would have a great impact on him and Dr. Eastman would become a great ambassador of his culture.

Robert Hughes is considered America’s foremost art critic. A former regular for Time Magazine, Hughes is seen much less publicly since a terrible car wreck in Australia, his birth country. Hughes’ bestselling Fatal Shore which is described as “an assiduously and tirelessly researched work” was based on “diaries, letters and original sources.”

At one point in Hughes’ writing career, he was overloaded: he had a deadline to meet and his difficulty in producing led to thoughts of suicide.

I was about to blow my head off, and then I took the gun and threw it in the sea. It was a really rough time

He overcame his self doubt and despair and set a goal of writing every day, 9,000 words a week, a chapter a month. His marriage suffered (and probably every other aspect of his life) but his obligation was to finish his work and he did. 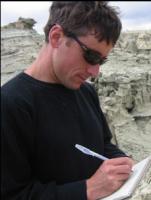 Paul Tolme is an award winning writer and journalist who specializes in environment and wildlife topics. His articles have appeared in Popular Mechanics, Defenders of Wildlife, National Wildlife, Newsweek and several other publications. In 2005, Tolme traveled with biologist Travis Livieri to learn about the plight of ferrets. Because ferrets are nocturnal, Tolme and Livieri spent the night hours staking out the ferrets from Livieris’ pickup. The ferrets are an endangered specie with only about 1,000 in existence in the wild, according to Tolme’s Newsweek article. The circle of life story is the cause of ferrets demise. Prairie dogs are a primary source of food for the ferret but the prairie dog population is being poisoned intentionally to provide grass for cattle.

→ Jane
Previous article: Paul Tolme Speaks Out About the Copying of His Work
Next Post: EOS Giving Away Free Book in E Format Every Two Months