Does Romance Need the Rooney Rule 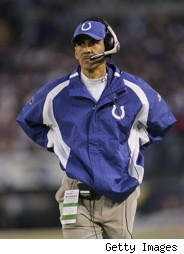 February is Black History Month. In a rare moment of serendipity, a new entry into the annals of black history was written. Tony Dungy, the head football coach of the Indianapolis Colts became the first black coach to win a Superbowl. This history making event had actually been predetermined two weeks earlier when Lovie Smith's Bears won the NFC Championship and Tony Dungy's Colts won the AFC Championship. A black head coach was going to be crowned during the Superbowl. The question was only which one.

In 2002, the NFL adopted the “Rooney Rule” which required all teams to consider a full complement of races when making hiring decisions. In practice, it is widely acknowledged that you must interview one minority candidate for each position. The rule was given teeth when the NFL fined the Detroit Lions $200,000.00 when it choose to hire Steve Marucci as its next head coach without interviewing any minority candidates.

Some inside sports decried this fine because Detriot had wanted Marucci and only Marucci. Why drag some poor African American coach up for a cursory and token interview? Yet, since the Rooney Rule was implemented, the number of minority coaches has tripled to six. Affirmative action seems to be working within the NFL. Should there be some type of similar affirmative action in romance?

A week ago, a fellow blogger asked me why I didn't read more African American romance. This was days before a certain scuffle on the internet erupted. Said blogger got me to thinking and I have been going over this in my mind for days now and this is the distilled results.

If I am making race based decisions as a reader, is that wrong? For example, I am Asian. I have lived a unique life as an Asian American and I have found I like to read stories that reflect that experience. There are certain commonalities. When I was perusing the Little Brown catalog for young readers last year, I saw a book entitled: Nothing But the Truth (and a Few White Lies) by Justina Chen Headley. It was a story about a teenaged girl dealing with only in parts: part white, part Asian and never a whole. That story resonated with me, along with stories from Cara Lockwood.

Is it racist of me to gravitate toward themes and stories which have similarities to my own experience?

If I read characters that are of different cultures and ethnicities, does that make me non racist? I.e., I have read Howl by Raine Weaver featuring an African American heroine. I haven't reviewed that book because I haven't read the rest of the anthology, but it was quite good. I enjoyed the Kyra Moray series featuring an interracial couple and another Deanna Lee book, Undressing Mercy, featuring an interracial couple. Alison Kent's Beyond a Shadow featured a mixed couple. The hero is not African American but rather Caribbean. Suzanne Brockmann wrote Harvard’s Education, the first featuring black couple to grace the covers of a category romance novel. Shelly Laurentson's The Distressing Damsel features a woman with “soft brown skin” and “[b]ig brown eyes.”

Should I be seeking them out? What about the poor Asian midlist authors such as Jade Lee and Gennita Low? Shouldn't I support these ladies? And didn't I show just how racist I am not by supporting Nalini Singh? She's Indian and her heroine is some mongrel mixed race person.

When I was first asked, my knee jerk response was that I was lazy. I didn't see any romances featuring African Americans in the regular romance aisle. I read a lot of paranormals and don't see any paranormals featuring African Americans. Surely, if the books were side by side, I would make my decision based on blurb alone. I felt confident in myself recalling the Avon books I had been sent this month. Gimme an O by Kayla Perrin featured a philandering married man as the hero and a sex therapist as a heroine. Infidelity and already married? No thanks. How about Hot Boyz by Marissa Monteilh featuring three perfect dreams that are shattered and a family shaken to its core with legacies of loss and obligation, tragedy and madness, threatening everything the Wilson brothers have worked for. Doesn't sound like a romance. (note that these are all marked “Fiction” on the spine).

Then I got to thinking. What about the ebooks, Jane? Every month I cruise Fictionwise, Ereader, and Harlequin looking for new books. I would look at the “Luna” line. More recently I looked at the Blaze line or the Nocturne line. Never once have I looked at the Kimani Press line.

Why not? Ultimately it came down to this and I cringe when I read it in print. I made the assumption that the themes of these books would be more urban in nature or more like the Toni Morrison books I’ve read which have all been very women’s fiction-y. I felt awful when I reached this conclusion.

Surely, I can't be racist. My second mother, one to whom I send flowers to every mother's day and has been an influential part of my life since college, is African American. Nearly every African American I have been exposed to has been college educated and professional. So why would I assume that the stories in the books published under the Kimani imprint be any different than their stories or my story, frankly? It’s a bit lowering. No, shameful, to have examined myself and found this. (of course, I do have preconceived notions about Harlequin Presents line too).

Obviously I was making a race based assumption and a wrong one at that. Last night I perused the blurbs for about 15 Kimani Press books. They sounded like every other category romance out there. Some filled with babies. Others filled with CIA operatives. Some with Deserts and Sheiks. (The latter one I bought).

The fact it is that publishers aren't marketing to me but that is because I am not buying. If more non African American readers began buying books featuring African Americans wouldn't the publishers market those books to everyone, instead of special group of individuals. Ned says that the decision to put African Americans in their own special place is akin to going to the movie theatre and having a camera identify you as white and then exclude movies like Drum Line or Stomp the Yard. If you wanted to see those movies, you would have to go to a special section of the theatre, plus you have to actually know that it exists. That is so ridiculous.

This is a double edged sword though. Are African American authors going to lose sales at a greater rate of gaining sales by moving to the main romance section.

Ultimately the question is whether we as readers, booksellers, bloggers, word of mouth purveyors have a moral obligation to read outside our ethnicities. Should we institute the Rooney Rule and read one author a month that is not Caucasion. Wouldn't that go a long way in abrogating race based assumptions? I know that I, personally, am going to make a greater effort to read other ethnicities, including but not limited to, African American authors. But, I am still not reading the Kayla Perrin book.

Janine commented to me

Something else to think about is that it can be tough to find a truly great book, regardless of its author’s race or religion. In search of that great book we online readers often rely on the recommendations of other readers and review sites, as well as on bestseller lists. If we don’t get recommendations for books by minority authors, or see those authors on bestseller lists, we may end up not buying or reading their books, without any conscious intent to avoid them. Is what’s needed here a kind of affirmative action program for minority authors? Would something like that work in the context of a recreational activity like reading, that people do for fun?

Speaking for myself, I don’t actively go out looking for AA authors but I don’t try to avoid their books either. If a plot or hook interested me, I’d read one. But I’m not going on some quota system for something which, as Janine points out, is a recreational activity for me. This is supposed to be fun time. If we were a professional review site, then maybe we would need to insure that we cover a broader spectrum.

Karen Scott is running a survey of race in romance and is seeking out African American authors to answer it. I hope she gets her 100 participants as I am truly interested in what the survey will reveal.