Paranormals by the (Unscientific) Numbers

Jane’s Note: Someone more adept at gathering and collating information contacted me about doing a guest post on paranormal books from the perspective of what editors are buying. The numbers were interesting and I was glad to post the following:

Paranormal has been the hot genre for years now – readers (and publishers) can't seem to get enough of books with vampires, shifters, ghosts, and just about anything else that can be made sexy and heroic. But is the market cooling on the paranormal trend? Are we about to see the genre go bust? I took it upon myself to do a little market research and see what I uncovered. As we go forward, please consider this article an opinion piece, as this is not scientific by any means.

In my eyes, there are three aspects of the "paranormal' marketplace – you have paranormal romance, urban fantasy, and YA paranormals. I believe that these three markets feed off of each other and there is crossover between all three groups. If this was a Venn Diagram, their circles would be incestuous indeed. 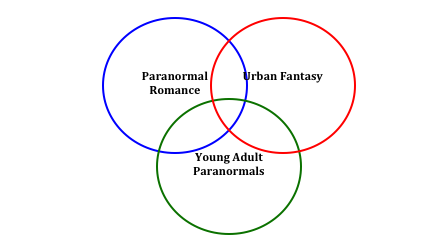 A Bookscan subscription is  really expensive and while that would be optimal to track how well paranormal books are selling, I decided on a different route. Instead, we'll look at what has been bought over the past few years and reported to Publisher's Marketplace.

This is where things get even more unscientific. A few caveats: not every agent/editor reports to Publisher's Marketplace. The occasional book is misclassified or it's impossible to tell what the genre will be when reading the blurb. Also, some extremely tiny publishers are included in PM, simply because anyone with a subscription and a sale (however iffy) can report to them.

For the purposes of this article, we're going to go off of information reported to PM that is easily classifiable as one of our three genres: Paranormal Romance, Urban Fantasy, or YA Paranormal. We're also excluding certain small publishers because I'm more interested in tracking what the "Big NY Houses' are buying. The following small presses were excluded:

Nothing wrong with these particular publishers in general – I'm looking at the larger market in general.

Let's examine Paranormal Romance, first. I compiled a spreadsheet and tracked every easily-identifiable PNR sale for the past 3 years, and compared it to how many sales were classified as romance by PM. 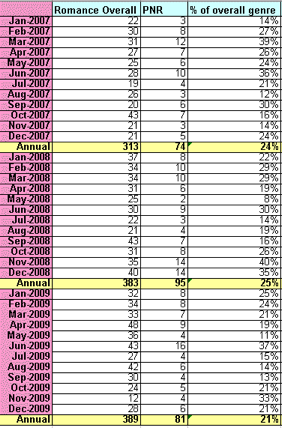 Opinion: It looks as if the best time to sell a paranormal was in 2008. In 2009, the trend appears to be receding slightly, though still strong. But romance is also doing better than ever (a sure thing in this economy, perhaps). 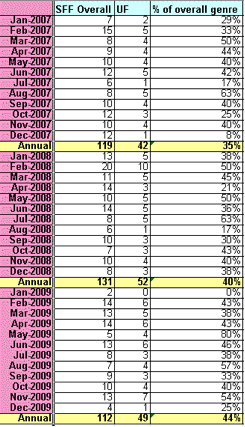 I've heard both that Urban Fantasy is either Red Hot or Totally Flat, depending on who you talk to. The numbers look as if 2008 was the best time to sell an urban fantasy. The most interesting thing is the percentage of SFF/Fantasy novels sold in comparison to the rest of the genre. UF has been steadily climbing, percentage-wise.

Opinion: Given that there are a lot of sub-genres in SFF (steampunk, dystopian, epic fantasy, military SF), I'm guessing that if you want to be published on the SFF shelves, your odds are best on an urban fantasy.

Now let's take a look at Paranormal YA. 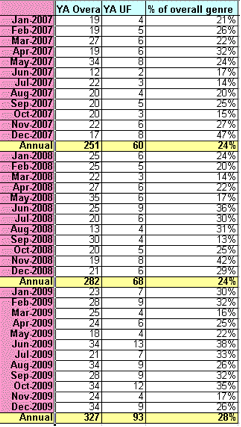 Opinion: I am totally not surprised by these results.

Given that all of this is hand-wavy scientific, I nevertheless thought this was interesting information. I took things one step further and asked both a well-known agent and an editor at a major NY publisher for their opinions on the state of the Paranormal market (such as it is).

Here are their answers:

Me: As an agent, do you find that it’s harder to sell paranormal romance currently than in the past few years? If so, why is that?

Well-Known Agent: No–the sales for it have been strong so houses are willing to keep acquiring.

WKA: I have found this to be true, particularly with houses that publish UF as part of SFF rather than romance–as the trend has matured houses have found their successes and so a project has to fill a very specific niche and be executed at a higher level than ever before to convince the team it’s a smart acquisition.

WKA: Because of shelving, I don’t think it will. Different bookstore buyers, different publishers–even if there’s reader overlap, from a business standpoint I think they will stay distinct.

I asked the same questions to the Big Fancy NY Editor:

Me: As an editor, do you find that you are buying more or less paranormal romance currently than in the past few years? If so, why is that?

Big Fancy NY Editor: Overall, we’re buying a little less paranormal, but we’re publishing about the same if not more than 2 years ago.   I definitely think it’s harder to sell paranormal now than it was 2 years ago.


BFNYE: Like paranormal, I think UF is flat–there’s a lot of choice in UF for readers to choose from, and many are exercising that right to choice rather than just buying everything in this area that’s published.

BFNYE: I don’t think acquisitions for YA paranormal really impact acquisitions on the adult side because although we’re hoping for crossover, we know YA is a completely different market, and YA has the advantage of having new readers every few years.   Hopefully the YA readers weaned on paranormal will continue to seek out paranormal in adult books, but there’s no guarantee since they’re also the readers most likely to suffer burn out.

Again, these results are completely unscientific, and this article is meant to engender conversation more than anything else. What do you think of paranormal trends, as readers? Is there a particular one of the three (paranormal/UF/YAUF) that you are tired of? Or is there always room for more?