Up until this weekend I was one of those readers who didn't really care that I couldn't articulate the difference between erotica and erotically charged Romance. "I know it when I see it–? was good enough for me. Then I read Emma Holly's newest release Fairyville and had one of those DUH! moments –" you know, where something crystallizes so clearly you can't believe you didn't see it before. 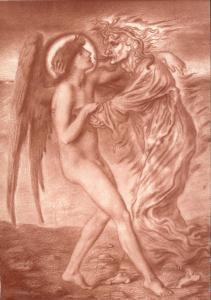 Holly's books have always appealed to me, and one of their surprises is that the books marketed as erotica always seem much more good natured and light hearted than her historical and steam punk Romances. The characters in her erotica may have issues, but they always take such good care of their partners in bed. There is always an incredible sense of respect and concern and safety in the sexuality, so that as the sex scenes begin to pile up it never feels gratuitous to me. The characters are obviously having lots of fun; they show concern for each other's well-being and happiness, and everyone usually gets a relatively happy ending. In fact, despite the relatively non-traditional happy endings for the protagonists — polyamory a common solution –" even her erotica feels somewhat romantic in nature, as characters seem well on their way toward a healthy and happy relationship.

Fairyville is explicitly romantic in that sense: Magnus and Zoe, and Bryan and Alex — the two distinct if intermingled couples of the book –" all seem firmly committed to each other. Zoe and Magus, especially, share a love that clearly transcends their profound physical attraction. Which is the kind of thing we often expect in Romance. And in Holly's more straightforward Romance, there is a guaranteed happy ending for the lovers, and even a pretty healthy dose of erotic expression. I remember reading Beyond Seduction pretty early in my Romance reading days and being surprised (although not unpleasantly so, lol) at the extent, explicitness, and earthiness of the book's sexual content. And yet when I read a book like Courting Midnight, one of my all-time favorite Holly books, it doesn't matter that Gillian and Aimery go at it like minks (not that I really want to know how minks 'go at it'), I read that book much more obviously as Romance than the romantic “Fairyville”.

Until I read “Fairyville,” I never really internalized the idea that in erotica the character development occurred and is communicated through sex (yes, I can be very dense). That just seemed like a flimsy excuse when saying publicly that you want to read a book just because it turns you on might be a wee bit uncomfortable. Now, though, when I think of, say, Megan Hart's Dirty, I think I understand the difference between that book and, say, Jo Goodman's If His Kiss is Wicked. In the Goodman book, the physical intimacy the characters share isn't necessarily the product of love, but it is fundamentally an emotional expression as much as a physical exchange. And the sexual bond between the characters grows stronger and deeper as they each move forward on their own emotional journey. Emma and Restell have the best sex, the most passionate, mind-blowing, unbelievably hot sex, after they finally declare their love for one another. So while the sex and the emotion are interconnected, the sexual openness and power tends to follow the emotional growth of the characters.

By contrast, in “Dirty” or “Fairyville”, the sexual interactions of the characters precede emotional growth, and in books where emotional growth is a real part of the story, sex most often catalyzes big emotional epiphanies and changes. Dirty's Elle, for example, begins the book completely unwilling to open herself up emotionally to a man. She craves both the release and the shame of anonymous sex, and only after a good deal of sexual exploration and openness with Dan does she begin to experience any emotional evolution. Dan knows that the way to keep Elle is by keeping her engaged sexually, and he continues to push her for greater and greater physical intimacy until she begins to crack open emotionally. For Elle, and for her relationship with Dan, sex comes before emotional growth, and, in fact, facilitates that growth. It is the same for the characters in “Fairyville”, especially Alex, who undergoes the most powerful emotional transformation in the book.

Although Alex is relatively successful, both in his career and with his sexual conquests, he is not emotionally healed from wounds he sustained when he was younger. Sexually voracious and adventurous, Alex is much easier to engage physically than emotionally, and the two people in his life for whom he has strong feelings –" business partner Bryan and high school girlfriend Zoe –" are caught in the emotional dysfunction that is Alex's inner life. Bryan pines for Alex, and Zoe has never completely moved past him, and it takes a great deal of sexual engagement among all of them before the emotional threads of their interconnected lives begin to untangle and settle into a more coherent pattern. There is something about the trust exchanged, the physical intimacy allowed, and the care taken that opens the emotional channels between these characters, allowing old wounds to heal and new bonds for form.

What's most interesting to me about comparing straight Romance to the type of erotica that, say, Emma Holly and Megan Hart write is that there's a romantic quality to it that, I think, might drive some of the difficulty in carving out a clear difference (i.e. it's the typical distinction without difference). Not that I think erotica has to contain an emotional element, but I wonder if the distinction between erotica and what we popularly call pornography is the absence or presence of a discernable emotional component. That's much less clear to me and really is a tangent, though.

As for erotica and Romance, though, at least for the moment I seem to have arrived at a place where I have a sense of the difference –" for myself at least. Except now I'm trying to figure out where I'd categorize Pam Rosenthal's The Slightest Provocation or Shelly Laurenston's Pack series. Maybe it doesn't matter thought. I guess it depends on whether one focuses on where a book ends up or how it gets there. Does Romance, for example, have to keep the emotional growth primary to the physical exploration? I don't get the sense that there's much conflict in designating erotica, but that for Romance this might well become a critical question.

→ Janet
Previous article: REVIEW: Perfidia by Elspeth McKendrick
Next Post: Women Read More Than Men, But We Don’t Know Why