Let’s Give Them Something to Talk About

A common refrain arising out of last week’s Magic Under Glass cover controversy is that authors are afraid to speak out against their publishers — even over racial misrepresentation on their covers. It seems authors fear that if they speak out they could be labeled as troublesome, and that the label could prevent the publication of future books. Enhancing this fear is the fact that often when an author does speak out, other authors offer criticism rather than support. When Anne Stuart complained her publisher wasn’t adequately supporting her books, for example, many authors declared she was lucky to be published at all and noted there were others who would happily take her place. It seems there’s so much repressed frustration that it sometimes causes authors to lash out in odd directions. For example, Mindy Klasky was more comfortable castigating Kindle readers for leaving her one-star reviews than she was discussing the publisher decisions that caused the situation in the first place.

Fear of criticizing one’s publisher evinces a certain lack of faith in one’s work. If speaking out on an important issue like one’s cover might cause an author to become unpublishable, I wonder how saleable that work really is. If the author’s voice is so easily replicated or replaced, why should it make any mark in the marketplace?

By coincidence, during last week’s controversy, I received an email from Barry Eisler, whose French publisher, Belfond, has repeatedly chosen covers Barry finds weak. Barry’s past attempts to persuade Belfond to change course have been fruitless, and Barry found their latest proposed cover so insipid and inappropriate that he decided to pen them an open letter. Would I post it, he asked? In a word: yes.

Will authors ever feel free to criticize publishers? Should they?   Should a conspiracy of silence be maintained? Does that help or hurt?   Is is unprofessional to air out criticisms in public?   If yes, what kind? If no, why?

An Open Letter to My French Publisher (and, by Extension, to all Publishers):

I’m grateful that you like my novels enough to buy the French publishing rights. And I hope it goes without saying that I want you to succeed with those rights, and succeed wildly. In fact, I think I can safely say to all publishers, on behalf of all authors, that we want nothing more than to help you succeed.

But damn, you sometimes make it hard.

The cover you plan to use for my seventh novel, Fault Line, pictured below, is inexcusably bad. It’s not just bad for my book; it would be bad for *any* book. It wouldn’t even work as part of a brochure from a surveillance camera equipment supplier (although at least there it would have some logical connection to the underlying product). Yes, it’s that meaningless. That boring. That unlikely to cause a potential customer to do anything but overlook it and move on. 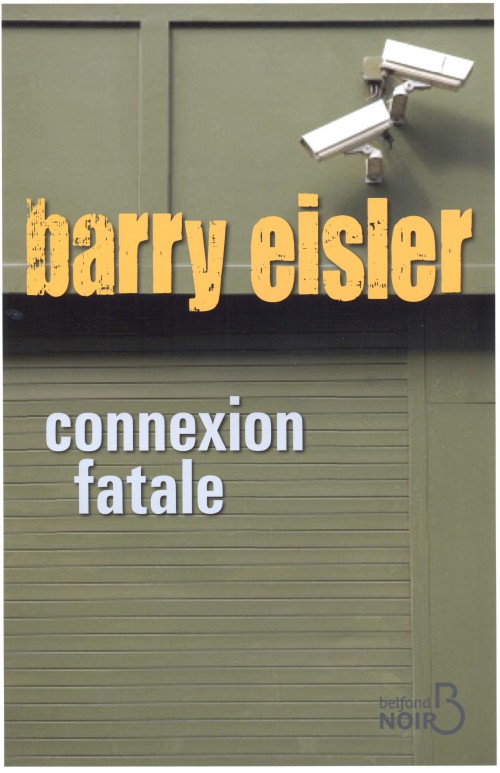 Before we go further, let’s acknowledge two things. First, two percent of people are going to love your cover. It’s their favorite color, they find garage doors strangely erotic, whatever. It doesn’t matter. Such reactions are idiosyncratic and will exist in two percent of the population for any cover imaginable. Unless your goal is to appeal to only two percent of your possible customer base, you need to do better. Second, I understand different things work in different markets. But what you’ve chosen isn’t a violation of a particular market sensibility. It’s a violation of the fundamental principles of marketing itself — principles that apply across cultures. We’ll discuss those principles below.

Now, I grant you, Fault Line isn’t an easy story to capture in a cover. Two brothers — a soldier and a lawyer — riven by an old family tragedy. A conspiracy that forces them back together. A beautiful Iranian-American woman each desires and distrusts. Sex, violence, exotic locales. Suspense. A backstory right out of the headlines.

Did you notice how, in describing the book, I’m also describing its potential selling points, the points that might induce a potential reader to buy it? For some books it’s harder, for some it’s easier, but this is always what you need to do.

Now, can you identify even a single *one* of the selling points I mention above in your proposed cover?

I didn’t think so.

Let’s look at it another way. If you knew nothing about the underlying book and could judge only by this cover image and title, what would you guess the book is about? Related and equally important, what would the cover suggest the book feels like? Sexy, gritty, funny, phantasmagoric, scary, thrilling, fast, slow… you get the idea. A cover should convey sellable mood as well as sellable story points.

What you’ve proposed for Fault Line looks like a closed garage door with a couple CCTV cameras top right. The title suggests there’s some kind of fatal connection here, but in the absence of anything else, that’s not much to go on. So you’d have to guess, “The book is about closed garage doors. Or maybe surveillance cameras.” Of course, you’d be wrong — in fact, the book is not about garage doors or surveillance cameras, or even about concepts suggested by garage doors and security cameras. There is some (incidental) surveillance in the book, but even if the pictured cameras appealingly conveyed this notion, is surveillance really one of this book’s key selling points? Really the reason someone might want to buy this book? Is surveillance the reason *you* bought the book?

The proposed cover doesn’t even offer higher-level clues. Sex? Action? Exotic locales? Is a single one of these more general selling points even hinted at in this proposed cover?

Are those qualities that attract you to a story? Do you expect they will attract readers?

Of course not. In fact, if someone deliberately sought the most insipid, inert image possible, it would be hard to beat what you’ve proposed. I can only conclude from this that you don’t understand what makes a cover work, or what principles you ought to apply in choosing one, and that you’re therefore picking images more at less at random. That’s not good — you’re in the business of selling books, after all — but it would be worse to just accept this level of performance and give up. So I hope the following will help.

You need to start by asking yourself what *you* liked about the book. Why did you buy the publishing rights? What about the book made it special to you? Why are you excited about it, what moved you, what do you talk about when you talk about the book? If you like, you can approach this step instead by trying to articulate to a imaginary customer why he or she would like the book, find it exciting and satisfying, etc.

Next, once you’ve articulated these things and refined them, list them, in order of importance.

Third, try to identify imagery that suggests these things. You can do this yourself, or through a design firm to whom you’ve conveyed the list above (but don’t outsource the creation of the list itself. You might wind up with… well, with a picture of an olive-hued garage door). The imagery you or the designer selects will form the basis for the cover.

Finally, pressure check the proposed cover by asking the question I mention above: If you knew nothing about the underlying book and could judge only by this cover image and title, what would you guess the book is about? If the cover provides the correct answers — that is, the very things *you* liked about the book — you’re doing well. If you want to be thorough and do this test properly (and why not?), show the cover to people who really don’t know the first thing about the book and ask them what they think the book is about, what they think is the feel or mood of the story within.

A good cover will engage the potential customer. Eye-catching is fine, but it isn’t enough — otherwise we could just slap on florescent colors and zebra stripes and call it a day. As a general rule, there should be something in the cover that suggests a story, that makes the reader wonder about something hinted at but not revealed, that causes the reader to want to pick up the book to investigate further, something that’s like a whispered promise on which the book will then deliver. If a cover doesn’t interest a potential reader enough to at least cause her to pick the book up and flip it over, you’ve lost the opportunity to get her to take any other steps that might end with her carrying the book to the cash register. And if a cover doesn’t help you sell books, whatever else it might be doing, it’s a failure.

Stated simply, you must keep two things in mind: what a cover is for, and how your cover will achieve it. If you can’t clearly and persuasively answer both these questions, your efforts are likely to be substandard.

For what it’s worth, you’re hardly the only publisher that finds itself, shall we say, book packaging challenged. See, for example, Stephen King excoriating FSG for their inexcusably anodyne packaging of Mischa Berlinski’s Fieldwork. Or browse the shelves of any bookstore and see how few books are packaged effectively. Or consider this example of a publisher’s proposed author bio. But why not be better? After all, a poorly thought-out cover doesn’t cost less than a well conceived one. Mediocrity doesn’t save you money. It only costs you. And with so many poorly-packaged books out there, it’s easier for a good one to stand out.

Forgive me for discussing your packaging shortcomings in public, but I’ve tried before in private and to no apparent effect. I hope that by addressing you in this context, I might finally get your attention. And though I recognize this kind of communication might irritate you, a reaction authors generally fear, what do I have to lose, really? If you go ahead with this cover, you’ll have killed the book in France anyway (not for the first time, let’s be honest). So for me, there’s not much to lose in beseeching you to do better. And even if you don’t listen, others might learn from your mistakes. A conspiracy of silence on ineptitude in this business is slow suicide for everyone involved, and I’d like to see other authors push back harder when their publishers propose ineffective packages. If this letter encourages or enables other authors to improve their own publishers’ efforts, it would be some measure of consolation for stillborn sales of Fault Line.

But come on, you can do better than this. My British publisher did. Their initial covers for the UK Rain books were almost as bad as what you’ve proposed for Fault Line, and my sales in the UK reflected it. But to their great credit, the Brits acknowledged how poorly they had done, did a complete rethink, and dramatically repackaged the books with stunningly good covers (images below). My UK sales immediately shot up, I earned out, and my UK publisher is now firmly in the black with me. You can do the same, if you want to. I hope you’ll let me help.