It Is Not Enough to Write a Good Book

Over at the Smart Bitches, a controversy is raging over the appropriateness of the outfits worn by Marianne Mancusi, Liz Maverick, and Sherrilyn Kenyon at the Literacy Signing. The Literacy Signing was attended by over 450 authors. It is open to the public and the goal is to sell as many books as possible to fund literacy. Over $56,000 was raised. It is the only event open to the public but not the only event open to the press. There is a press room at RWA and it has a table full of books for press people to take. 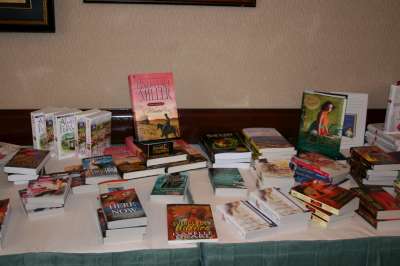 Many things were bandied about such as dressing in costumes leads to greater disrespect for the romance genre to the costumes being unprofessional to some very distasteful. One commenter, Author Deborah Smith, accused the women dressing as pedophile luring schoolgirls. One of the last of the 100+ comments was made by Corrina, an aspiring author.

I think what we’re discussing is the balance between them and where the line is drawn and if we can choose that line for ourselves or if the publishers will decide its so important that they’ll choose it for us.

This was what the real crux of the argument is. When publishers spend so little on the promotion of their books, the onus is on authors to create their own buzz. To be not only writers, but marketers and publicists. To be personalities so that their books sell enough to actually be able to write another book rather than go back to accounting or underwriting or the law or whatever it is.

In my interview with Jane Dystel, of Dystel & Gooderich, she wrote:

Yes, I believe the industry is run by sales and marketing and business types — no editors. This means that there is a strong likelihood that the quality of the books will decrease. I fear that eventually the only things that will be published are currently well known bestselling names and commercial fiction.

Books to publishers are interchangeable widgets. Some publishers do not value their writers. They don’t foster growth within the writer’s career. They don’t give marketing dollars nor do they give marketing assistance except to the big names. This is not the editors fault or the publicity departments fault. It is the vision of publishing that is handed down by the presidents and vice presidents who are so far removed from the grind and glory of writing that publishing is nothing more than a factory line of paper and glue.

Part of why I continue this blog, not why I started, but why I continue it is that we can promote the books that we love. So that I can natter on non stop on how much I liked Eve Kenin’s Driven, Elizabeth Hoyt’s The Serpent Prince, Claudia Dain’s The Courtesan’s Daughter. I promote these authors’ books because I am selfish and want them to keep writing and I fear for these books that if they don’t find an audience, I will be left with one bland Regency historical after Navy Seal after Vampire book after another.

Nora Roberts commented that authors are not their fictional characters and dressing as them blurs that line and leads to a disrespect of the genre. I hear where you are coming from, La Nora. I do. I understand that after striving for respectability, the big ass swan hat being featured in the news the next day is not the image you want of romance. But what are authors to do?

Some authors don’t want to be pushed into that. Some authors want to be able to write the best book and just have their work stand on its own. In today’s market with a burgeoning publishing schedule, a decreasing market, and increased entertainment avenues, authors cannot simply write a good book and have success come to their doorstep.

A good book, on its own, will not sell itself. A good book with a gimmick might.

The fear is that if Mancusi and Maverick succeed with their marketing strategies, to become successful the burden for creative marketing becomes exponentially higher and more terrifying, particularly the more introverted the author is.

It is not Maverick and Mancusi’s fault for dragging romance down to the point that they need to a gimmick to sell their books. It’s the publishers fault and their failure to properly fund marketing for the books.

Romance and respect is something I long for as well. If anyone would read the 100+ comments at the Smart Bitches, they couldn’t help but be impressed at the level of discourse. The criticism of Maverick and Mancusi seem to stem from the fear that this is what will be demanded of an author to be successful, that their work cannot stand alone.

I believe that, except for a tiny few, this is true. It is not enough to write a good book.