Is Romance Heeding the Call of Nature? 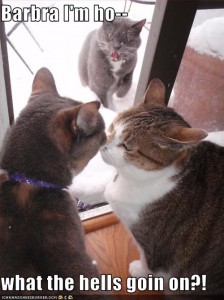 In my last piece, Morality and Romance, I suggested that the genre reflects a historically entrenched double standard around female sexuality, namely that what is largely tolerated or even embraced in male protagonists – rich and varied sexual experience – is disparaged in female protagonists. So-called Dukes of Slut can be heroic, but not Duchesses of Sexual Liberation.

A small debate broke out in the comments – as often around this particular issue – over whether Romance is merely reflecting nature’s wisdom and biology’s programming:

The fact that there are biological differences between the genders does not negate the fact that cultural imprinting is alive and well. If one gender gets to have indiscriminate sex and the other doesn’t that’s a double standard regardless of whether one gender’s biology might predispose them to it. Especially, since we pride ourselves of not being "all animal" but civilized and able to overcome our instinctive behavior.

To which Dick responds,

I don’t disagree with what you wrote, actually; society does impose constraints on its members. The question really is whether society develops those constraints, given the biological, emotional, physicological differences between men and women, because they are pragmatic recognitions of those differences or because it wants to give women fewer opportunities for sexual expression.

Although there are several manifestations of the argument Dick makes, they all seem to proceed from the rather uncontroversial premise that men and women are physically and emotionally different. From there, the conclusions range from assertions that men are biologically destined to "spread their seed" as widely as possible to arguments that women are programmed to bear and nurture their young, resulting not in a sexual double standard but rather the reinforcement of biological and evolutionary programming that posits males as naturally promiscuous and females as naturally monogamous.

Despite whatever scientific and social data exists to contravene these assertions (not the least of which is the impressive rate at which female infidelity is climbing), let’s put that aside and accept these precepts as true. Let’s embrace the idea that men are naturally predisposed to polygamy and women to monogamy and then proceed with a consideration of Romance. A genre that celebrates romantic love, primarily monogamous love.

Okay. So if in the main genre Romance has traditionally been aimed at celebrating monogamous romantic love, and men are biologically programmed to be sexually polyamorous, then the substantial threat to the success of the monogamous love relationship would be the hero’s basic nature, right?

Except how many Romances have you read where the heroine has to worry about the hero’s cheating, especially after she’s worked the magic of the magic hoo haw on him?

Historical Romance is often open about this, what with so many of its heroines virgins and so many of its heroes compelled to marry a virgin (or marry the heroine after he has taken her virginity). In Loretta Chase’s Don’t Tempt Me, which a number of people defended in the comments of my last post, what urges Lucien to ask Zoe’s father for her hand in marriage is a somewhat belated sense of honor that kicks in after he has hastily and precipitously rid her of her inconvenient virginity. While in Carolyn Jewel’s Indiscreet, the heroine’s alleged loss of virginity, to a man who is not the hero, is launched as a weapon to destroy her reputation and put her beyond easy eligibility for a good marriage. And in Mary Balogh’s The Secret Pearl, the hero feels free to use the heroine when he believes her to be a prostitute, but once he realizes she is a virgin, he is beset with a terrible guilt that develops into the forever kind of love we look for in Romance.

Whether or not this equation of a woman’s worth to her sexual status is historically sound logic (and there are many, many layers to this analysis that do not all yield a conclusion that it is), it is a standard construct in historical Romance, with the couple rewarded by true love, often against a tradition of marriage for economic gain or family alliance.

Contemporary Romance, though, is more of a challenge, because practically speaking, women should not have to rely on the currency of their sexual purity to make a good marriage match. And yet, we know this not to be the case. Take Victoria Dahl’s first contemporary, Talk Me Down, which garnered a review in which the reviewer compared the heroine, Molly, to "a dog in heat." As if a woman who enjoys sex and embraces her sexuality with abundant enthusiasm is not only inhuman but mindlessly obeying a biological imperative to reproduce. That’s an interesting conflict, to say the least.

About 15% of the comments here are about how terrible this is for the girl… And yes, there is a double standard with men and women. A girl who does this is a slut. A guy who does is a stud. Complain about this all you want, but that’s the way people will look at it until the end of time.

To which another commenter responded with what is not, apparently, quite so obvious, namely, that "The reason it will never change is because people choose to perpetuate this bullshit, dude."

Let’s put aside the question of whether this is a double standard and focus specifically on the question of value. In this example, the girl’s value is being expressly equated with the perception of her sexual promiscuity. A male member of her family has put this at issue and has put this young woman at risk on several levels. And note, too, that we don’t know what the girl’s sexual status is – merely the creation of a document suggesting sexual polyamory changes her currency as a female. And because she is being judged a "whore," it seems we can elicit a conclusion that sexual polyamory devalues a woman’s reputation.

So going back to the question of whether these views mirror some biological or psychological or historical imperative, even if all that were true, I don’t think it’s the critical issue. For me, the critical issue is that as a society we continue to value a woman’s sexual status and we give value to women (or take it away) based on this status. Society justifies whether a woman deserved sexual assault or even rape based on whether she appears sexually demure enough. We judge a teenage girl as "whore," all the while young teen girls are giving young teen boys blowjobs in junior high playgrounds. It’s the age-old paradox in which the boys love these girls when they’ve got the goods in their mouths, but afterwards, not so much. And for the grown-up version of this scene, check out this story at Jezebel about a “glamour competition” in England and what they call the “hook-up culture.” I find particularly compelling the call to focus on “the question of whether we’re freely choosing our behavior, and how we can help younger women do so,” and to move away from the notion of “promiscuity” and all of its negative connotations.

So what does this mean for Romance? In many ways, the idealization of love in Romance functions as socially subversive, especially when at any given moment, more than 50% of couples are divorcing. So why is it that in Romance, where enduring love and happiness comes to the brooding, depressed, disfigured, sexually promiscuous hero, the heroine still has to avoid becoming "a dog in heat"?

Men and women may be different, but is it really biology that leads us to value a woman by the currency of her sexuality? And how does Romance perpetuate or challenge this valuation?

One thing I’m seeing more of in the genre is heroines who have been damaged by sexual promiscuity. Elle, from Megan Hart’s Dirty, for example, punishes herself with emotionally disconnected sex (and yes, I absolutely consider a Romance, especially since Elle and Dan end up married, living in the suburbs, and contemplating a family). Jane, from Victoria Dahl’s Lead Me On, is suffering the shameful effects of teenaged sexual promiscuity as a reflection of low self-esteem. In one sense I appreciate the willingness to investigate the darker connections between self-esteem and sexuality in Romance heroines. But I also think it’s interesting that the sexually promiscuous woman written within a construction of romantic love often endures a great deal of shame or punishment (inflicted by others or by herself) before she receives the gift of romantic happiness. Those heroines who are unashamed of their sexual polyamory may, more often than not, be pushed into erotica, where there is no expectation of a romantic happy ending.

While there is rarely ever a question around whether the hero – the one who is supposedly more at risk of resisting monogamy – will be a faithful spouse, do we, as women ourselves, distrust that the heroine will be? If not, what are we doing by perpetuating this evaluation of a woman’s worth by her sexual status? What are we saying, as readers and writers of Romance, about how, why, and under what circumstances, women can be, should be, will be, loved?