In Search of Brenda Leigh Johnson 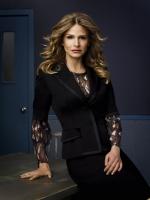 Last night was the season premiere of my favorite television show, The Closer. For those who haven’t watched the most successful basic cable show in the history of cable, the show revolves around Brenda Leigh Johnson, played by the indomitable and sexy Kyra Sedgwick. Last fall Sedgwick won a Golden Globe for the portrayal of the tough as nails Deputy Chief of LAPD’s Priority Homicide Division.

Currently, there is no other TV show like the Closer; no drama is assembled around a main female character, particularly one in charge. Brenda Johnson is CIA trained interrogator who is brilliant at obtaining confessions. She is capable of gulling out the confession through sugar and pounding it with anger. She’s whipsmart; taking down criminals, meting out her own brand of justice, all the while wearing skirts and heels and a southern drawl. No one would describe her as kick ass and I don’t think she could chase down a criminal if her life depended on it. But everyone around her knows that once the criminal is caught, she owns him. Her strength lies between her ears.

She’s what I hoped to read about in the now defunct Bombshell line and every time I pick up a romantic suspense. Yet Brenda Leigh Johnson is just as elusive in print as she is on the small screen. Authors have a hard time portraying their female characters as competent, yet feminine. This is true within the romance genre and without.

The female archetype of silk clad steel always wins me over and it is one reason that I love the oft lauded, Lord of Scoundrels by Loretta Chase. This book, with the clinch cover and the cliched title, remains one of my top romances of all time for the pure and simple reason that up until that point, I had never read a romance heroine like Jessica Trent and have rarely encountered her equal since.

Jessica Trent, like Brenda Leigh Johnson, knew the power of her femininity. She didn’t attempt to masculanize herself in order to appear strong and equal. She knew she could reduce a man to quivers just by a glance, by the twitch of her glove.

“Dain,” she said in a low, hard voice, “if you do not release my hand this instant, I shall kiss you. In front of everybody.”

He had a ghastly suspicion he’d kiss her back—in front of witnesses—Dain, Beelzebub himself, kissing a lady—a virgin. He crushed his panic.

She stood with aplomb under an assault from Dain to humiliate and embarrass her.

“Perhaps I had better demonstrate how the thing operates,” said Dain, yanking her attention back to him.

In his low voice, Jessica recognized the too innocent tones that inevitably preceded a male’s typically idiotic idea of a joke. She could have explained that, not having been born yesterday, she knew very well how the timepiece operated. But the glint in his black eyes told her he was mightily amused, and she didn’t want to spoil his fun. Yet.

“How kind,” she murmured. “When you turn this knob,” he said, demonstrating, “as you see, her skirts divide and there, between her legs, is a—” He pretended to look more closely. “Good heavens, how shocking. I do believe that’s a fellow kneeling there.” He held the watch closer to her face.

“I’m not shortsighted, my lord,” she said, taking the watch from him. “You are quite right. It is a fellow—her lover apparently, for he seems to be performing a lover’s service for her.”

And turned it around in her favor.

All Dain could ascertain was that the female wore a blue overgarment of some sort and one of the hideously overdecorated bonnets currently in fashion.

“I particularly recommend,” he went on, his eyes upon the female, “that you resist the temptation to count if you are contemplating a gift for your chere amie. Women deal in a higher mathematical realm than men, especially when it comes to gifts.”

“That, Bertie, is a consequence of the feminine brain having reached a more advanced state of development,” said the female without looking up. “She recognizes that the selection of a gift requires the balancing of a profoundly complicated moral, psychological, aesthetic, and sentimental equation. I should not recommend that a mere male attempt to involve himself in the delicate process of bal-anting it, especially by the primitive method of counting.”

She was sharp with her tongue and thought more often with her head than her heart. When faced with ruin, she took action and, in one of the most memorable romance book scenes ever, exacted her revenge.

Then Dain saw her.

She wore a dark red gown, buttoned up to the throat, and a black shawl draped like a mantilla over her head and shoulders. Her face was white and hard. She strode toward the large table, chin high, silver eyes flashing, and paused a few feet away.
…
She flung back the shawl and lifted her right hand. There was a pistol in it, the barrel aimed straight at Dain’s heart.
…

I can’t tell you how it ends. You’ll have to read the novel yourself.

Too often, the heroine is described as strong when she is physically strong. Perhaps Elena of Kelley Armstrong’s Bitten typifies the strong, kick ass heroine. In TV, it would be Alias. Yet, Brenda Leigh Johnson, in her skirts and heels, is no man’s fool. She’s strong, capable and always, always gets her man, even if she sometimes contorts the rules to do it. She is not afraid of her power, either as a woman or in her job. Sure, Brenda has some personal problems. She is slowly learning to be a better partner to the adorable Fritz, but the characterization of this woman is so transfixing that I cannot help but want to see her between the covers of a book within my favorite genre.

This is not to say that all romances are devoid of women writing strong female characters but in a genre dominated by females, the male character gets the greatest attention, the greatest care, most of the time. In JR Ward’s series, The Black Dagger Brotherhood, each male is a unique character and carefully drawn. He wears a particular type of cologne, a particular brand of pants, drives a particular car. They have specific hobbies, roles, relationships within the Brotherhood. The women are defined by the color of the dress they wear to the commitment ceremonies. They aren’t as lovingly drawn and are forgettable while their male counterparts are not. Then there are the dukes, the earls, the marquis that dominate the historical landscape. And the male cops, the FBI agents, firemen that dominate the contemporary landscape.

There are women writing strong female heroines. Karen Rose pens excellent romantic suspense novels featuring law enforcement officials. Nora Robert’s July release, High Noon, features a competent hostage negotiator. Lilith of Demon Angel by Meljean Brook is no slouch in the saving the world in high heels department. I think women are desperate for good female archetypes and that is why cross overs have such appeal. In urban fantasy that is gaining readership from romance, the trope generally features a first person narrative by a female who is not always physically powerful but is responsible for a successful outcome. Mercy Thompson of Patricia Briggs’ series is an example of a heroine with little power except to resist magic.

Maybe if we brought a few more Brenda Leigh Johnsons into the romance world, we would gain readers instead of losing them.