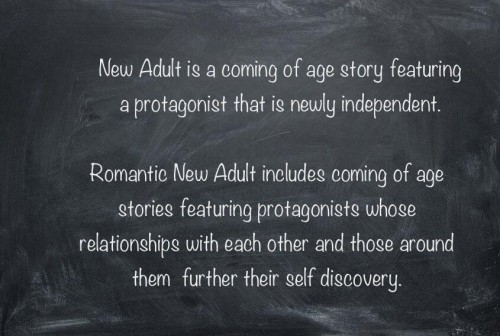 The above is my own definition for the New Adult genre.  In 2009 St. Martin’s Press announced it would be acquiring books for a “New Adult” line and held a submission contest but  by 2011, SMP had not yet delivered on the promised new line despite interest expressed by readers online.  Georgia McBride, author (Praefatio) and founder of #YALitChat and publisher at Month9Books, hosted the submission contest and shared that two submissions — The Girl of Thorn and Fire by Rae Carson and The Treachery of Beautiful Things by Ruth Frances Long — went on to be published by other publishers.  Ms. McBride told me:

New Adult is a fabulous idea in theory, and authors seem to be excited about it. But in a world where bookstores shelf by category, to them, it is either  Adult or Young Adult. Some booksellers even call their YA section “teen.” And when you have a character who is over a certain age (19 seems to be the age most consider the start of New Adult), it is received as Adult. In some cases, the designation by publishers causes more confusion than not.

Let’s face it, YA is associated with teens, and at 19, most no longer consider themselves teens. So, it would support the theory of placing these “New Adult” titles in the Adult section. However, with the prevalence of eBook content, it would seem that the powers that be could easily create a New Adult category if they really wanted to.

When I first heard of New Adult I wasn’t convinced it would interest me a great deal.

After I read Katie McGarry’s Pushing the Limits which featured high school seniors on the cusp of adulthood, I realized I wanted to read more about the characters in that transitional phase of their life, primarily because the issues that the characters dealt with were relatable to me, even as an older adult. Finding more books like this was a challenge so I put out a call on Twitter for college aged protagonists.

Author Julie Cross (The Tempest) recommended Easy by Tammara Webber (reviewed here). Last Sunday, self published book Easy by Tammara Webber was 29  on the NYT combined ebook list. Easy is a genre defining book. In other words if you are wondering what New Adult is about, Easy can help you understand.  After reading Easy, I went on a New Adult glom burning through Webber’s backlist and branching out to titles Something Like Normal by Trish Doller and Where She Went by Gayle Forman.

New Adult books feature characters with slightly older teens or in their very early twenties. They are more commercially accessible coming of age stories, ones that take a look to life beyond school. They are learning who they are and how they are going to respond to adult challenges. Moreover, and this is important to me, they are fairly independent.

Over the last few months, I’ve read several New Adult books. I’ve been recommending them and adult readers here at Dear Author have been enjoying them. I am seeing more and more readers ask for New Adult books. With the help of Julie Cross, we have compiled a list of New Adult books that we’ve either read and recommend or that come recommended by others.

Have others to recommend to us? Intrigued or put off by the New Adult concept?  Let us know.