Harlequin Is Like Your Parents, Constantly Embarassing You Every Time You Try to Be Cool 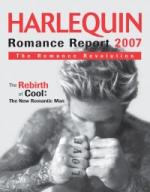 In the recent RWR (Romance Writers Report) from RWA, there is an article about what RWA is doing to improve the image of romance. RWA, at the behest of its membership, formed the “Image Committee.” The goal of the Image Committee was to “improve the public perception of the romance genre and promote the overall image of romance fiction.” After “enormous deliberation”, it was decided that the Image Committee would be dissolved. Instead, RWA will be working toward with full time marketing professionals to implement a national marketing plan to improve the general public’s opinion toward romance novels, authors and readers.

First thing would be for the marketing folks to get with Harlequin. Harlequin, bless your sweet heart, you do offer a wide variety of books that appeal to a broad spectrum of readers. Your catalog runs the gamut from sweet to sexy, from lighthearted to somber, from fantasy fiction to fantasy erotica. Jayne and I both enjoyed Kathleen O’Reilly’s Beyond Breathless (Harlequin Blaze). But oftentimes, you are like my parents, constantly embarrassing me at every turn.

Recently, Harlequin released its 4 color glossy 21 page Romance Report of 2007. This report is sent to the press, booksellers and I guess, made available at RT for readers and whomever. For those not in printing or marketing, 4 color glossy 21 page brochures are very very expensive. Of course, they could be producing these in house and probably are, but still its costly.

In the press release which Harlequin authors, it provides the following as an excerpt from the report:

Americans seem to always be on their PDA’s and cell phones, hard at work wherever they are. Or are they? There may be another reason men and women are intensely typing away on their electronic devices, and it isn’t business. Harlequin’s Romance Report 2007 found that more than 55% of men and 47% of women in the U.S. have sent a sexually explicit email, text or instant message to someone – proving you just may be able to mix business and pleasure.”

There’s some tips on being more romantic: How to stage a romantic intervention. How to be a better Significant Other. What is this COSMO? And if so, where is my quiz?

Harlequin’s promotional effort says less about its attempts to be fiction for women and more about the misconception that every woman who reads romance must necessarily be seeking love, whether it is from the “new romantic male” (who tattoos his fingers) or whether it is obtained in exciting places like Nepal. It’s not about how smart we readers are. What a broad spectrum of women reader’s ethnicity may be. It’s not about how diverse the reader’s tastes are. It’s about how to catch a man in five days in 10 different places.

Harlequin doesn’t really know this reader. If they did, they would know that I want to be known for more than being able to send dirty SMS messages on my Motorola Q.

→ Jane
Previous article: REVIEW: Why is Murder on the Menu, Anyway? by Stevi Mittman
Next Post: REVIEW: Count to Ten by Karen Rose