The following is a guest post by author Sherry Thomas who self published an anthology with Courtney Milan and Carolyn Jewel.  She offered up an unusual story about cover art in the digital age.

The book cover as a marketing tool interests me. Whenever there is a good blog post or a talk, I stop and pay attention.

But most of the available opinion, advice, and debate I’ve come across are centered around physical publishing, when a cover is meant to fetch you from across the store and get you to pick up and fondle the book by using various colors, textures, and contrasts. Nowadays, a great deal of publishing is done on a digital-first basis, and in this new environment, authors looking to have their books discovered must judge their cover designs with a modified set of standards, as I learned from the design process Courtney Milan, Carolyn Jewel, and I undertook for MIDNIGHT SCANDALS, our historical romance anthology.

Courtney served as our cover designer. It was decided early on in the process that we would use a stock photo, most likely a woman in a bridal gown, as the beginning point of the cover image. As Courtney put it, “My theory is that as long as it looks like a pretty dress, it will convey ‘historical.’ I don’t see a cover as anything except a marketing device. If it conveys subgenre and looks pretty in both thumbnail and larger version, it works for me.”

This is what we started with. Since the title of the anthology is MIDNIGHT SCANDALS, it seemed appropriate to go to bat with midnight blue. Courtney sent the preliminary design both in thumbnail size and in large size.  I, being a complete neophyte in terms of digital publishing, went immediately for the large size.  At this point in my career, I’d looked over a number of cover designs and my sage thought on this particular cover?  I fretted that the material on the gown looked like it was made of foil.

You are seeing but a small sample of the close to thirty variations Courtney generated.  At this point, I was still looking at the covers in full size.  Carolyn, probably realizing at last how clueless I was, said in her next email, “I opened all the images on my desktop as thumbnails.  I think thumbnail size is REALLY important.”

And you know she was not talking to Courtney, who already knew how important thumbnails are.  J This is what Courtney said on the point, “My theory on covers is that you have to design for thumbnail first: if the cover doesn’t draw the eye, nobody will click on it. If nobody clicks on it, it’s a losing game. I see covers that are crappy, crappy up close selling extremely well, and covers that are gorgeous up close being relatively lackluster–and it’s all a question of “does the cover stand out in the pack?”

How does one decide whether a cover stands out in the pack?  One field tests.

“The proper way to do a field test,” noted Courtney, “is to bury your cover in a montage of images of other covers in your subgenre. Hide it somewhere in them. Look away, and then look back at the covers. How long does it take you to find yours in the big heap of images? If it takes a long time, your cover isn’t visible enough.”

Below is our cover in a field of 15 other romances. Can’t find it?  Neither could us.

Our cover, in a different color combo, against the field. Again, our cover was really hard to find, wasn’t it?

This is what Courtney observed: “The one thing that struck me about making the first two images is how much my eye was consistently drawn by the cover for The Blue Devil, which you wouldn’t think from looking at the cover in full length. In that cover, it’s the contrast between the dress and the background that makes you look first.”

Carolyn remarked in addition, “Overall on the image montages, I’m surprised by how muddy so many of them look. I agree that the Blue Devil cover is a win in thumbnail. The one with the yellow dress is also eye-catching: simple with good contrast and color combos.”

And I just sat there, thinking, 1) I had no idea it was possible to be this meticulous (you are only seeing a fraction of the number of field tests) and 2) I so wish I’d gone through this process with these ladies before I judged the designs for my own overseas backlist self-pub covers.  I would have used a completely different set of criteria.

So now we decided that what we wanted was a high contrast color scheme. Courtney went back to her magical software and out popped another half dozen field test.  I’ll show you just this one. It is absolutely remarkable how much better our cover pops against the field, with this new color combo.

(Until about this point, I’d preferred the blue dress, worrying that one could see the photoshopping on the orange dress from a mile away.  After the field test, it was orange dress all the way.)

Now that we’ve nailed the general color combo we wanted, I thought we were done.  Not so fast.  Next Courtney had us examine “super-tiny thumbnail images in both color and black and white.”

The thumbnails were 50×75 pixels.  Why were we looking at covers of that size?  Because one of the venues we were designing for is people who browse directly from their Kindle device—in black and white, in other words, so the color contrast won’t show up.  So along with how well a cover performs in color, we also must pay attention to how it looks in grayscale—while at a tiny, tiny size.

“It may sound ridiculous to design for viewability at 50×75,” wrote Courtney, “but this is how word-of-mouth happens. Look at the attached screenshot, and ask yourself what Tia is reading. That author just lost the chance to have hundreds of people see her name because it was mentioned in the thread.”

This is the screenshot Courtney was talking about.  Goodreads, if I’m not mistaken. 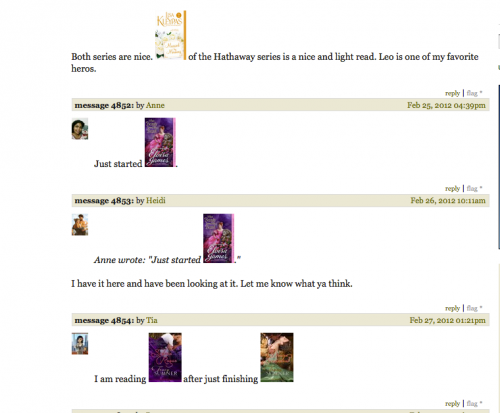 And indeed, look at those two books Tia was reading.  I couldn’t—and can’t—make out either the author’s name nor the titles.

Courtney continued, “If someone really wants to know, sure they can click on the book… but she’s just lost the chance to have a reader do some unconscious advertising and get her name out there, because the book cover was not designed to take advantage of how book covers are viewed in social media.”

This also answered a question that I had from the very beginning, namely, why our names were so freaking huge on the cover.  I’d thought it was because, well, without any publisher holding us to a tier system, we could all have name fonts as big as #1 NYT bestsellers’.  Nope, it was because Courtney had been designing with 50×75 thumbnails in mind from the beginning.

We adjusted the background color slightly, because that particular shade of green as the background look somewhat strange in full size. We had some issues with typography to resolve as well. We switched our names around in an attempt to get the bottom name to clear the model’s skirt.  In the end, we shrunk the size of all the names a little so the L in JEWEL would be clearly visible, rather than lost in the orange folds.

Here is the final design in various sizes. 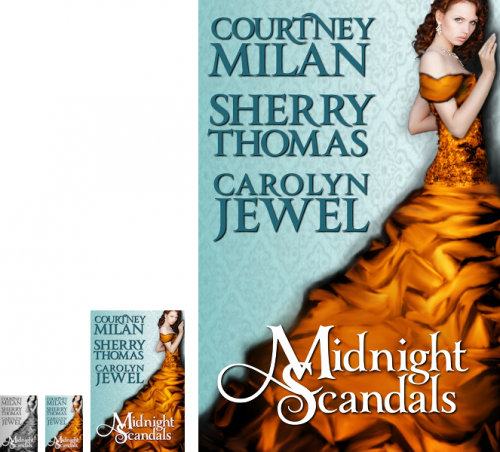 Unfortunately, Courtney does not hire herself out as a cover designer.  But I took what I learned from this digital publishing cover process, i.e.,

Frauke Spanuth, my designer at CrocoDesigns, gave me three color schemes.  They all looked great in full size.  And they did not look bad in thumbnails either.  Big, visible fonts, high contrast, simple design.  (My name is not on the cover by choice; the story, in the trilogy, is specified as having been written by “A Gentleman of Indiscretion.”)

Aha, the title becomes much harder to see in the third one.  Bye-bye, third one.

The next step, grayscale for the survivors.

Now the first one has lost all contrasts.  And we have a winner. I skipped the field tests, because, well, I’d just rather Courtney do them for me.  But you should definitely make them a mandatory part of your cover design process.  :)

Anyway, I hope this post has been of some use and/or interest to you.  And if you have digital cover design tips of your own, feel free to share them in the comments.

You can learn more about Sherry Thomas here (and The Bride of Larkspear is scheduled for a Sept 30 release); Courtney Milan here; and Carolyn Jewel here.  Midnight Scandals is currently for sale.